There is a fine line between representing other people’s suffering and perpetuating it. In much contemporary art the exploitation of misery could be termed ‘poornography’ 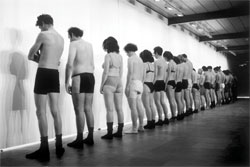 ‘The tone of your voice is filled with humanity. I dislike a humanity forged by the contemplation of suffering.’
André Malraux

At a recent exhibition at the Zurich Helmhaus entitled ‘Welt – Bilder’ (World – Images) pictures by Boris Mikhailov, Wolfgang Tillmans and others were seen alongside those of celebrity photojournalist James Nachtwey, famous for his black and white tabloid pleas to pity the Little People in times of war. It may seem inelegant curating to lump together photographic art work with the netherworlds of reportage bathos, but it begs the question of what is the genuine difference between the unabashed miserabilia of a Mikhailov and the flinching frisson of a Nachtwey. Does the artist’s aura – sheer formal brilliance combined with the hint of privileged access to ideological truth – absolve the former from the accusations now routinely levelled at the mainstream media when it comes to that career-enhancing practice that I would like to term ‘poornography’?

Unless I’m very much mistaken, the complicity between the representation of indignity and its perpetuation is rarely tackled head-on in the arts – and to do so in any serious way would demand far more space than is available here. While it may not be too difficult to expose the abusive subtext of art-that-points-the-finger, one would still, in my view, need to go beyond mere finger-wagging of one’s own, to offer some set of guidelines by which to judge a mode of art production that is becoming the rule.

The market demand for quick-fix solidarity, living-room worldliness and that cushy sense of ideological superiority through critical consumption is a phenomenon that supersedes any particular exhibition context. We all love being flattered by our own ideological credentials; the resulting complex spread of Body Shop hermeneutics demands criteria that go beyond the rigid dichotomies of fascination versus critique, voyeurism versus empathy, help versus profit. The issue is particularly pertinent in contexts of heightened military violence, which usually elicit predictable examples of sentimentalized (counter) propaganda or even more depressing retreats into insular navel-gazing.

An exception in terms of heightened sensitivity towards violence and sensationalism in the arts is Santiago Sierra. The stock accusation is that Sierra’s performances, and his documentations thereof, do not so much expose exploitation as reproduce it, or, if you will, that his reproductions are not so much representational as material; another line of thought appreciates his work precisely because it brings to a point the collusion between symbolic and physical forms of abuse. Tragedies that are usually given the once-over as touching visitors from that land of the referent outside contemporary art are posited as power relations that are eerily home-grown, at times allegorizing the whole High Art world into one big Sierra performance. (I remember museum staff happily slaving away overnight just in time to serve the sponsored Moët et Chandon at one of his openings, and dismissing the exploitation as inevitable managerial hypocrisy – or excusing it as a noble sacrifice for some higher cause.)

Sierra can be accused of relying on participants’ submission to his rules of the game, but when he naively demands that their pain be read as hyper-authentic experience truthfully documented, or interleaves the performances with art-historical props or requests that host institutions do the dirty work of recruiting and briefing, it raises questions that strip him of the traditional refuge of enraged intellectual (press conferences, boycotts, deconstructions). Instead, they revisit the very possibility of radical critique in the traditional sense of the term.

Compare Thomas Hirschhorn, whose work is contingent on a discourse of unveiling a depravity that he can rise above, be it media warmongering, Switzerland or the museum walls of Documenta. Most recently, in Francesco Bonami’s exhibition ‘Universal Experience’ at the Hayward Gallery in London, Hirschhorn merged poverty with pornography by using cut-outs from explicit magazines to demonstrate that porn, tourism and the evening news are kinda the same and all totally fucked up. The images are of utter newsrack banality, but Hirschhorn, by installing them in an art context while pointing the proverbial finger of artistic critique that allows you to get away with murder, has managed to make them spicy, significant and auratic all over again.

I am taking issue not with Hirschhorn’s voyeurism per se but with the manner in which an authorial persona is constructed that morally supersedes it, even extending the offer of redemption to the museum audience itself. Indeed, to de-spectacularize is hardly an option. Ever since the Iliad, the spectacle has been part and parcel of the narratives by which human affliction has been communicated, and the artist has played an honoured role in this regard. To quote Tom Holert, the ultimate prize for any ambitious creative worker must be a war of one’s own, the way the Spanish Civil War will forever be Ernest Hemingway’s and Pablo Picasso’s. (Arguably, AIDS is now Keith Haring’s, while Nachtwey has Rwanda and even Jean ‘Desert Storm n’existe pas’ Baudrillard has left his mark.)

In the most recent canonical contribution to the debate on the pain of others Susan Sontag wrote of the ‘pulse of Christian iconography’ in latter-day wartime photographs. It is with Francisco de Goya, Sontag argues further, and his aimed ‘assaults’ on the sensibility of the viewer in ‘The Disasters of War’
series (1810–20), that a ‘new standard for responsiveness to suffering’ enters art. But even when the engagement becomes a kind of assault, Sontag – retracting what she maintained in On Photography (1977) – insists that the accusation of violent imagery blunting the audience’s sensibility has been a knee-jerk, unreflecting accusation since 1800, and that it has yet to render any evidence whatsoever. Scepticism regarding images of suffering is usually due to the absence of reverential circumstances in which to view ‘grave’ material, obviously a question of form and context over content, since anything from Moscow alcoholics to hollow-eyed Rwandans is potentially subversive, heroic or even something more.

The possibilities for exploring these matters of visual tradition and audience reception are legion. The Helmhaus merger of Newsweek and art photography aside, one might consider the tracing of complex iconographies of solidarity in Hito Steyerl’s film November (2004) or the interactive peep-show of backwoods squalor in Ahmet Ögüt and Sener Özmen’s Coloring Book (2004) or Miguel Calderon’s Inverted Star (1999), in which a tiny sum of money is offered to any willing participant ‘possessed by the devil’. The video tops Sierra by raising similar questions without overlooking those of play and self-representation, since the participants are – presumably – play-acting their pain for the camera.

Since the difference between misfortune and its emotionalized consumption in video installations and food fairs is, for better or for worse, increasingly blurred, the above gestures become more and more significant. At the risk of sounding trendy, to show one’s complicity in the blurring of referents, and to dispel any smatterings of heroism and healing, is the least one can do. The
challenge, in other words, is not to summon selfless goodwill or progressive content, but to find intelligent forms of voyeurism – that is, a mode of visual production that faces up to its own strategies of entertainment, infotainment and/or objectification. I think there’s much to say for strategies that are blunt without being retrograde, and that elude simple notions of solidarity and empathy in favour of an analysis of our very fascination with the outlandish, be it touching or violent or both.