The most recent work in this mini-retrospective, Ruff's series 'Nudes' (1999-ongoing) continues his probing of the claims made by photographic images to present the 'truth'. In nudes ez03 (1999), the stock suburban furnishings of the readers' wives shoot are transformed into a liquid Morris Louis colour field. The image starts to malfunction without the chain-store normalcy of an Axminster rug, and we realize that despite porn's utilitarian directness, even such low-rent representations depend on a certain visual rhetoric. Ruff's animated smudging of the rutting figures in nudes em08 (2000) disrupts the waxwork stillness of the jazz-mag action shot, where models stop mid-thrust to allow the cameraman to adjust his shutter speed. All porn really shows us is people posing for photos, and Ruff's point is that these staged images only attain a 'truth' in the fantasies they generate. It's an argument underlined by nudes sh02, in which a glamour model sports Kim Basinger's cut'n'pasted head. We're reminded of her role in Curtis Hanson's LA Confidential (1997), where she plays a hooker made up to resemble the actress Veronica Lake. Desire is at ease with this chain of simulation, as long as we can scrunch up our eyes and half believe it's the real thing.

Right now, Postmodern posturing about the nightly news seems pretty shabby, and it's hard not to bring this discomfort to Ruff's series 'Nacht' (Night, 1992-6). Following the Gulf War, Ruff bought an image intensifier and designated Dusseldorf as a 'theatre of war'. Nacht 17 III (1992) shows a cosy cul-de-sac glimpsed through green night vision goggles. Nothing much is going on - a hatchback is parked in the drive, low-level lighting seeps from the upstairs windows as the occupants prepare for bed. The scene is tinged with a certain Silence of the Lambs (1989) paranoia, but a vaguely spooky suburb doesn't really say much about a blitzed Baghdad, stripped of meaning by CNN's instant transmission. A milky house plant targeted by the image intensifier, Nacht 13 II (1993), is much more affecting. The weedy cousin of the pumped-up trees beyond the sitting room window, it's a reminder of the video-game language of the conflict, where the ability to drop a missile down a chimney pipe was treated like a Nintendo expansion pack.

Ruff has commented that 'our image models are the images in the media. My images are not depictions of reality, but show a second reality, the image of the image.' It's a truism that speaks through his 'Zeitungsfotos' series (Newspaper Photos, 1990-1). Headlines and column inches scissored away, these scaled-up photos become the whole story. A kiss from Valentino stands in for love, and protesting kids on a dusty street wrap up 40 years of Palestinian suffering. Ruff's refried media studies seminar feels dispensable, illustrations to worn-out theories. He's more successful when he turns to the stars. A computer-enhanced observatory photo, 22h 00m / -50º (1992) compresses time and space onto a flat, vinyl-black surface. The piece reminds us that light from dead stars speeds towards us at a million miles per second, an oddly comforting thought in a show preoccupied with distortions of history.

Gustave Flaubert described language as a 'cracked kettle on which we beat out tunes for bears to dance to, while all the time we seek to move the stars to pity'. Seen today, Ruff's semiotic explorations only come alive when they touch on the ineffable: desire, fear and looming night skies. Maybe it's the times, but worrying away at ideas of the hyperreal suddenly feels like old news. 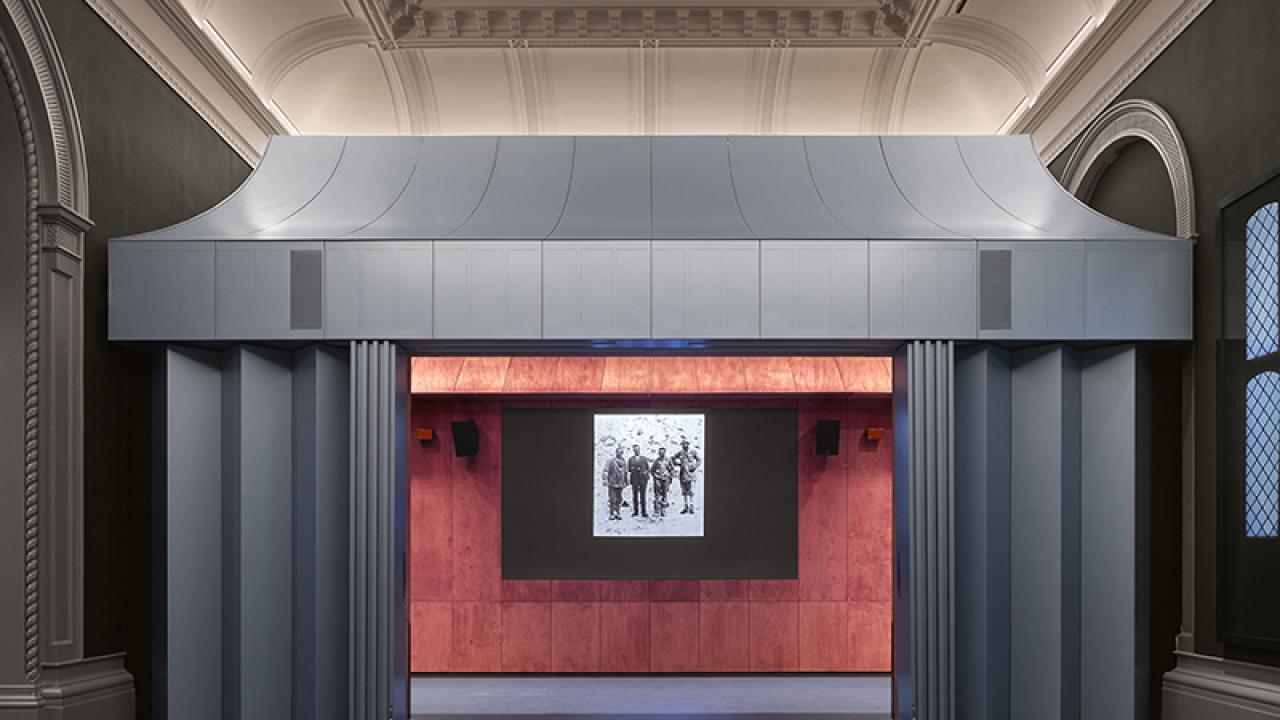 Opinion
From Negatives to Pixels: Alternative Histories at the V&A’s Photography Centre

In an age when the camera is continually absorbed into other technologies, this inaugural show focuses on photography as practice