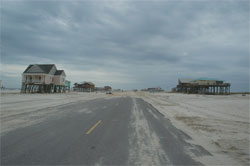 In Edgar Allan Poe’s A Descent into the Maelstrom (1841) an old man relates the story of his confrontation with the forces of nature. A daring fisherman, he and his brother sail the Moskoe-ström, a deep-welled narrow of water that on occasion is transformed into a ferocious spiralling funnel of tidal destruction. In confronting the risks of an unknown, mysterious phenomenon Poe’s protagonist undergoes a profound change that alters his hair colour as well as his soul. Yet the jeopardy of working the treacherous waters does not deter him from his efforts. Poe places this gamble in the fisherman’s mind: ‘we made it a matter of desperate speculation – the risk of life standing instead of labour, and courage answering for capital’.

Poe’s story is an assessment of ex-urban reality, of human life seeking subsistence at the threshold of the uninhabitable. Like Poe, the Center for Land Use Interpretation’s (CLUI) recent project ‘Vacation: Dauphin Island’ gives us a view of speculative inhabitation of potentially ruinous environs. Dauphin Island is little more than a low, indefensible sandbar holding back the forces of the Gulf of Mexico from a stretch of the Alabama coast. While in recent years Dauphin has become primarily a vacation spot, early settlers once called it, with not a little prescience, Isle Massacre. Despite the semi-annual catastrophic storms that sweep over the area and serve as nature’s warning against domesticity in the soft sands, Dauphin Island has evolved a peculiar sense of provisional (read: ‘insured’) architecture. In short, it’s an ideal and ready-made vacation destination for CLUI.

Projected on a back wall of CLUI’s Los Angeles exhibition space was a series of 31 images of the homes on Dauphin Island photographed in November 2005, just two months after Hurricane Katrina. The photographs are strikingly blunt and straightforward and depict, in the words of Poe’s fisherman, ‘a panorama more deplorably desolate [than the] human imagination can conceive’. One of the most memorable images, typical of the series, captures a teal-blue, vinyl-sided home. The house is set on stilts, perhaps ten or more feet high, hovering suspended above the beach. In the foreground a bright red armchair lists to one side, anchored in the sand. Despite the flotsam, it is an image of serene vacancy. Between the supporting pilings a staircase climbs from the home itself to the shore below. This gap between home and ground is a space of anxious anticipation, predicated on the image of the house as a thing of the air not the earth, its weakened substructure somehow immune to the storm surges and increasingly violent weather patterns.

CLUI’s images also reveal the sheer lack of architectural inventiveness and meteorological imagination on the part of the developers of this shifting barrier island. One home appears to be a duplex – a two-storey blue town house mirrored, back to back, by its twin. The style is purely suburban and, set on their high posts, these homes look like middle-class dwellings airlifted from their green yards outside Mobile or Baton Rouge and deposited on Dauphin. Another image pictures two forlorn grey homes on pilings, each with a slight, wayward tilt and otherwise untouched by Katrina’s onslaught. Between them a series of supports still stand, but absent is the home they once held aloft, save for a pile of gnarled wreckage at one end. In this context it is shocking to discover adjacent land plots still on the market for prices in the high six-figures. Dauphin is property speculation pressed beyond the plausible; this is architecture with delusions of permanence.

Emblematic of their pseudo-governmental task-force aesthetic and the resources they provide (informative video displays, booklets and a photographic archive), CLUI’s Dauphin presentation is subtly provocative. Our gaze is briefly averted from New Orleans, as well the other impoverished (now destitute) population centres of the Gulf Coast. Here CLUI addresses the issue of a leisure class that will return and rebuild, while less fortunate communities will sink under the red tape of misadministration. Gentrification will arrive camouflaged under the banner of New Urbanism, as lower-class communities form an overlooked diaspora in other parts of the country. The vacation homes of Dauphin Island will hardly suffer such a fate. As Poe wrote, there is a hallucinatory idiocy in capitalist speculation, particularly with regard to nature. Now, approached by an army of federal regulators and New Urbanist thinkers, the urban Gulf Coast meets its own moment of desperate speculation.