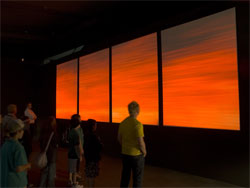 Electronic and digital art tends to assume its avant-garde status often unreflectively. This, and a Modernist insistence on the medium, help to marginalize such practice within contemporary art more broadly. So it’s refreshing to find ‘White Noise’ – an exhibition of projected-image works that push light, colour and sound to the edge of representational recognizability – citing Modernist abstract painting as its inspiration. Picking up on the way painters have used colour fields and geometry to represent energy, speed and movement, and further linking this to early experimental cinema, the result unashamedly appeals to a generation at home in dark spaces with rhythmic colour–light combinations. In the context of a recently opened state-funded arts institution, with enormous pressures to be accessible, curator Mike Stubbs cleverly indulges such viewers with one spectacle after another, while simultaneously confronting us with the anti-humanist limits of pure experience.

Descending the stairs to what trades as ‘the world’s largest screen gallery’, a bold quote by Russian Suprematist painter Kasimir Malevich invites us to ‘swim into the white free abyss’. Infinity is promised, and such transcendental sensations are indeed on the cards (although blue and red are, in fact, its dominant hues). A long dark corridor reveals a series of portals rimmed by Flavinesque neon, which open to nine discrete installations in separate spaces. The whole effect is other-worldly, a mirror-world reminiscent of sci-fi. Indeed, Douglas Trumbull’s Stargate sequence in Stanley Kubrick’s 2001 (1968) wouldn’t have felt out of place in the show, which is more indebted to 1960s’ psychedelia (and painting) than it cares to acknowledge. But there’s little nostalgia in this exhibition of real-time digital abstraction, with its preference for intensities over contemplation. The exhibition designers have even left the passage open-ended, leading into darkness; and this dead-end space becomes another experience in itself.

The most effective works are by Japanese electronic music composer Ryoji Ikeda. In Spectra II (2002) a darkened corridor hosts a series of strobe lights that periodically flash in response to viewers wandering towards a horizon line, imprinting a white rectangle on the retina. An experience of synaesthesia is thrust on us by ultrasonic frequencies and soft floor. Ikeda’s newly commissioned work data.spectra (2005) also features a horizon line, this time running the entire length of a darkened room. It’s a black and white data stream, alternating between a floating sea of rows of tiny digits only visible from close up, and barcode-like blocks of grey. Alarm-like sounds of data churning reverberate through the space.

The cold on-off nature of binary code is in full swing in ‘White Noise’, but not all of the works are digital. Aguas Vivas (2002–5), by Peter Bosch and Simone Simon, comprises two video projections of floating black and white light patterns that initially seem digitally generated. But you peer through a Malevich-like cross, cut out of one wall, to see the crude mechanics at work in a bare adjacent space. The moving abstractions are in fact ‘randomly generated’ by a video camera feed of a neon light reflecting off a bucket of oil, continually shaken by a spring-mounted mechanical action. It’s a highly analogue work, revelling in its scrappy theatricality. But like a few of the other less successful works in the exhibition, the process is more interesting than the ideas or images.

‘White Noise’ prompts an interesting experience of being overwhelmed by your own passivity, and there is little in the way of physical interactivity, with the exception of an accompanying online exhibition of ‘software’ abstraction (selected from a 2003 exhibition in the Künstlerhaus in Vienna, entitled ‘Abstraction Now’). Nevertheless, some of the abstract painters’ rhetoric about dynamic perception is now echoed by interactive artists. Absolute_5 (2005), by Ernest Edmonds and Mark Fell, takes this literally, with wall-height vertical strips of colour that move according to the audience’s presence, forming a sort of ‘colour organ’. However, a sound-track of flicking and hissing perverts the musical inspiration of so many abstract painters.

Ulf Langheinrich has three large works in the exhibition. Waveform (2005) is a four-screen vertical video installation of Rothko-esque dark red waves of colour, whose immersive qualities are underpinned by a forbidding hum. Light (2005) is an eye-fizzling circular projection of spinning, flashing and distorting colours on a suspended disc. Like Langheinrich’s work with Granular Synthesis, this piece both attracts and attacks the eye, giving new meaning to Marcel Duchamp’s ‘retinal flutter’. Langheinrich’s most visually reductive work is saved to last: Drift (2005), another commission, is a large dual projection of flowing black and white horizontal lines generating an industrial-strength Op art ocular haze. There’s an unnerving relentlessness to this menacing flow of lines, which fade to white only to return in bolder terms. Like the number flows in Ikeda’s data.spectra, Drift evokes the dark underbelly of 24/7 global capitalism. Exiting the exhibition spaces, rising up to ground-level, the metal grills on the escalator vibrate with unusual energy.