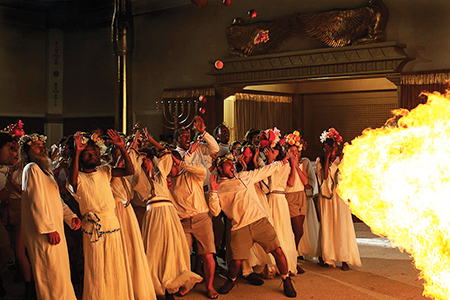 When Yael Bartana finished Inferno (2013), the Temple of Solomon in São Paulo, Brazil, was still under construction. Inaugurated last year, the massive building – built to ‘biblical specifications’, with stones brought over from Jerusalem – is the home of the Neo-Pentecostal Universal Church of the Kingdom of God; it’s a mega-church looming over the city, and can accomodate over 10,000 people. It also provides the back-story for this 22-minute video.

It opens with a procession of people in white garb walking towards the massive building to the sound of a Jewish prayer. On their heads are garlands of flowers and baskets of fruit and they carry offerings. Inside the hall, a high priest leads a ceremony that includes dance and fire, in a tempting mixture of paganism and kitsch. The choreography of their movement and the dramatic lighting that comes from the fires burning in the menorahs bring to mind a Caravaggio painting. And, as befits the Baroque, drama ensues: the temple disintegrates, columns fall, windows shatter, people rush to the doors. The camera lingers on their dirty clothes and stunned expressions as the panicked congregation topple over each other trying to escape. In an exterior shot, the structure collapses, disappearing in a cloud of dust. A Western Wall–like tourist site remains, its plaza crowded with visitors buying souvenir T-shirts and plates emblazoned with menorahs and the outline of the temple.

Bartana calls her method ‘historical pre-enactment’. The YouTube video of the inauguration of the temple in 2014 clearly looks nothing like the artist’s imagined version of it, nor her prophecy of a doomed future. As visually stunning as the video is – the participants are beautiful and the computer-generated imagery is as much Hollywood as it is museum work – it only further communicates that the fable Bartana creates here does not include a lesson. The work is indulgent in a way that overwhelms any real message. Known for her work about Israel, Bartana’s videos deal with nation-building and the societies it produces. For obvious reasons – conflict, religion – her native country has provided the artist with endless source material. She has examined masculinity (Kings of the Hill, 2003, which focuses on men racing their SUVs in the dunes by the beach in Tel Aviv), coexistence (Summer Camp, 2007, in which Israelis rebuild Palestinians’ homes), and the founding of the nation in And Europe Will Be Stunned (2006–11), a provocative trilogy of films about Polish-Jewish relations calling for the Jews to return to Poland.

In True Finn (2014), the other video included in this show (there are also two photographs and a neon work, though none command much notice when displayed alongside the video pieces), Bartana attempts to translate this methodology – digging deep into what makes nations and how – to contexts other than her own. The video brings together eight residents of Finland – including a Canadian immigrant, a Roma woman, a Somali who immigrated as a child and an indigenous Sami – to discuss what makes a ‘true’ Finn. The name of the video is taken from the former name of the nationalist Finns Party, initially known as the True Finns. The eight volunteers spend a week in a remote cabin in order to participate in activities such as drawing a new Finnish flag and writing another national anthem, drama classes in which they re-enact some of their experiences of belonging to or feeling isolated from Finnish society and, of course, many conversations over dinner.

This exhibition – which opened in parallel at Capitain Petzel in Berlin, where the same films were shown – marks a crossroads for Bartana’s work. While True Finn may not be wholly convincing (it gives the impression of an elementary school exercise in accepting the Other), it suggests a new direction for the artist – one that responds to events outside of her personal experience (the rise of the extreme right in Europe) using her signature style to prod at sensitive questions, whilst maintaining a humorous sense of self-awareness and a strong narrative. Inferno, on the other hand, does not match the scale of its ambitions. And Europe Will Be Stunned was incredibly ambitious in scale, but also considered and thought-provoking in a way the silent Inferno could never match. We can only hope Bartana chooses to direct her attention to what has proved to be a significant and memorable project: probing deep into the values and symbols of nations, and their function in society. We need artists like her.

Orit Gat is a writer based in London, UK, and New York, USA.