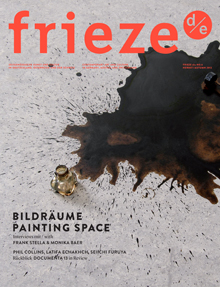 There is a deft and practiced carefulness to Latifa Echakhch’s body of works – a patient precision of touch – that conjures the spectral guest, the attentive immigrant, making her bed before anyone else is up, brewing the tea and generally making herself scarce. And yet in this imagined mise en scène, the domestic or bureaucratic objects that punctuate it are left transformed – subtly or violently or both – by their visitor. The coloured tea glasses are smashed and broken (ever so delicately) against a wall; sugar cubes lie in a messy pile on the floor; the prayer carpets have been carefully unravelled, until only the frames of their previous selves remain. The neoclassical skylight has gone dark, ink flooding its surface. The walls, covered in carbon paper and alcohol, drip blue. And just outside, the flagpoles have lost the flags they should bear: signifiers of nations, states, identity, war, and displacement.

The poetic sensuality of Echakhch’s works often stands in front of their bathetic absurdity – the result of the artist emptying her chosen vessels of their expected utility – yet the farce remains, peering out assiduously at the edges. In this, the Morocco-born, Martigny-based artist’s oeuvre effectively evokes Kafka’s petite and nightmarish bureaucratic allegories. Each artist enacts scenes too improbable, and yet too familiar to be confronted directly: affective approximations of the normative dissonance experienced by the oppressed. So, instead, the furniture is moved a bit, the architecture subtly and irrevocably altered. The convoluted language of UN resolutions and immigration documents is underlined and displaced. Even natural elements, a herd of tumbleweeds, say, turn up where they do not belong, in a museum or on an island off Manhattan.

This last work, Tumbleweeds (2012) – which found its way into Echakhch’s recent solo exhibition at the Columbus Museum of Art in Ohio and her frieze Project on Randall’s Island, both earlier this year – showcased the artist’s sleight-of-hand with objects that lightly push and darkly pull on expected cultural narratives (in this case, the lonely and glorified American West, the colonial stage par excellance for singular glory and nationalist expansion). But other works might be said to be more emblematic of her Conceptualist-tinctured practice. To that end, and closer to home, her body of objects and site-specific installations often set their sights on the migratory and industrial movements between North Africa and France, and the post-colonialist language of uneasy globalization – both visual and linguistic – that results. At the same time, Echakhch’s affecting works employ the formal vocabulary of Minimalism and its attendant art movements, cleverly conjuring its most heroic personages and canonized moments.

See Erratum (2004), which comprises a colour-soaked line of broken Moroccan tea glasses smashed against a wall. If Erratum is a witty and seemingly light-hearted retort to Richard Serra’s inescapable Splash pieces (1968–70) – and the macho, performative and material stance they encapsulate through splashed molten lead – the work is also a dark and cutting sentence on cultural heritage, colonialism, hospitality, femininity and much more. The same may be said of Echakhch’s early series Frames (2001–ongoing): Moroccan carpets are divested of their interior threads, so that only the outlines remain. There is an ineffable reference not only to the ideological ramifications of unravelling Muslim prayer rugs in the year of 9/11 (the wars in Iraq and Afghanistan nascent) but also to the monochrome and the titular frame, geometric abstraction and Minimalist giants like Carl Andre. Echakhch’s series expertly simulates the very modernist framework that con­temporary artists invariably find themselves working in or against, while imbuing this framework with the contemporary post-colonial landscape that Modernism forged.

If the reductionist formal vocabulary in which Echakhch’s works are manifested and which she has employed over the past decade to such great effect gets much notice, this might be because this vocabulary is reassuringly recognizable – one can easily see its foundation in Minimalism and her references to other movements in the high Modernist canon, including Colour-Field painting. Take the gorgeous installation À chaque stencil une révolution (For each stencil a revolution, 2007). The artist papered a room with A4-size carbon paper and flooded the paper with alcohol, which caused the blue pigment to stain and then bleed down the wall, finally pooling on the floor. The work has been shown at the Queensland Art Gallery and at Art Basel, where I experienced it. The grid of deep blue squares bleeding lighter waterfalls of cerulean pigment down the walls, lapping against the floor, was surreally moving. Colour-Field painting’s mores and effects were lucidly evoked, yes, but the political frisson of the installation still felt unrehearsed and incalculable, even before I became aware that the work’s title is a quote from Yasser Arafat, the first president of the Palestinian National Authority, who died in 2004 (and whose remains have recently been exhumed to test claims that he was poisoned).

There is something patently strange about the artist putting her preferred materials – carbon, ink, glass, carpet, sugar – through the dully familiar Modernist paces (the grid, the pile, the wall, the floor), even as her personal politics (as a woman, an immigrant, an artist) course through them. It all seems at once effortlessly innate and studiously unnatural – and this rub is where the works, at first glance too delicate and distilled for words, get their power. Earlier this year, I attended the exhibition that Echakhch did with artist David Maljkovi´c at Kunsthalle Basel. The title of their show, Morgenlied (Morning Song), was gleaned from Goethe’s poem Künstlers Morgenlied (1773, Artist’s Morning Song); in 1868, the architect of the Kunsthalle, Johann Jakob Stehlin Jr., used the poem as source material for his neoclassical design, with its emphasis on light (via a monumental skylight) and the Enlightenment. In typical fashion, Echakhch distilled this confluence of referents and ideological history into an absurdly beautiful and yet noir-ish work. Over the skylight’s 80-square-metre grid of glass, she dripped and splattered (with convincing Ab-Ex muscularity) black Indian ink, which created a spotty veil that occluded light from entering the very gallery it was supposed to illumine. The title the artist gave her site-specific painting was, appropriately enough, the French word Enluminure (Illumination, 2012), which evokes luminescence yet describes the miniature paintings and drawings often found in medieval manuscripts – as if the skylight were a page in a book. But where there was light, there is now shadow.