Walking backwards, eyes right and peering down, I’m scrutinizing a series of small photographic prints displayed in four narrow vitrines. Placed at right angles to each other, the vitrines form a large rectangle, filling most of the gallery but leaving enough space round the edges to view larger, framed prints on the walls. It’s a slightly awkward way to take in this collection of around 400 images, but, with an arrow guiding us along the prints in the vitrines, it seems that this installation is best experienced as a scrolling narrative.

This series of five photographic compositions by the Polish artist Zofia Kulik was created between 1968–71. Titled Instead of Sculpture – also the title of this exhibition – they were originally presented in 1971 as a three-screen slide show for Kulik’s graduation exhibition at the Academy of Fine Art, Warsaw. Never seen in its entirety since, this new iteration – Instead of Sculpture – Post Script (printed in 2016) – presents the slides in rows of contact prints, three images across, arranged in the order of their original time sequence. The framed photographs on the walls are edits of the slide presentation that were printed for the first time in 2014 on the occasion of an exhibition at Żak | Branicka in Berlin.

Richly evocative of a period in time, the sequences seem to show the norms of postwar Communist Poland being carefully and cleverly subverted, the artist arranging her photographs in precise and playful ways. Kulik collected a diverse array of visual material, from street scenes of red flag carrying marchers to documentation of a middle-aged female model in swimming costume and sunglasses striking a series of ‘sculptural’ poses while adorned with paper cones. There are era-revealing clues – the occasional mini-skirt, another female model in a scraggy grey and white fur coat, a male hippy – but it was as sculptural arrangement rather than social history that these carefully pieced together tableaux were originally constructed.

Kulik – who, from 1971–87, worked collaboratively as KwieKulik with the artist Przemysław Kwiek – was influenced by the ‘Open Form’ theories of Oskar Hansen, whom she studied under at the academy. She presents sculpture as a social, temporal form rather than something fixed in time. This approach to the medium is perhaps best expressed in a short piece of text that accompanies sequence four in the vitrines, Study of the Nude: ‘What is film? Space in time. What is sculpture? Space in time. What is the difference? A film is a sculpture, but in a linear form (of frames of film).’ 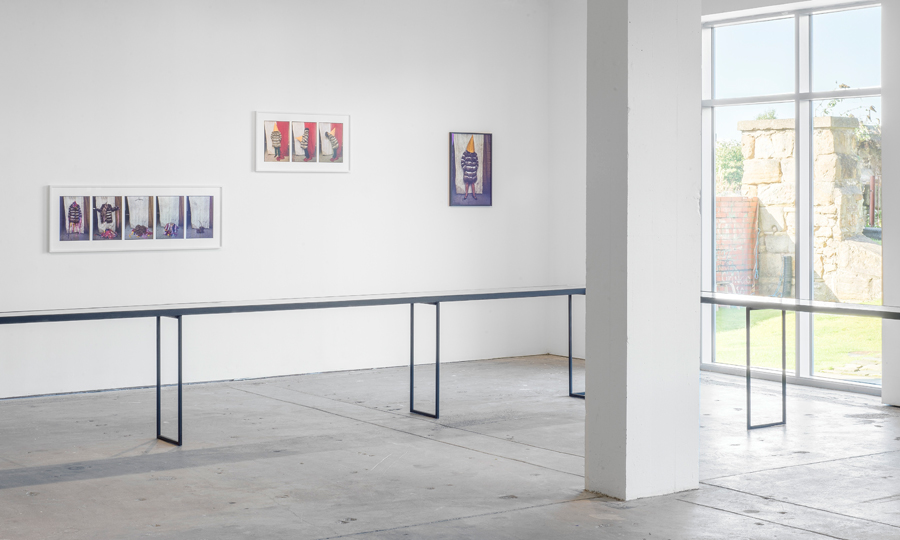 The presentation of this work at Glasgow Sculpture Studios – the space’s final show for the foreseeable future due to a cost-cutting reorganization that has seen the exhibition programme put ‘on hold’ – was clearly influenced by the historic significance of Kulik’s forward-thinking approach. Yet the vibrancy and beguiling strangeness of the work carries its own power: a hazy blood red fills the bottom half of three frames in that aforementioned flag sequence; round dots of yellow card become rows of cones before reappearing in a repeated image of a woman’s bare breasts, covering the left nipple; the model in a fur coat is variously adorned with tubes of yellow card, a red curtain is crumpled over her head, a large yellow cone covers her face.

As I continue to pore over the vitrines, taking in the vivid forms, colours and odd scenarios of these visual narratives, I imagine the hum of the projector and clicks of the slide cases from the work’s first showing over 45 years ago. I sense, too, the subversive rigour of a young artist finding movement, openness and newness amidst the creaking conformity of the Eastern Bloc.