In ‘Tending to the Harvest of Dreams’, Lungiswa Gqunta’s solo exhibition at Frankfurt’s MMK Zollamt, the air is saturated with the sweet, obtrusive smell of burnt imphepho – a mixture of young, dried Helichrysum leaves commonly used for divination in South Africa, the artist's home country. The scent mingles with Gqunta’s voice, which softly chirrups vowels and consonants in IsiXhosa and English from invisible speakers within the space, drowsily narrating a previous night’s dream from the interstices of twilight. Despite this warm and welcoming first impression, however, the taut air is indicative of the exhibition’s guiding impulse, whereby nothing is quite as it seems.

Resting on the floor, and occasionally suspended from the ceiling, long tangles of barbed wire mimic tumbleweed. Titled Noluthando, Nompumelelo, Kholiswa and Phumla (all works 2021), these tangles have been meticulously hand-wrapped in repurposed bedsheets by the artist and her collaborators. Most of the cloth is green, but there are patches of orange and purple, which, from a distance, evoke hundreds of tiny blooms. In contrast to this apparent lushness, the artist’s River beds – a series of rusty steel basins dotted throughout the space – evoke drought and famine. Echoing how a poor Black South African’s view of a manicured garden is so often mediated by a steel gate and a barbed-wire fence, the work speaks to the plight of the country’s Black labourers, who commute long distances to nurture the gardens, farms and vineyards of others by day, only to return to the barren landscapes that apartheid fashioned as ‘townships’ at night. As Gqunta observes in the exhibition booklet: ‘They lavish their care and love on these gardens, even though both are denied them in these landscapes of oppression and exploitation.’

For Black South Africans, the post-apartheid ‘harvest’ has been meagre, with many still waiting to reap what they sowed by resisting apartheid. As it dawns on those raised on the promise of a ‘rainbow nation’ that rainbows are inherently fleeting, a forceful reckoning with the state of the nation is evident. Referencing the transition from apartheid to democracy, poet Koleka Putuma contends in Hello, Bu-Bye, KoKo, Come In (2021) that ‘the feast at democracy’s table was prepared with/in silence’. By framing the exhibition around her dreams – a taboo topic of conversation in Xhosa spiritual culture – Gqunta can be seen as part of a generation of young South Africans who are breaking this ominous silence. If, in the past, it was considered distasteful to criticize South Africa’s hard-won democracy, figures such as Gqunta, Putuma and Sizwe Mpofu-Walsh – whose 2021 book, The New Apartheid, contends that ‘apartheid didn’t die, it was privatized’ – are now determined to tell some uncomfortable truths.

As Gqunta observes in the exhibition booklet, it is in the compartmentalization of spaces that the legacy of apartheid is most obvious. ‘Parks are one of the many places in which you can see this segregation structurally, and it also exists in terms of gardens and natural spaces of leisure,’ she notes. ‘This green grass really becomes a physical manifestation of how people are treated and how an area is treated because of the people who live in it.’ In Frankfurt, Gqunta summons her ancestors via her dreams to reassociate herself with her alienated and alienating inheritance. She reclaims severed connections between herself, the land and that which grows on it, as well as the physical, mental and emotional implications of that process. In her hands, the ugliness of South Africa’s famous landscape is revealed. After all, how beautiful can a garden really be when it’s on stolen land?

Lungiswa Gqunta's 'Tending to the Harvest of Dreams' is on view at ZOLLAMT MMK, Frankfurt, Germany, until 14 November 2021. 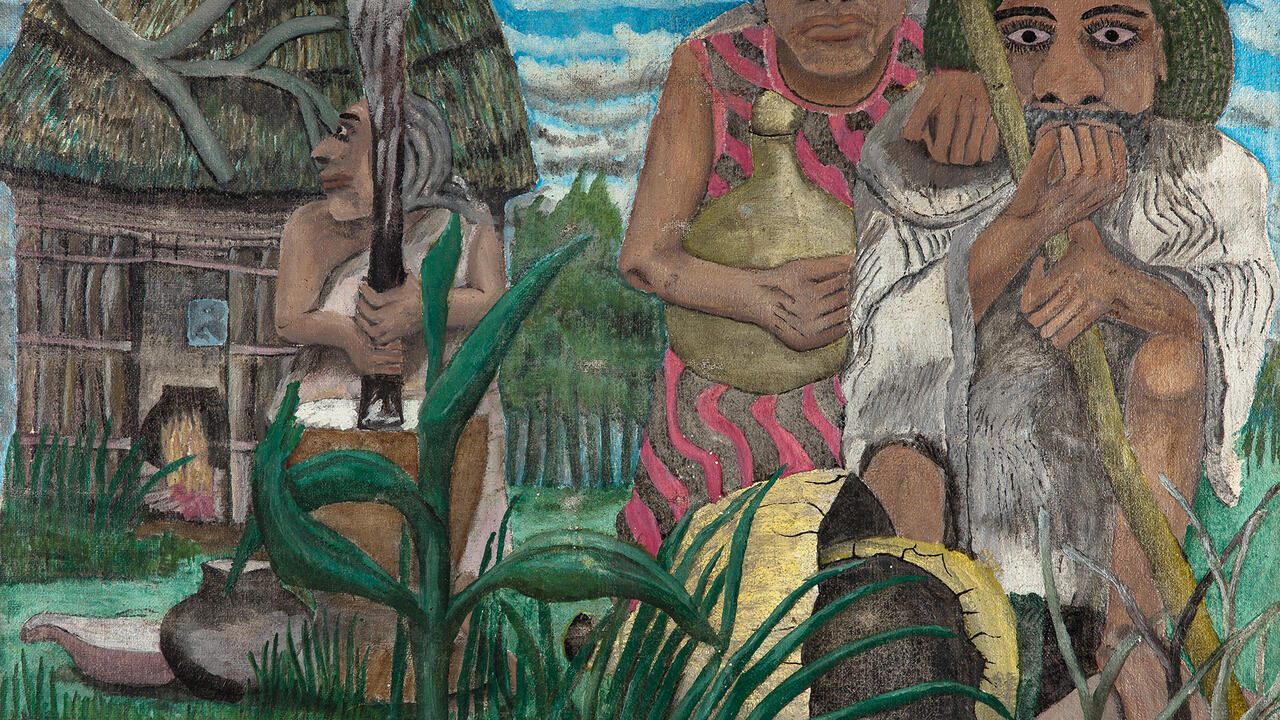 EU Reviews , UK Reviews
The Top Five Shows to See in the UK and Europe