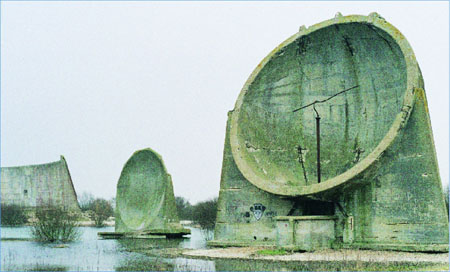 The remnants of the acoustic defence system that once guarded England’s shores epitomise time’s contempt for technology. In the years between the invention of the aeroplane and that of radar, giant listening devices were constructed to capture the sound of approaching enemy aircraft. Initially, the sound locators took the form of huge ear trumpets: hybrids between Heath Robinson ingenuity and Terry Gilliam absurdity. Soon, however, these Edwardian follies mutated into the concrete Modernism of ‘acoustic mirrors’, some of which still stand, half-cocked to the sky, listening out across the Channel.

As the majority of us become increasingly ignorant of the technology in which we are enmeshed (to such a degree that the cinema depicts it as our ultimate destroyer) acoustic mirrors seem steeped in the quaintness of old-tech. Flying in the face of Max Frisch’s dictum that technology is ‘the knack of so arranging the world that we need not experience it’, acoustic mirrors were designed not to replace our senses but to enhance them. These concave behemoths focused sound from up to ten miles away onto the stethoscope-wearing listeners nestled in their dishes.

Now struck deaf by ambient noise, the structures are slowly losing their meaning. Robbed of their function as an early warning system, they are becoming increasingly monolithic, more inscrutable by the day. They are no longer techno­logical devices: they are the moon-faced brothers of the Easter Island heads.