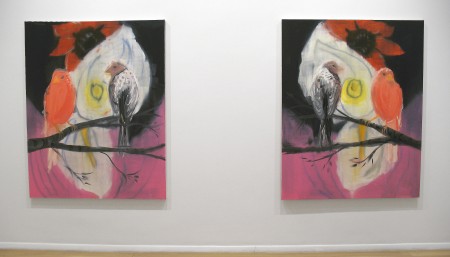 Ann Craven uses conceptual precepts to guide her paintings. Beginning with clichéd, stock subject matter such as birds, deer, moons and flowers, she neutralizes her storybook content through continual variations and repetitions, shifting the conversation about her work into a theoretical frame that considers the body as a whole, rather than its individual parts. For example, in 2002 and 2004 Craven staged two identical exhibitions at the Gasser & Grunert Gallery, New York, which differed only in the size of the works on view; another time she hung simultaneous installations of a series of 400 moons: the originals were shown in New York, while 400 brand new copies were placed on view in Cincinnati.

Such stratagems eliminate any sense of individuality or preciousness within Craven’s work, and the wry, cerebral installations urge viewers to approach the paintings as interchangeable objects. This trajectory continued last summer, when Craven exhibited a group of palette paintings made from off-strokes and paint pools alongside stacks of cardboard boxes in which the 400 moon copies sat, hermetically sealed.

At Knoedler, the esteemed uptown gallery more closely associated with the Frick Collection than, say, the New Museum, Craven’s skill as a painter was celebrated. Working wet on wet, her deft brushstrokes have gained surety with every year, and in the new paintings rigidity and precision have been replaced by looser brushstrokes, washes of colour and a softer, more expressive touch. The installation consisted of two themes (birds and moons), which are subjects that have occupied Craven for over a decade. Six expertly rendered new bird paintings hung in the front gallery. Of particular note were Wasn’t Sorry Calla Lily #1 and #2 (2008), mirror-image paintings in which the birds are seen beginning to dissolve into the background. Also wonderful is Bold as Love (2008), in which a bird sits in front of a vortex of pinks and violets that dominate the canvas and draw the viewer in. Girlish colours for seemingly girlish subjects, the paintings invoke the grande dame Georgia O’Keeffe in palette, subject, form and forcefulness. Arthur Dove, another American Modernist, also comes to mind with his unnerving, powerful and sometimes terrifying natural abstractions. Birds are generic and somewhat pedantic subjects, and Craven has used them ad nauseam as a vehicle to develop her own visual language. Here, as they veer towards abstraction, she seems to be on the brink of something new.

In the main gallery 94 moon paintings progressively wrapped around the room in a horizontal band. The works date from 1995, when Craven began sneaking outdoors to capture the moon in its various guises, and the project has grown compulsively since then (on a good night she will make as many as ten paintings). In them the sky ranges in colour from midnight blue to jet black, creating space for a yellow sliver, a lipstick smudge, a white smear or an amber orb. Around the room the moon dips and rises, waxes and wanes, slides behind clouds and peeks out from trees, a veritable skyscape that marks the passage of time.

Halfway through the installation Craven decided the moons needed to rise up further, and the entire series shifted in register by nearly three feet, from 153 to 234 centimetres above the floor. This was the first time she has rehung midway through a show, and the impact was striking, particularly in this multi-levelled and refined exhibition space. It made the installation feel alive and transitory, much like the moons themselves, which hover between a sketch and a painting. Measuring 36 centimetres square, they felt portable, conveying a sense of immediacy, even haste. Much like John Marin’s five-minute landscapes of the rugged Maine coast, they are complete but not completed.

What, then, to make of these paintings, which hover between conceptual idiom and beautiful object? Installed in groups or series, the sheer volume of works triggers a debate about the conventions of both painting and exhibitions. Yet taken as individual entities, the conceptual framework recedes into the object’s history, and once you move beyond the naive subject matter it is possible to luxuriate in her deft sense of colour and assured touch. That this is so readily possible is a constant surprise, for logic suggests that this type of straightforward, representational painting would short-circuit rather than open out. However, by reworking, re-presenting and returning to the same stock subject matter, Craven is building a corpus that engages the most pressing issues of today’s art world, including questions of consumption, collection, authenticity, value and skill. It is a curiously compelling project, and this latest manifestation suggests that there is still far to go.