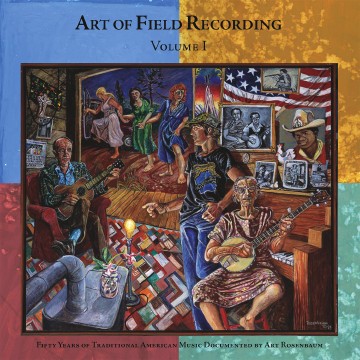 Made over the last half a century, Art of Field Recording, the life’s work of Art Rosenbaum, a genial professor at the University of Georgia, brings together hundreds of recordings of virtually unknown American folk music. Issued as a three-part series of box sets and accompanied by drawings and paintings of many performers, weighty texts and contributions from Rosenbaum’s family, the monumental release is a testament to how the practice of recording in the field can preserve oral narrative traditions. Apart from the mid-1950s’ releases of John and Alan Lomax’s two collections of early commercial reissues and Harry Smith’s Anthology of American Folk Music (1952) (which was an influence on the young Bob Dylan, who stole the six-LP set from a friend), there has been little that rivals the scale of Rosenbaum’s project.

The first volume of Art of Field Recording runs across four discs, whose categories – Survey, Religious, Blues, Instrumental & Dance – nod to those of Smith’s Anthology (although the latter was less wide-ranging, recorded exclusively in the South during the late 1920s and early ’30s). Neither of the collections, which should be considered equals, makes claims to academic methodology or comprehensiveness: their forms are dictated only by the compilers’ good judgement and the limitations of portable recording equipment. Although the 1930s saw the introduction of wide aluminium discs (as used by the Lomaxes), early collectors, such as the Englishman Cecil Sharp, had to make do with just pencil and paper to notate songs. It was not until magnetic tape came into general use during the 1950s that recordings could tip the three-minute mark.

Starkly different from studio sessions, these recordings are of musicians playing music passed down by railroad workers, preachers and pioneers in the environment in which the songs were written – homes, churches, front porches and at festivals. Only one-fifth of the recordings have been previously issued, and the anthology includes many forms (prison songs, sea shanties and unaccompanied ballads) that were ignored by mid-century record labels because they were deemed to have insufficient commercial appeal.

Gathering his examples ‘shotgun-style’ by arriving in a community and asking around for old-time fiddlers and banjo pickers, Rosenbaum recorded non-professionals playing outside the commercial context, performing songs that have been learnt from the family or the community. (Frank Walker, a pioneering A&R man from the 1920s, categorized his own findings as ‘heart songs’ and ‘event songs’.) Rosenbaum’s close relationship with the performers is clear: many of them explain when and how they learnt the song. (‘Me daddy learnt me how to play the organ, way-ay back in tens – he was an awful good singer.’) While some of the songs are centuries old, the weirdly out-of-time renditions from such a vast cast of performers focus the collection on individuals. Some songs, such as the seven-year-old Ray Rhodes’ tale of a hanging in Missouri and Margaret Kimmet’s unabashed bar-room ditties (with the clicking of pool balls audible in the background), I’ve wanted to play over and over. Others, such as the Sacred Harp Singing Group’s raucous antiphonals, a righteous hymn of demons and angels, put the fear of God in me. And I’m not religious.