Katrina Brown Despite being the year of a Tate Triennial in London and of biennials in Venice, Istanbul and Lyon, scale did not result in much of lasting substance in 2009. With hindsight, there was a boldness about Nicolas Bourriaud’s Tate Triennial, ‘Altermodern’, that I liked, both in terms of its intellectual ambition and its staging, and some really enjoyable moments in Daniel Birnbaum’s ‘Fare Mondi Making Worlds’ in Venice (especially the fantastic room that brought together an unlikely combination of Sherrie Levine, Lygia Pape, Philippe Parreno and Wolfgang Tillmans). But the group shows that have stayed with me have been more modest proposals, such as ‘The New Monumentality’ at the Henry Moore Institute in Leeds, with Gerard Byrne, Dominique Gonzalez-Foerster and Dorit Margreiter: an askance but thoughtful look at some good work and interesting ideas.

Lauri Firstenberg Mark Bradford’s colossal Ark, sited in the Lower 9th Ward for Prospect.1 New Orleans – produced in collaboration with L9 Art Center – was a rare model of rigorous contextual responsiveness and collaboration, elegantly attending to a charged historical and political locale and moment, while producing a potent, experimental monument. A survey of Bradford’s work, from 1997 to the present, entitled ‘You’re Nobody (Til Somebody Kills You)’ will open at the Wexner Center, Columbus, in May 2010.

Susanne Gaensheimer ‘The Pictures Generation’ at the Metropolitan Museum of Art, New York, was a groundbreaking exhibition containing works from a moment in art history that has been recognized only in recent years as one of the most significant after Minimalism and Conceptualism. The exhibition presented this period and its broad array of influential practices in a precise yet animated way, inviting people to engage with rarely seen works by John Baldessari, Barbara Bloom, Jack Goldstein, Sherrie Levine, Richard Prince and Michael Smith, amongst others. In October, pressing ahead with its highly innovative programme, Witte de With, Rotterdam, launched a one-year exhibition project examining questions surrounding contemporary moral and ethical conditions and dilemmas. The first stage of the ‘Morality’ project includes a diverse range of artistic positions, a website and a blog, as well as concentrated fringe events and educational programmes. Interestingly, adopting such a structure for the exhibition means that a lot of its critical content will be conveyed in retrospect rather than on immediate viewing.

Margot Heller Underpinned by a broad but convincing premise, ‘The Russian Linesman’, curated by Mark Wallinger for London’s Hayward Gallery, brought together an idiosyncratic and fascinating selection of historical and contemporary works. Francesco Manacorda’s ‘Radical Nature’ at the Barbican, London, was timely, hugely enjoyable and a particularly successful use of the gallery’s challenging spaces. For all its imperfections, the 53rd Venice Biennale, ‘Fare Mondi Making Worlds’ was punctuated by some remarkable works. Overall the Biennale provoked a wide spectrum of emotional responses, from profound unease at Teresa Margolles’ ‘What Else Could We Talk About?’, in the Mexican Pavilion, through to sheer pleasure at Pae White’s bird-seed encrusted chandeliers, Weaving, Unsung (2009), an installation enlivened by Venice’s most accomplished bird songsters.

Caoimhín Mac Giolla Léith Venice was the only biennial I saw and savoured last year, which leaves me little else with which to compare it. That said, I’m also increasingly disinclined to credit dramatic contrasts in critical reception between successive realizations of this sprawling event, given the inherent structural limitations with which every director has to contend. Though not technically a ‘show’, Udo Kittelmann’s opening salvo as Director of the National Gallery in Berlin, which included a spectacular orchestration of Thomas Demand’s ‘German’ works at the Neue Nationalgalerie and a reworking of the city’s various collections at the Hamburger Bahnhof, augur well (apart from the queasy populism of the latter show’s title, ‘Die Kunst ist Super!’).

Elizabeth Ann Macgregor The major survey of 2009 in Australia was the ambitious three-part ‘China Project’ at the Gallery of Modern Art, Brisbane. Its sections comprised: ‘Three Decades: The Contemporary Chinese Collection’, which profiled the strength of the gallery’s collecting in recent years and included around 140 works by 50 contemporary Chinese artists; ‘Zhang Xiaogang: Shadows in the Soul’, which surveyed 30 years of painting by one of China’s most celebrated artists; and a specially commissioned work, Life Lines (2009), from the Australian–Chinese photographer and performer, William Yang. Together, these unique perspectives demonstrated the creative range of Chinese contemporary art practice today.

Bob Nickas ‘In & Out of Amsterdam: Travels in Conceptual Art, 1960–76’ at the Museum of Modern Art, New York, organized by Christophe Cherix, included seminal works by, among others, Bas Jan Ader, Hanne Darboven, Gilbert & George, Sol LeWitt, Charlotte Posenenske and Allen Ruppersberg; it was accompanied by a fantastic catalogue. Paul Chan, Tony Conrad (and his astounding solo violin performance), Guyton\Walker, Rachel Harrison, Aleksandra Mir, Lygia Pape and Wolfgang Tillmans, as well as Bruce Nauman’s off-site exhibitions, were highlights at a Venice Biennale that could have benefited from a few more.

Solveig Øvstebø The group exhibition ‘27 Senses’, curated by Lina Dzuverovic at Kunstmuseet Kube in the small town of Ålesund on the west coast of Norway, was an interesting approach to historical material and engagement with a particular place. Using the life and work of Kurt Schwitters and his exile in Norway in the 1930s as a point of departure, artists such as Kenneth Goldsmith, Carl Michael von Hausswolff, Karl Holmqvist, Jutta Koether, Eline McGeorge and Selmer Nilsen presented works in various forms – homage, commentary and performance – providing a multi-dimensional take on Schwitters’ life and art.

Adriano Pedrosa In Brazil, Porto Alegre’s Bienal do Mercosul, with its artist-curated shows and, in Turkey, the 11th Istanbul Biennial, with its severe political approach, might have been more experimental and radical, but in 2009 it was good old Venice that delivered a well-articulated and installed exhibition – despite the murky waters full of pavilions and collateral events that surrounded Daniel Birnbaum’s ‘Fare Mondi Making Worlds’.

'The Death of the Audience' at Secession, Vienna, intersected works of the past, present and future like a temporal origami. - Alessandro Rabottini

Alessandro Rabottini Organized by a number of artists and curators, including John Armleder, Laurent le Bon, Mathieu Copeland, Gustav Metzger, Mai-Thu Perret, Clive Phillpot and Philippe Pirotte, ‘Voids: A Retrospective’ at the Centre Pompidou, Paris, (which travelled to the Centre Pompidou–Metz and Kunsthalle Bern) traced the exciting history of the vacant exhibition space in contemporary art, from Yves Klein to Maria Eichhorn. The catalogue is a must-have. ‘The Death of the Audience’ at Secession, Vienna, curated by Pierre Bal-Blanc, revisited a series of radical, marginalized experiences from the 1970s designating intersections between works of the past, present and future like a temporal origami. Successfully bringing together design, ideology, ambition and failure, ‘Cold War Modern: Design 1945–70’ at the Victoria & Albert Museum, London, was a feast for the eyes as well as providing food for thought.

James Rondeau In New York, a remarkable group exhibition – ambitious and chaotic in equal measure – ‘Beyond the Canon: Small Scale Abstraction 1945–1965’ at Robert Miller Gallery contained over 90 works by more than 60 artists. This pointedly expansive assembly was a joy to sift through. Designed to modify entrenched rhetoric surrounding mid-century abstraction, the show contained revelatory works by Norman Lewis, Alfonso Ossorio, Charlotte Park, Alma Thomas and many others. I admired and learned from the engrossing ‘The Pictures Generation’ at New York’s Metropolitan Museum of Art. The exhibition revised the art-historical record, adding a significant amount of complexity to a generational narrative still in formation. By far the best group exhibition I experienced this year, however, was performance-based. In Basel, the spectacular restaging of Il Tempo del Postino (co-curated by Hans Ulrich Obrist and Philippe Parreno), following its presentation at the Manchester International Festival in 2007, was a revelation. Doug Aitken, Matthew Barney, Pierre Huyghe, Anri Sala and others staged stirring vignettes that testified to the creative intelligence required to bridge the visual and the performative.

Alexis Vaillant ‘The Dark Monarch: Magic and Modernity in British Art’ at Tate St Ives, Cornwall, was one of the most inspiring esoteric-fetishistic and political group shows of 2009. The show explored notions such as magic, folklore, mysticism, mythology and the occult in historical British Surrealist art as well as in numerous contemporary works. Surprisingly, the older works revealed the boundless and unknowable mystery of a mutable, magical world, and the exhibition could be read as a counterpoint to the liberal understanding of modernity’s transparency and progress. In that sense, ‘The Dark Monarch’ demonstrated how we can be re-activated and refreshed by excavated objects. Given the embarrassing and boring ragbag of art at biennials in 2009, the so-called biennial ‘Hello Goodbye Thank You, Again’ at castillo/corrales in Paris was stimulating. The show had no press release, no budget and no sponsor. For the second year running, curator Anthony Huberman phoned in his list of names from St. Louis, and the gallery found the works. This kind of ‘my favourite things from the last two years’-type of show concedes that if one does something as pretentious as a biennial, moreover always with the same curator (even more pretentious!), then the least you can do is do it in August, when everybody is away. In the show ‘Death of Samantha / Season of Glass’ at New Jerseyy in Basel, several king-size reproductions of artist and designer Tony Duquette’s extravagant interiors and decors were installed next to several erotico-Minimalist art pieces by Isa Genzken, Wade Guyton, Heimo Zobernig and others. The result was astonishing. Elisabeth Arden, whose Irish castle was decorated by Duquette, certainly would have been thrilled by this environment (contemporary art works, floor-to-ceiling views of Duquette’s interiors, post-Pollock painted floor) driven by the possibility of a frivolous DIY historicism.

Carol Yinghua Lu ‘Report to the Motherland – 60 Years of Art in the New China’ at The National Art Museum of China, Beijing, provided a comprehensive survey of developments in art since the founding of the Republic of China in 1949. It was the first time a show had been organized around the country’s official 60-year-old art history; it included ink, watercolour and oil paintings, engraving, sculpture, folk arts, comics and propaganda posters that showcased ‘the process of nationalization, popularization and modernization of art’. Although many of the 700 works of art included in this informative show were not modern or contemporary, they lent a rare opportunity to gain greater understanding of the origins of contemporary Chinese art. 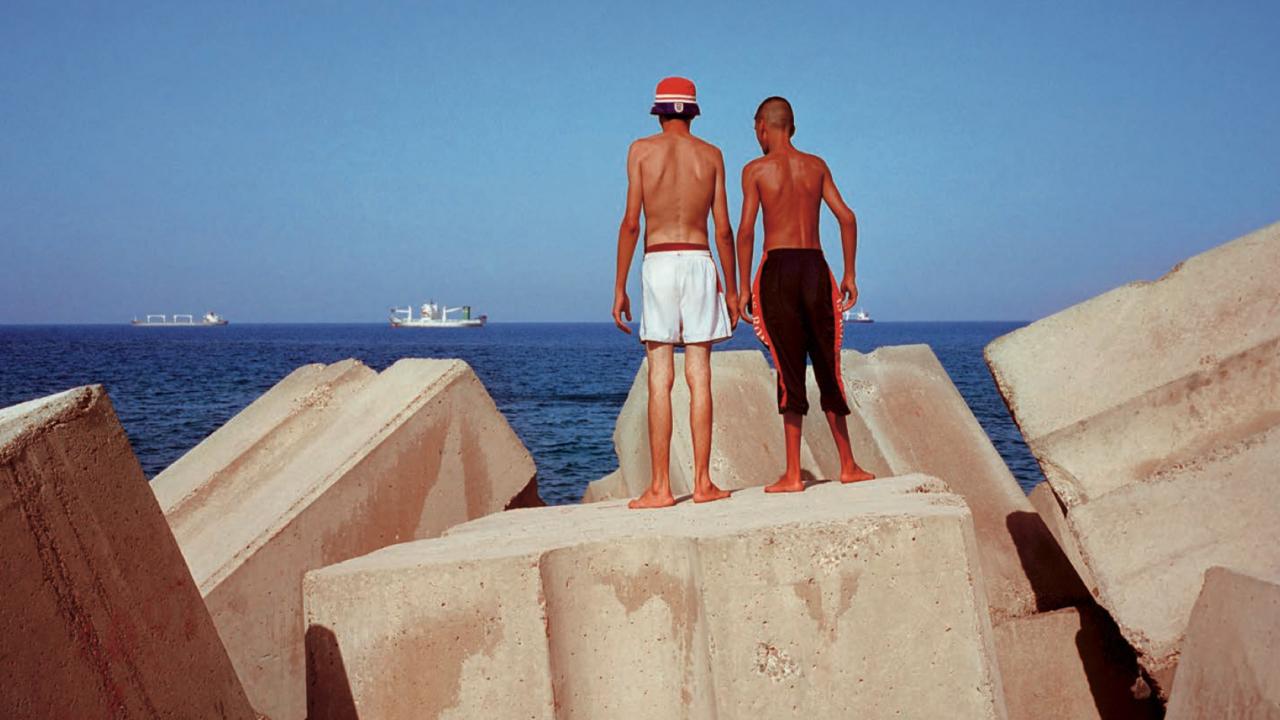