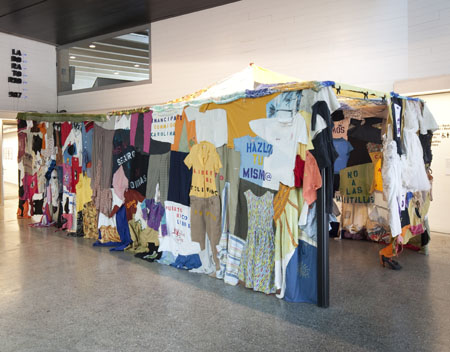 The mysterious linguistic entity ‘CGEM’ (pronounced ‘See-gem’), which was invented by Colombian curator María Inés Rodríguez some time before she curated ‘CGEM: Notes About Emancipation’, apparently designates a semi-secret society and each initial refers to a specific word in Spanish. However, unlike an acronym, the words matter less than what the term is meant to stand for in any language whatsoever – a temporary working community of socially emancipated subjects. For Rodríguez, ‘CGEM’ fluctuates between a noun and an adjective, a thing and its description – I can be part of a ‘CGEM’, or I can be described as being ‘CGEM’, and so can you.

‘CGEM: Notes About Emancipation’ was held in the Museo de Arte Contemporáneo’s ground-floor project space, Laboratorio 987, on the occasion of the museum’s fifth-anniversary exhibition and activities programme devoted to Latin America. The all-female participants – Isabel Carvalho, Carolina Caycedo, Carla Fernández, Adriana Lara and Judi Werthein – share a common interest in collective creative processes, questions of social and cultural identity, economy and exchange, and the development of constituencies beyond the usual confines of the art world.

The exhibition was accessed through Caycedo’s rectangular tunnel/tent, Caminemos Junt@s (Let’s Walk Together, 2010). Basing her approach in ancient Latin American traditions of collective work and co-operation, Caycedo organized her project in several phases with local groups of men and women, including a Roma community, who consider themselves emancipated. Together, they stitched a ‘collective ownership tent’ from hundreds of colourful donated garments onto which messages of emancipation and resistance were sewn. At the opening reception, the presence of this structure and its creators lent a ceremonial, celebratory aspect to the exhibition entrance, while the individual articles of flattened clothing rather poignantly called to mind the self-fashioning of individual bodies and subjectivities, but also fragility and even absence.

An alternative economy was highlighted in the main space, which was dominated by fashion designer Fernández’s Papeles de trabajo Colección Primavera Verano 2011 (Work Papers Spring/Summer Collection 2011), displayed in a sprawling white geometric pop-up store designed by artist Pedro Reyes (Pop-Up Store, 2011). Fernández founded Taller Flora, a mobile fashion laboratory that works on a fair-trade basis with indigenous communities in Mexico to link contemporary and traditional textile design, techniques and practices. All of the clothing here was available for sale.

While Caycedo’s colourful nylon demonstration banners blared their hand-stitched slogans (‘Don’t Pay Taxes’; ‘Crisis is a Means to Govern’; ‘Trust Each Other’) from a nearby wall, a tiny green man in profile, one of the vinyl signs used to indicate exits throughout the museum, ran in the wrong direction on a lower corner of the pop-up store. This figure was part of Judi Werthein’s discreet intervention, Salsipuedes / Exitifyoucan (2010), for which she playfully kidnapped and diverted these exit figures, organizing them into groups in some places, thus sowing confusion but also granting them and the building’s users a different form of agency.

So far, so coherent. Adriana Lara’s contributions, though, including a video made up of scenes from the Venice Carnival, over which single numbers appear (from the series ‘Números [Ambiguación]’ and ‘Números [Desambiguación]’, 2010), and various works on paper or digital prints displaying numbers, lost me. That said, her untitled opening-night-only performance – a lecture about the exhibition delivered in a spontaneously made-up language by a male lecturer – indicated that easy comprehension was not her aim. Perhaps we were being emancipated from the idea that we needed to understand?

Instead of an art work for the exhibition, Isabel Carvalho produced a sheet music-sized notebook dedicated to the late curator Virginia Peréz Ratton (Cuaderno de Apuntes sobre la emancipación 1. Encantadoras de serpientes, Notes about Emancipation 1: A Notebook. Snake Charmers, 2010). The book is filled with mainly blank pages for note-taking, but Carvalho invited other artists – including, amongst others, Julieta Aranda, Rosa Barba and Carla Zaccagnini – to contribute music, songs or lyrics to it. Aranda’s Cantata for a General Equilibrium Model (or CGEM) consists of photographs of a wonky musical score she created out of string, wire, cassette tape, balloons and paper balls wound throughout her apartment, which she then photographed. Caycedo and Chevali Sifre Vulcanica wrote a hilarious, bawdy song, ‘Emancipation Rules the Nation’, which includes musings on Claire Bishop, Nicolas Bourriaud and Thomas Hirschhorn, and proposes to rethink relational art in terms of ‘hormonal fluids and secretions’.

‘CGEM: Notes About Emancipation’ came across as something of a tentative manifesto. This is a contradiction in terms, I know. At the very least, the show materialized the spirit of ‘CGEM’. That its first apparition emerged in the form of notes – jotted down as art and design, texts and music – instead of in any definitive statements, allows us to gain a better idea of this neologism’s potential.