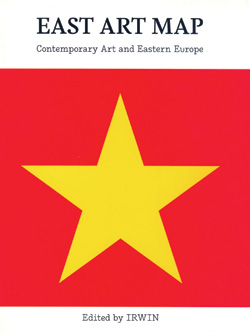 The East Art Map is the second edition of an extensive research/archiving project by Slovenian artist-group IRWIN (Dusan Mandic, Miran Mohar, Andrej Savski, Roman Uranjek and Borut Vogelnik) based in Ljubljana. It is also one of the first publications from the new imprint ‘Afterall Books’ that has evolved out of the journal Afterall, and is co-edited by Charles Esche and Mark Lewis. Distributed by MIT Press and contributed to by Roger Conover, MIT’s Executive Editor, it should in some way be considered a companion publication to MIT’s anthology Primary Documents: a Source Book for Eastern and Central European Art Since the 1950s (2002) in which Conover is credited as an expert consultant. This could well explain the swelling of the East Art Map from its first inception in 2001 as a quixotic artist’s publication (and website project from 2004) to a 527-page ‘scholarly’ indexed imprint. The tone of the two publications is, however, divergent: East Art Map is marked by the predominance of writing by working curators and Primary Documents by that of art historians. While there are some crossovers between the two there is definitely enough material specific to East Art Map to recommend it.

One of its strengths is the inclusion of art-historical chronologies (1900–2006) from 18 former communist states and potted biographies of seven to ten of the leading artists from each country. This information can be cross-referenced visually with a 126-page section containing 243 reproductions handsomely reproduced on a different paper stock. For the reader wanting to bone-up on art from what is a massive and manifold geo-political region, it is an invaluable resource. However, a number of the artist biographies haven’t been updated since the 2001 edition; the anachronisms are glaring for artists such as Adrian Paci, Anri Sala (both Albanian) and Deimantas Narkevicius (Lithuanian), who have been making major work and showing internationally since then. Neither Pawel Althamer (though there is an essay on him by Esche) nor Artur Zmiejewski are mentioned in the list of key Polish names, and there is no reference to Mircea Cantor in the Romanian list.

Two countries, Belarus and the Ukraine, remain unmentioned, and in Primary Documents Belarus, Ukraine and Lithuania are absent. This is a shame considering that Kasimir Malevich was Ukrainian and Vitebsk in Belarus is the site of an influential art academy, the reputation and influence of which was established by Belarusian artist Marc Chagall. Although IRWIN acknowledge the Ukraine’s omission in the footnotes to their introductory text, along with the ‘sentimental’ bias represented by multiple entries from the former ‘Yugoslavian’ states, to my mind, given the involvement of academic publishing houses and professional editors, these asides should be writ large.
Therein lays the rub of the book; it is an artists’ project wrapped in an authoritative jacket. As long as the reader keeps this in mind, the East Art Map is an invaluable addition to the slowly forming canon of Eastern European art history being published internationally.