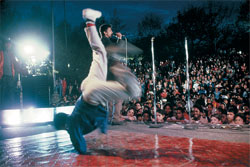 In New York nostalgia and real estate tend to share the same language. From the empty chunk of sky where the Twin Towers used to be to the Starbucks that used to be a beloved dive bar the changing landscape of the city provides an easily understood shorthand, an objective correlative for the lost past. So when curator Dan Cameron titled his survey ‘East Village USA’, it was clear that a simple geographic designation was what he had in mind. The New Museum’s East Village was the one that began around 1981 and was definitively ‘over’ by 1987, the year of the stock market crash. More a time than a place – yet not simply a period – it constituted all the localized, accidental interactions that fix the time in collective memory. In other words, the ‘scene’.
But what exactly is a ‘scene’? What sort of unit of measurement is it (smaller than a Zeitgeist; bigger than a movement; more concrete than a tendency; more diffuse than a style)? Is it a term that productively belongs to art history? And how does one translate the various social and fiscal interactions that define a scene into the display of objects? At the museum these questions were finessed – if not exactly answered – by making an exhibition that tried to be simultaneously celebratory and taxonomic, attempting both to evoke the messy plurality of art production of the period and to make sense of it in the light of the way things have panned out since, reclaiming it for a more sober history.
One important thing Cameron understood: for all the styles born and developed in the 1980s East Village, the real innovations happened less on canvases than in the spaces that displayed them. To the extent that the ‘moment’ is part of art history, it belongs most specifically to a history of the market. The real-world background that allowed the artistic foment to happen is easily summarized: the recessions of the 1970s left the area underpopulated, with cheap storefront spaces available for next to nothing; first-time gallerists with no qualifications other than enthusiasm and the ability to host a good party moved in; the boom of the Reagan years created a micro-class of the newly moneyed, who kept those little storefronts in business for several busy years.
By organizing most of the works displayed into a loose chronology of significant galleries, ‘East Village USA’ told the story of the real actors of the scene: the dealers. The narrative was a progression from the urban to the urbane, from funky glam to cool deadpan. Walking from room to room, you were led from Patti Astor’s FUN Gallery, which brought the graffiti kids down from the South Bronx and started the party, to Gracie Mansion’s ‘anything goes’ cartoon aesthetic, to the more decorous and decorative artists exhibited by Pat Hearn and finally to the commodity-critique bluster of the Neo-Geo campaign headquartered at Meyer Vaisman’s International with Monument.
Arrangement by stable gave each work a context, but a severely limited one. (It was a bit like attending your 20th anniversary high school reunion and discovering all the old cliques still in force.) A few Jean-Michel Basquiat paintings hung with ‘real’ graffiti works; Jeff Koons’ bronze life raft shared space with Richard Prince’s hotrods and a Haim Steinbach shelf. But the possibility of dialogue between Steinbach, say, and Futura 2000 was muted. In the words of the curatorial statement the later work was simply ‘the logical antidote to an excess of glitter and gore’. Only a few oddballs – the slick, kinky photographs of Jimmy de Sana and Ellen Berkenblit’s strange little smeary paintings, for example – seem to float free of this categorizing impulse, speaking only their private languages.
Less concerned with ideological battles, the Performance works documented on video fared better. Karen Finley’s sloppy Southern Gothic psychodrama, John Kelly’s neo-Weimar theatrics, playwright John Jesurun’s noir serial Chang in a Void Moon (1982–3) and a video of Euro-disco countertenor-from-space Klaus Nomi suggested a range of possibilities next to which the paintings and objects seemed inert. The Performance works also possessed a refreshing neighbourhood particularity. (While assorted Expressionists and Appropriationists could, and did, find homes for their aesthetics elsewhere, it’s hard to imagine someone like Nomi attracting an audience anywhere other than east of Astor Place in the 1980s.) Despite the headphones and high-tech cones of solitude set up in the museum’s ‘media lounge’, the audio leaked, bled and mingled. As you walked through the gallery space, Sonic Youth’s feedback squall mixed with Ethyl Eichelberger’s droning accordion and the old school Hip-hop soundtrack of Charlie Ahearn’s Wild Style (1981). If, just for a moment, you ignored the art on the walls and closed your eyes, you could, in the rush of sound, forget the last 20 years had happened, forget that the New York art world had re-professionalized and moved to Chelsea. It was almost like you were there, then.