Visiting an Ed Ruscha retrospective is like going on a pilgrimage: the journey is an integral part of the experience. Before I hopped on the Intercity Express to Wolfsburg I was thinking about the cover of the catalogue: a dynamic diagonal of three capital letters airbrushed in red, 'ICE', against an indigo night sky sparkling with stars. The painting Ice (1993) was made three years after Vanilla Ice had hissed his silly but great chorus 'Ice Ice Baby' which was also about when the streamlined ICE trains were introduced in Germany. Simple, elegant words become vehicles that rush by, and in the rush typography and topography merge: through public display of brand names and slogans words don't just remain words, they become horizontal objects, serial architectures and landscapes structuring the modern environment. Nowhere has this been more obvious than in Los Angeles, and Ruscha was the first artist fully to reflect this.

In his 1962 painting Ace it is as if the three blue letters A, C and E, in a Times italic font, had rushed in like a truck from the right-hand side, the thick oil brushwork swirling directly around the letters like waves. You can almost hear the brakes squealing. This was Ruscha's punchy farewell to the remnants of Abstract Expressionism, as he cheerfully welcomed in the smooth style of commercial illustration. In Standard Station, Amarillo, Texas (1963) some of the lines of the roof and façade of a petrol station extend beyond the building's edges towards the vanishing point in the lower right corner, as if the architect had forgotten to erase them from the display drawing. A sense of haste is evoked and glorified with yellow 20th-Century Fox light beams piercing the black monochrome sky behind the fire-red 'Standard' sign. The irony of the painting's title is that the depicted modular architecture from Amarillo could equally well be located anywhere else the company chose to operate. Ruscha's first artist's book, Twenty-six Gasoline Stations (1963), is an ode to this: the title reads like it means 'Twenty-six Wonders of the World', but the pages confront you with documentary-style black-and-white photographs of petrol stations, each taken from across the street. Every Building on the Sunset Strip (1966) is a 27-foot accordion-fold strip of photographs that give you exactly what the title promises, with one part of each building at the top of the page and the other upside down at the bottom, as if the middle is the asphalt along which your eyes are driving. The Twenty-six Gasoline Stations - all located along Route 66, which connects Ruscha's home town, Oklahoma City, with LA's Sunset Strip - are like notches marking the progress of his teenage urge in the 1950s to escape the provincial world for southern California's promises of space, mobility and sun. This subtle correlation of serialization and emotional investment is embodied in the medium of the book, a reproducible yet sensual object to be touched and personalized through use. Ruscha points to this quality of books precisely by wryly suppressing other functions we expect them to have such as offering extensive information, or great narration, or glossy images. It would have been worth the effort to make reprints of Ruscha's artist's books, allowing visitors to leaf through them rather than displaying original copies in showcases. Ironically, this very tendency of the museum to preserve the serial as singular while putting desire under glass was evident in the display of Ruscha's famous painting The Los Angeles County Museum on Fire (1965-8). The building is set against a surreal, venomously yellow background; devoid of people and surroundings, it looks like an architectural model. At the back left wild flames and smoke are rising, but it appears as if the proud new museum is trying to keep a straight face. It seems to be saying 'Don't worry, just a minor problem; everything is under control.'

In Romanticism buildings and nature were understood as mirrors of the psyche, but what if the psyche enters the hall of mirrors of mass media? In Ruscha's paintings from the 1970s and 1980s words are written over panoramic views like film credits or advertising slogans. In Sea of Desire (1983) the words of the title descend like a flight of stairs from a dark blue stratosphere into a cream-coloured thicket of clouds, as if they were the drunken afterthought of a B-grade screenwriter. In Boy Meets Girl (1987) the title is superimposed in happy white handwriting over a nocturnal LA grid of glistening car headlights and streetlamps, like Hollywood stars caught in a net of pearls.

Since the 1980s Ruscha's sloganeering scenes have been conveyed by taciturn blackness: the bandwagons of The Uncertain Trail (1986) are like a funeral procession sucked up by a dark sandstorm, and a white stripe in the upper left corner of the painting indicates the place where a cynical comment may have been muted. At the Kunstverein Wolfsburg a simultaneous exhibition paired Ruscha's late 1990s 'Metro Plots' - maps of abstracted street grids sprayed with grey acrylic paint like a layer of acid rain - with works by Silke Otto-Knapp. Ruscha is tough competition for anyone, especially a young German painter based in London, but Otto-Knapp manages to carve out her own distinctive viewpoint on LA's ocean of light. She uses watercolour, which bleeds into the canvas with the controlled swerves and taps of a dancer. The work recalls Helen Frankenthaler more than Ruscha's own early 1970s 'stains', where he applied words with cherry juice or egg yolk onto moiré fabric. Große Aussicht (Griffith Park 4) (Expansive View, 2001) is a cheerful choreography of yellow, red, orange and pink dots: traffic lights and hoardings blinking in the sun turn into jewels sprinkled on to a sea of cream. In Elyria Drive (Mount Washington) (2001) a few bold strokes delineate houses, trees and telegraph poles on a hill whipped by wind and rain, turning a potentially terrifying storm into an uplifting moment of rapture. Seen through Otto-Knapp's eyes, LA's grid layout has been overgrown by the energy rush it produces, blurring its rigid structure into a flexible mesh. At a point when Ruscha's own oeuvre seems to trace a line from the 1950s high of Modernity to the hangover of the Millennium, Otto-Knapp's canvases send the pilgrim home with an antidote for depression. 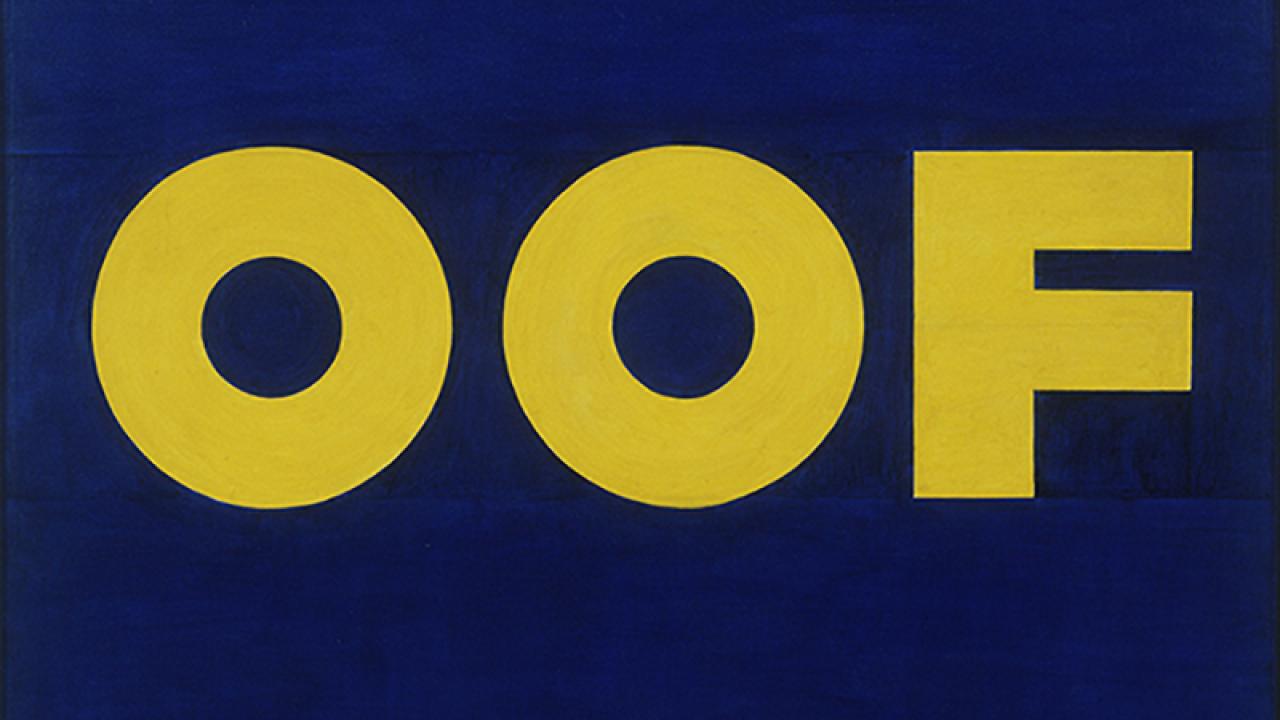 Q: What do you like the look of? A: A clear bright sky in the morning