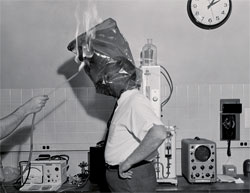 ‘That was the evidence itself,’ notes Edgar Allan Poe’s detective Dupin in The Murders in the Rue Morgue (1841), ‘but it was not the peculiarity of the evidence. You have observed nothing distinctive. Yet there was something to be observed.’ The evidence will point eventually to the involvement, in the grisly case, of an improbable accomplice: a trained orang-utan. Among the photographs in this re-examination of Larry Sultan and Mike Mandel’s ‘Evidence’ there is one that seems to attest to the presence of an even odder beast. Across some stained and rain-stippled concrete paving two pairs of human feet have passed, but the prints are arranged so that it looks as though some chimerical quadruped has paused there briefly before loping onto the rough ground at the top of the photograph. Something strange has happened to the human body, and perhaps to the whole physical world that is archived here.

In 1974 Sultan and Mandel made How to Read Music in One Evening, a book composed of found instructional illustrations: a pair of disembodied hands empties a tray of ice cubes; nasal-hair clippers approach an anonymous nose with sinister intent. The following year the artists began approaching institutions and corporations with a view to extracting images from their photographic collections. (This show included some of their correspondence: the Asphalt Institute and the National Coal Association said yes; the Campbell Soup Company demurred: maybe they thought their cans had been on enough gallery walls already.) Then, two years later, 82 of these photographs were exhibited, under the title ‘Evidence’, at the San Francisco Museum of Modern Art. The accompanying book excerpted 59 of them, and the prints were purchased in the same year by the Center for Creative Photography at the University of Arizona.

In a sense, ‘Evidence’ is every bit as hilarious and unsettling as it must have looked in 1977. An unspecified hoofed animal is having its footprint taken; a man aims a blowtorch at a plastic bag covering the head of another; a hand edges a ruler up a wall to measure the distance between two stains. Mysterious calibrations are taking place; uncaptioned and out of context, these measurements become more strictly poetic than rigorous. Which is precisely the controversial shift that another set of documents records – Davis Pratt, curator at the Fogg Museum at Harvard, was willing to accept the sociological import of the original exhibition but unprepared for the ambiguity of its presentation. He wrote in 1977: ‘You chose not only to float the photographs but you added a bevelled window mat to heighten the pretentious effect.’ Pratt’s concern with such physical details reads now not only as though he had missed the Conceptual intention of the show, but also as if he had internalized some of the strangeness it discerns in the world of objects.

‘Evidence’ now looks like the record of an era in America that was as horrified by the material world it had made as it was enthralled by its commodified forms. Matter, here, is monstrous and unruly: a hideous white blob, like some useful polymer turned vegetal and grotesque, advances towards the viewer. Beneath a ‘radiation hazard’ sign a technician tends trays of plants that seem anaemic and alien; a pile of rocks is tethered by wire netting, as if it might otherwise start to stray. Machinery appears to have a life of its own: a nervous worker approaches a whirling, gyroscopic mass of metal and wonders whether to poke it with a stick. A field of small open pyramids, elevated on short poles, is listening, waiting for an invisible energy to be set loose in the landscape.

At a distance of three decades (many of the archival images are older, of course), ‘Evidence’ resembles a series of scenes from a mid-1970s’ disaster movie. With its empty highways, its tunnels, basements and anechoic chambers, it is of a piece with a certain late Cold War (and early ecological) dread. In fact, it is as if the cataclysm has already taken place, and these middle-aged men in skinny ties, hard-hatted engineers and implacable operatives in sunglasses are the last deluded survivors, convinced they can put the world together again. The Conceptual impulse behind the work has given way to a strange sort of nostalgia. But perhaps it was already there in the one colour photograph in the original show: a blue and a pink dress are suspended above a drip-tray, where a ghostly white pattern is forming.