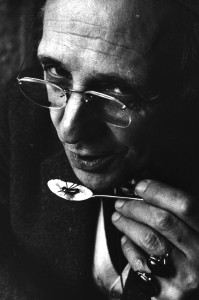 Ivor Cutler died in 2006 at the age of 83, after a 40-year career that spanned some 50 self-penned albums, children’s books and volumes of poetry. The Scottish poet, songwriter and humorist – though with his work there is little distinction between each title – is the only person I can think of to have elicited praise from both Johnny Rotten and Bertrand Russell. Though the whimsy of his gently delivered vignettes is anything but Punk, a delight in contrariness characterized both his work and his life – from teaching himself Chinese (for no other reason than that the textbooks were cheaper than the Japanese ones) to his apparent insistence on using ivory cutlery (the pun is characteristic) to his choice of instruments. Cutler’s baritone is usually accompanied by a wheezing harmonium and sometimes the spare notes of a thumb piano, neither of them instruments that encourage virtuosity.

His later years were spent in search of quietude (his favourite composer was Arvo Pärt) and, as a member of the Noise Abatement Society, Cutler often asked for ‘50 percent of normal volume’ from the crowd at his own concerts. A hushed album, A Flat Man – comprising 48 songs and poems delivered unhurriedly across 50 minutes – was first released in 1998 by the indie label Creation (then home to a range of British guitar bands from My Bloody Valentine to Oasis) and has now been reissued.

Exaggerated tales of a dour Glaswegian childhood and casual accounts of absurdist episodes litter Cutler’s work, and there are a string of small tragedies on A Flat Man, often recounted in jaunty rhyme (‘I was running down the stairs all day / Till I stripped and fell and broke my neck / And now I walk this way’); houses fall down, mice are crushed and cats are thrown out of the window. While the album begins with a macabre tale of the accidental drowning of Cutler’s mother (‘A Bubble or Two’), tender scenes of homely comfort and kitchen-sink exchanges are interspersed with call-and-response bad jokes (‘What’s your favourite jam?/ Traffic jam, it’s the jam for a man’).

Although he still rails quietly, for the most part A Flat Man finds Cutler – who was 75 when the album was recorded – happily ensconced in domesticity. In 1967 he had a small role as tour operator Buster Bloodvessel in The Beatles’ Magical Mystery Tour film, in which he announces: ‘I am concerned for you to enjoy yourselves – within the limits of British decency!’ Cutler’s humour pivots on his surreal approach to propriety, using quintessentially British traditions – weather-related small talk, cups of tea, knock-knock jokes – to frame his songs. Cutler had a skewed sense of generosity and was known for handing out homemade orange stickers that read ‘Funny smell’ to strangers in the street. On A Flat Man he warmly dispenses advice: on ‘Birdswing’, a thrush asks for Cutler’s opinion on her music and whether she should record a demo to send to prospective record labels. Cutler reluctantly tells her that it would only succeed as a gimmick.