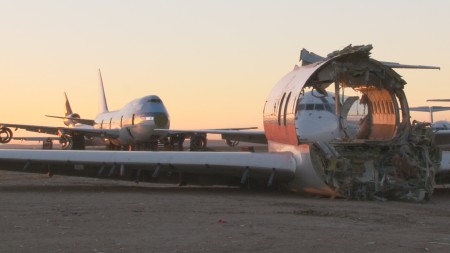 In each of five thoroughly researched films presented at the Neuer Berliner Kunstverein, Hito Steyerl investigates the parallel lives of images, their origins and their trajectories, mixing documentary and found footage with fictional elements. Two of her most recent works take the film industry and its detritus as their subjects. After the Crash (2009) didactically critiques how the Hollywood-supported business of renting destroyed planes as movie props discourages companies from recycling. Intercutting an interview with a scrap purveyor with crash footage and montages from action films, Steyerl nevertheless effectively skewers a largely unregistered Hollywood manoeuvre, whereby film violence perpetuates real-world waste.

Two longer films – November (2004) and Lovely Andrea (2007) – examine the ways in which images circulate beyond their original purposes, accumulating fictional meaning and becoming lost to their original subjects. Both works link back to the artist’s teenage friendship with Andrea Wolf. November opens with fight scenes from Steyerl’s first film, a Faster, Pussycat! Kill! Kill!-inspired story of women fighting men in the name of justice, which she made when she was still in her teens. It follows Wolf, the charismatic star of that first film, who later joined the PKK (Parti Karkerani Kurdistan, or Kurdistan Workers’ Party), a socialist separatist group regarded as a terrorist organization by the USA and the EU; Wolf was killed by Turkish police after being arrested in northern Iraq in 1998. Her body, we are told, has disappeared without a trace, but her image has since become an icon of martyrdom, displayed on posters at Kurdish protests. After Steyerl finds one such poster hidden among pornographic ones at a cinema, the artist considers the transformation of her friend Wolf as well as her parallel life as an image, from Wolf’s fictional character as a tough-as-nails feminist fighter to her guerrilla days to her eventual martyrdom. This path repeatedly brings Steyerl back to Germany: the Turkish army used weapons from the former East Germany’s stockpile to quell Kurdish uprisings, and one-third of Germany’s large Turkish minority is Kurdish. The international links to her friend’s death contrast with the isolation latent in the film’s title, which Steyerl’s voice-over explains during the film: ‘The time after October, a time when revolution seems to be over and peripheral struggles have become particular, localist and almost impossible to communicate.’

Commissioned for documenta 12, Lovely Andrea details the artist’s search for a long-lost pornographic photograph of herself as a bondage model, using the assumed name of ‘Andrea’, which was taken during the 1980s while Steyerl was studying at the Japan Academy of Moving Images in Tokyo. This search brings Steyerl into contact with the surprisingly expansive bondage industry – the photographers she meets admit that ‘many girls are tricked into it’ – as well as with the self-assured bondage model and translator, Asagi Ageha. (Ageha also stars in In/Dependence, a 2008 double projection in which she performs ‘self-suspension’: solo performances that draw on bondage modelling but emphasize acrobatic elements; in an inverted projection, she looks as though she is propelled upwards, floating weightless.)

Describing the Japanese film Gokushiteki erosu: Renka 1974 (Extreme Private Eros: Love Song 1974, 1974), Steyerl once told frieze that the film’s ‘intense mix of sexuality, lingering violence and militarization […] knocked me back: it evoked a politics of full contact, a documentary approach that was not only embedded but embodied.’ Steyerl likens her documentary strategy to the montage aspects of protest movements themselves: piecing together a platform, building a coalition. To that end, Steyerl amasses an eclectic array of sources, integrating unlikely windfalls from her research and selecting found-footage that effectively highlights and deepens the central narrative of each film.

BY Isabel Parkes, Candice Breitz AND Zoë Claire Miller | 18 MAR 22
MORE LIKE THIS