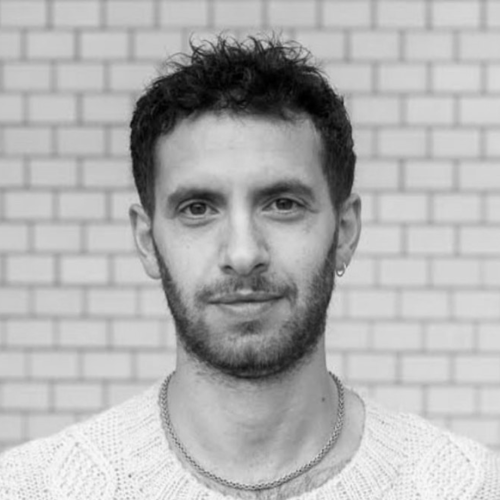 ‘I had 27 dads. The responsibility of raising a kid was completely decentralized in Iran,’ Lafawndah told me when we met last month, sharing vivid memories of her childhood. ‘I had an experience that was far from the nuclear family.’ The artist also recalls eating elaborate dishes on colourful carpets, the mountain peaks that surround Tehran, and the friends and family she parted ways with when she moved back to Paris at the age of six after four years in the capital. Since then, she has put down roots in New York, Mexico City, Los Angeles and London, but focusing on Lafawndah’s peripatetic tendencies – as has been the way in much of her previous press coverage – would be doing a disservice to a global musician whose genre-defying music (Ancestor Boy, 2019) is even more difficult to pin down than she is.

She opened for alt-R&B singer Kelela on her 2015 and 2017 US tours, joined musical forces with Japanese electronic minimalist Midori Takada for Kenzo’s short film Le Renard Bleu (The Blue Fox, 2018), and collaborated with Laure Prouvost on the ambient trip-hop soundtrack for the French Pavilion at the 58th Venice Biennale in 2019. But, with two critically acclaimed albums under her belt and high-profile supporters in the worlds of art, fashion and music, one can only speculate why Lafawndah still feels so underground. Most likely it’s because – at least for now – that’s the way she likes it. (She resisted having a Wikipedia page until 2020.) With an opera on the way, however, that might be about to change.

I met Lafawndah in Córdoba, where she was participating in ‘Meandering’, a research programme by TBA21-Academy that facilitates a deeper understanding of oceans through the lens of art. It is her third visit to the Spanish city, which, reportedly, was a paragon of intercultural harmony between Muslims, Jews and Christians during the Umayyad Caliphate (929–1031). ‘It’s a very important place to me,’ she says. ‘I feel like a daughter of that time.’

During ‘Meandering’, Lafawndah leads a choir workshop in a dimly lit cave outside the city with 80 attendees. Their murmurs and heavenly sighs sound both futuristic and prehistoric as Lafawndah’s mellifluous tones echo through the Earth’s cavity. She is performing a pared-down version of a song that will be part of her first opera, The Descent of Inanna, due to premiere in Paris during the autumn/winter season of 2024. (Further details are embargoed until next year.) Based on an eponymous Sumerian poem, the opera will be an ‘ecological fairy tale’ in five parts that mythologizes the birth of the four seasons. Lafawndah enlisted Colin Self, the Berlin-based artist who also wrote the original soundtrack to Martine Syms’s The African Desperate (2022), to work on the chorus and suffuse the production with his hallmark consciousness-expanding sound.

‘I’ve been interested in opera for a long time – both modern interpretations by Robert Wilson and Robert Ashley and the original working songs and sacred music that came before the imperial form of opera we know today,’ Lafawndah continues. The artist follows a fresh wave of artists taking their practice to the theatre: in 2017, Shirin Neshat directed a new staging of Giuseppe Verdi’s Aida (1871) at Salzburg Festival, while Marina Abramović debuted her first opera, 7 Deaths of Maria Callas, at Munich’s Bayerische Staatsoper in 2020. Unlike these examples, however, Lafawndah finds most contemporary art takes on opera lacking ‘both in pleasure and in any desire to actually stage a real story for the audience’.

The artist – who directs many of her own music videos (‘Daddy’, 2019) – confesses that ‘the economy of cinema was prohibitive towards most of the ideas I had for films, so theatre is a space of greater possibility for me right now.’ She goes on to explain that, given the age of the story she’s chosen to adapt, it made sense to use one of the oldest narrative mediums. Or as she describes it: ‘I wanted to follow the form of the story far into the past.’

Lafawndah’s music often pays respect to the ancient cultures of the many countries she has called home, and she never forgets to hat-tip her Middle Eastern heritage. ‘The Dawn of Everything’ (2022) is a charity single she released last month to support the work of human-rights activists in Iran, a place which she visits often and rarely strays from her thoughts. ‘I think about it every single day. We’ve been oppressed by a horrible regime that’s been destroying life, destroying agriculture, destroying women, destroying men and destroying children for 43 years. It’s time for change, but I’m very worried about how many people it’s going to take for that to happen.’ Serene and haunting, the song is melancholic yet hopeful as Lafawndah’s dulcet tones echo over static. She returns lyrically to the mountains of her youth: ‘They pour down from the mountain. Oh, the wind, the wind is blowing. Through the graves, the wind is blowing. Freedom soon will come.’