Mark Roeder wears his art on his sleeve. Repetition rather than imitation or appropriation may be the key to his enterprise; rather than narcissism driving imitation, repetition plays out and with the trauma of looking. As with the work of Elaine Sturtevant, the referent is obvious but not really the point. For example, in Roeder's photograph, Blondie on Green and White (2000), the cover of Blondie's album is placed on top of Daniel Buren's green and white lines, wittily invoking Blondie's career-making third album (Parallel Lines, 1978). Desire can only occur for what is not there, what is wanting, yet that absence allows Roeder to show the dream logic of Blondie 'signing' parallel lines while Buren 'signs' Parallel Lines.

Robert Smithson (with fairy-godmotherly assistance from Minimalism's two Dans, Flavin and Graham) and his Enantiomorphic Chambers (1964), later destroyed, were the structural heart of Roeder's début solo show. Taking the piss out of Frank Stella's materialistic insistence on the non-extraperceptual, Smithson with Enantiomorphic Chambers negated 'any central vanishing point'. In the work, 'it is as though one were being imprisoned by the actual structure of two alien eyes. It is an illusion without an illusion.' In a brief text from 1966, 'Interpolation of the Enantiomorphic Chambers', Smithson provided a diagram and statements with a 'paragraph from a fictive artist's journal'. The final statement, #7, was a quotation from H. G. Wells' The Country of the Blind (1911): 'They asked him if he still thought he could "see". ''No'', he said. "That was folly. The word means nothing ... less than nothing!'' '

Roeder considered and reconsidered every aspect of what it means to present work for a show: low gallery's unorthodox occupation of two small non-contiguous storefronts, the photographic correlatives of his project, the two similar yet pointedly different press releases, one 'signed' by a diagram recalling Smithson's diagram for the chambers, and the other with Roeder's signature, as if the diagram and signature could stand for or reflect the other.

Smithson's work was made out of steel and painted with blue and green and hung on the wall. Roeder placed his two works on the floor of the triangular space; the one most resembling Smithson's chambers looked like a chunky arrow from above, the tail made of one mirror panel and one empty panel frame. Enantiomorphosis (Left or Right Hand Unit - Wood) (2001), is unpainted wood, which, because of the position of the mirror panel, looks from many angles as if there isn't a mirror present at all but empty space; in other words, the eye is seeing something like its blindness, blind to what it's actually seeing. Enantiomorphosis (On the Floor - Green, Blue, Wood) (2001) is made of wood painted a vivid blue and green, but the thing itself is shattered, like a Smithson envisioned or deconstructed by a Constructivist. The materials for both pieces are listed as mirror and wood, but with the painted piece it was hard to discern any mirror, unless the piece's completion was accomplished by gazing at it in the mirror of the other, unpainted 'twin' structure. If these things repeat or reflect Smithson's chambers, then the best way to see them may be as reflections or dreams. It is as if, without any anthropomorphism, Roeder is accomplishing the Lacanian mirror stage of art, the Gestalt of itself as an ideal but prefiguring itself as an 'other', alien. Unlike Sam Durant's work, Roeder's isn't illustrative. Reflections upon reflections, his pieces are themselves ideas.

Taking lessons from the acutely intelligent work of Larry Johnson, where the photograph appears to be something else (drawing, animation) and not that, Roeder complemented all his sculptures with resonant matt C-type prints, seemingly diagrams of the structures' reflective operations - and yet it is the structures that seem to refer through hue and tone to the photographs, as if they (the sculptures) were the diagrams, rather than the other way around.

In the gallery office a bright red vinyl decal complicated what the photographs were and how they operated even further, in being the most (the least?) diagrammatic and abstract. On the long table top Four Mirrors, Brief Meditation (2001), a corner made up of three mirrors, was situated across from a fourth mirror held up by a fuchsia wood ballast. The mirror facing mirrors produced a seemingly infinite reflection. Perhaps it is an allegory for how art responds to art or how numerous the responses to it are. In his press statement Roeder wrote: 'Really, I was initially drawn to Smithson when I saw the photograph of him in front of the Enantiomorphic Chambers, I mean he looked so Prada 97.' 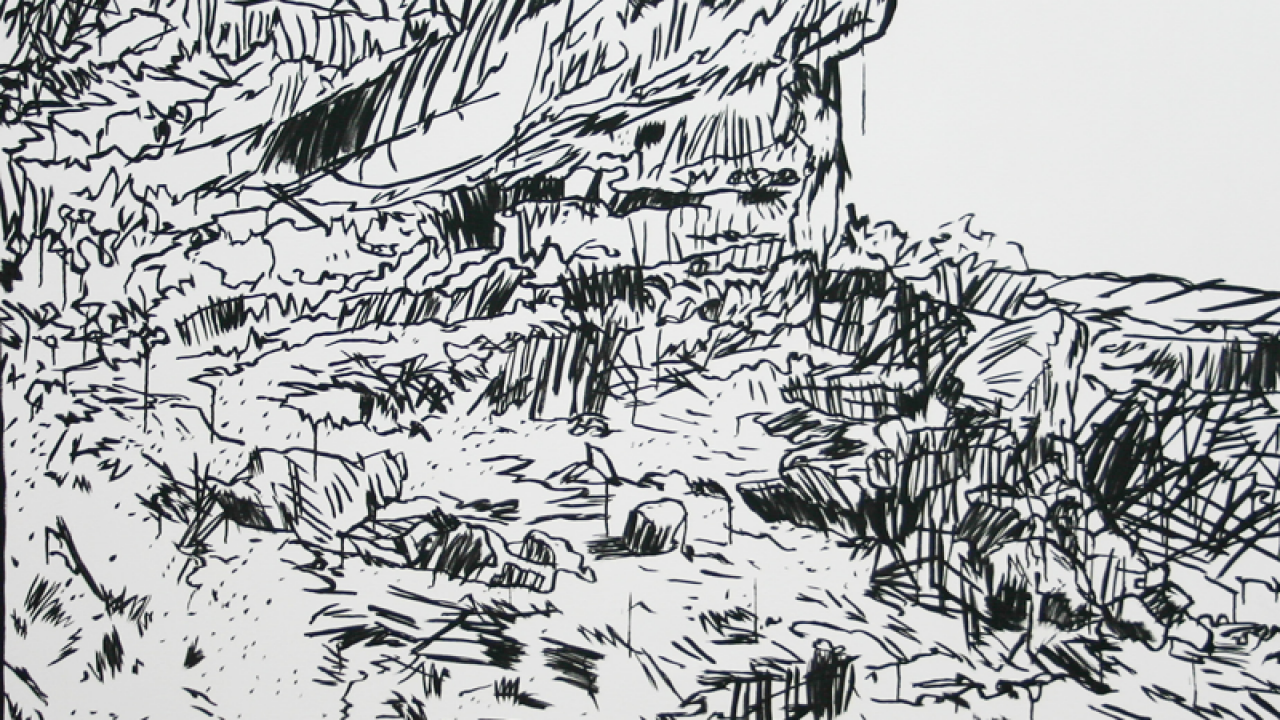