Hauntology suggests new approaches to exporing the buildings of the recent past, argues Mark Fisher 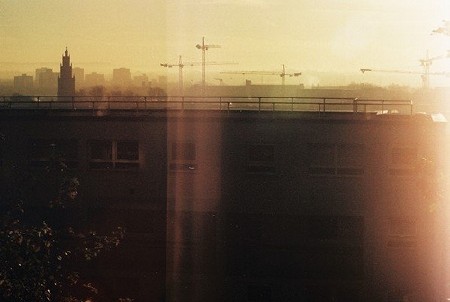 At the Hauntology Now symposium earlier this year (part of the Atmospheres 2 festival, at the Museum Of Garden History), writer Christopher Woodward showed some extraordinary slides of Detroit’s Fordist architecture. Now fallen into picturesque dilapidation, the buildings seemed to form a post-industrial counterpart to the Roman ruins that were the traditional objects of Romantic reverie. Walking in ruins places us in a strange state of temporal dislocation, in which the past is simultaneously absent and present, for which Derrida coined the term ‘hauntology’ (in Spectres Of Marx, 1993). In the past three or four years, the concept of hauntology has been revived in discussions about predominantly musical artefacts that seem to dwell in cultural ruins. As an alternative to postmodern exhaustion, acts like Philip Jeck, The Caretaker and Mercury Prize favourite Burial have produced dilapidated versions of past forms, interred beneath a fog of crackle.

Extending the analysis presented in his book In Ruins (2002), Woodward argued that we need to poeticize such relics of the near past. Woodward – who was oddly enthusiastic about the ‘development’ of East London taking place as part of the 2012 mega-project – overlooked the way in which these activities are already underway precisely in the areas of the East End on which the Olympic follies are being erected. Witness, for instance, the Heronbone blog, once described as ‘located between W.G. Sebald, Wiley from Roll Deep and Iain Sinclair’, but now disappeared, like many of the stretches of the Lea Valley which it evoked in fragmentary entries written in a rogue poetry infused with the rhymes and rhythms of pirate radio; the psychogeographical collages in the Savage Messiah fanzine and website, which draws a fractured map of London by following lines of social antagonism; the work of Sinclair himself, whose passionate hostility to 2012 informs his latest project, a book about Hackney; the photographer Stephen Gill’s Architecture In Reverse (2007), which traces the Lea’s transformation in a series of eerie pictures. Late last year, Robert Macfarlane, author of The Wild Places (2007), reported on a journey that he and Sinclair had taken through Gill’s stalking grounds, savouring the bizarre interfusions of dereliction and overgrowth: ‘green algae thickening the canal water to the texture of snooker baize, massive old ent-like willows, escaped apple-tree orchards, buddleia lolling from brickwork and bridge edge, the witches’ garden of rubble heaps.’

Poetics connects with politics here. Late-capitalist time is bound into a seamless circuit organized by PR: the past is diminished to a sequence of anniversaries to be commemorated; the future is projected forward as a series of pseudo-events. Evidently, these future events are not waiting passively to happen; they are already operative in the present. 2012, reputedly the year of the Mayan apocalypse, already functions in London as a target date for the culmination of intitiatives that have no connection to the Olympics as such. As the jaded carnival of 2012 proves, we live in the permanent shadow of pseudo-events that never really happen, but which are always being anticipated. These pseudo-events never happen precisely because they are not events at all; there is nothing unpredictable or unexpected about them.

The theory of the event – what constitutes a genuine event; how to maintain fidelity to an event that has ‘ended’ – has been the subject of some of the most urgent philosophical work of the past 30 years. Baudrillard, for example, was one of the first to understand the way in which postmodern culture retrospectively converts actual events into pseudo-events. Witness the way in which May ’68 – an event that was so crucial for Baudrillard, as well as Deleuze-Guattari and Badiou – has become the occasion for another empty commemoration on the year of its 40th anniversary. It is, perhaps, the very featurelessness of the current ‘eventless horizon’ which has motivated the turn to spectrality; hauntology is about attuning ourselves to the ways in which traces of events continue to perturb the present. What is important here is not the reiteration of the actual past, but the persistence of what never actually happened, but might have – the logic of events that failed to fully enfold but which can still be returned to.

The eventless time of postmodernity has its correlation in the collapse of differentiated spaces. The Economist recently described a new nomadism, which, it claimed, has nothing to do with the commonplace understanding of nomadism as equivalent in meaning to migration. This wireless nomadism frees workers from offices, allowing them to perform immaterial labour in ‘physically inhabited but psychologically evacuated’ spaces such as coffee bar franchises, the very archetype of the so-called ‘third place’, a zone which is neither at home nor work. On entering these cloned spaces, you could be anywhere. This vertigo of placelessness produces what I have called ‘nomadalgia’ (a counterpart of hauntology): all those interchangeable hotel lobbies and fast food concourses induce a craving for a specific sense of space. One response to nomadalgia might be a return to the pre-industrial sacred spaces which Paul Devereux, another of the speakers at the hauntology event, is producing fascinating ‘archaeoacoustic’ studies of. But I would prefer to remain in the ruins, to reclaim the wasteland for a reinvigorated modernism, a modernism that, at the moment, exists – or rather insists – only in a spectral form.