Role-playing and cultural identity; a maharaja, a dandy, a queen and a hairy ‘native’ 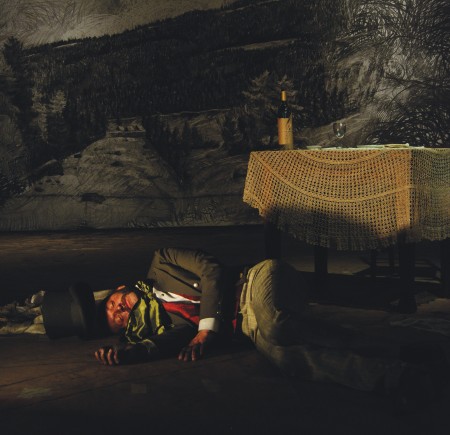 Visitors to ‘Marina Abramovic Presents’, an exhibition of performance art at the Whitworth Art Gallery, Manchester, in July, might have made the acquaintance of a dazzling cast of characters. Over the exhibition’s 17 days, Indian performance artist Nikhil Chopra adopted an array of personas, switching from a loincloth-clad ‘native’ (hunched ape-like over a table, gobbling chocolate cake) to the stately Sir Raja, a 19th-century maharaja complete with gold buttons and sleek riding boots. Another day saw him as a Victorian dandy wearing impeccably tailored plus fours, a character Chopra calls Yog Raj Chitrakar. On the last afternoon, he ended up as ‘the Queen’ – in wide-hooped skirts festooned with creamy lace. These transformations often took place in front of visitors, and were set against the backdrop of a massive charcoal wall-drawing of mountains that Chopra, during the course of the exhibition, composed. This retinue was already familiar to followers of his work; he has referred to this piece, Yog Raj Chitrakar: Memory Drawing VIII (2009), as ‘a performance about performance’: a retrospective of sorts.

It is unsurprising that Chopra feels the need to take stock. The Mumbai-based Kashmiri has had a busy two years. This year, he performed in ‘Fare Mondi – Making Worlds’ at the Venice Biennale, directed by Daniel Birnbaum, and at Brussels’ Kunstenfestivaldesarts 09. As one of India’s few internationally recognised performance artists, he was included in the Serpentine’s 2008–9 survey exhibition ‘Indian Highway’, for which he pitched a tent outside the gallery and walked about as an effete fur-coated gentleman, reminiscent of an Ottoman general.

The artist has become known for his aloof role-playing; when in character, he never speaks and seldom makes eye contact. The performance Yog Raj Chitrakar: Memory Drawing II (2007), which was presented in a warehouse above his Mumbai gallery, Chatterjee & Lal, marked a major development in his career. It lasted for 72 hours – at the time Chopra’s longest performance – and introduced the principal actors in his subsequent adventures. Chopra’s multiple personalities prompt us to reassess our assumptions about gender, race and India’s colonial baggage. By deliberately bending gender – from the manly ‘native’ (hairiness symbolizes virility in India) to the foppish dandy and the mincing Queen (is the double-meaning intended?) – he also takes a swipe at conceptions of Indian-ness. The character of the dandy is modelled on his paternal grandfather, Yog Raj Chopra, a ‘gentleman landscape painter’, and draws on his family’s aristocratic past as Kashmiri landowners. For Yog Raj Chitrakar: Memory Drawing VIII, Chopra used one of his grandfather’s paintings from the 1930s as the basis for his own wall-drawing. (The word chitrakar translates as ‘picture-maker’.) Was its inclusion in the Whitworth, a space normally devoted to traditional watercolours, a strategic re-writing of history? One in which his grandfather is given the recognition he deserves?

Chopra merges these reflections with seductive, multi-disciplinary allusions. His lavish outfits are made for him by the costume designer Tabasheer Zutshi, who works to the artist’s specifications. For the Kunstenfestivaldesarts, he extended his theatrical and art-historical language with Yog Raj Chitrakar: Memory Drawing VI. Inhabiting a chapel for four days and nights, he used theatrical equipment – blue and red lighting and swathes of red and white cloth that he draped around ladders – to fabricate elaborate backdrops for various tableaux. One evening, Yog Raj savoured a three-course meal at a table laden with luscious fruit; in the soft light, the apples and peaches looked as if they had tumbled out of a 17th-century Dutch still life. In reference to the sculptures and paintings in the Belgian National Gallery, Chopra’s Queen was not a crinoline-skirted Victorian, but a Neoclassical damsel inspired by a painting by Jacques-Louis David, draped in silk and wearing a wig of long black curls. Her static pose (Chopra sat motionless for an hour) was simultaneously inspired by the gallery’s marble sculptures. For Chopra this work wasn’t simply a play on art history but a rumination on the way that a city ‘looks at itself through its painting and sculpture’. The Queen sat beneath a charcoal wall-drawing of Brussels that encompassed both its ancient and modern architecture.

Despite the merits of Chopra’s astute use of cyclical time (his smooth overlapping of past and present), his performances might be getting too repetitive of late. His presentation at ‘Fare Mondi Making Worlds’ was an anti-climax after Brussels: the new Queen with her Grecian robes appeared again, but with less social context. It is likely that Chopra realizes his oeuvre needs re-inventing. He speaks about his most recent performance in Manchester as a ‘re-visiting’ of all his major personas, and notes that while working on his wall-drawing he smeared charcoal everywhere, ‘reducing all the costumes to ashes’, perhaps clearing the ground for another series of phoenix-like transformations. 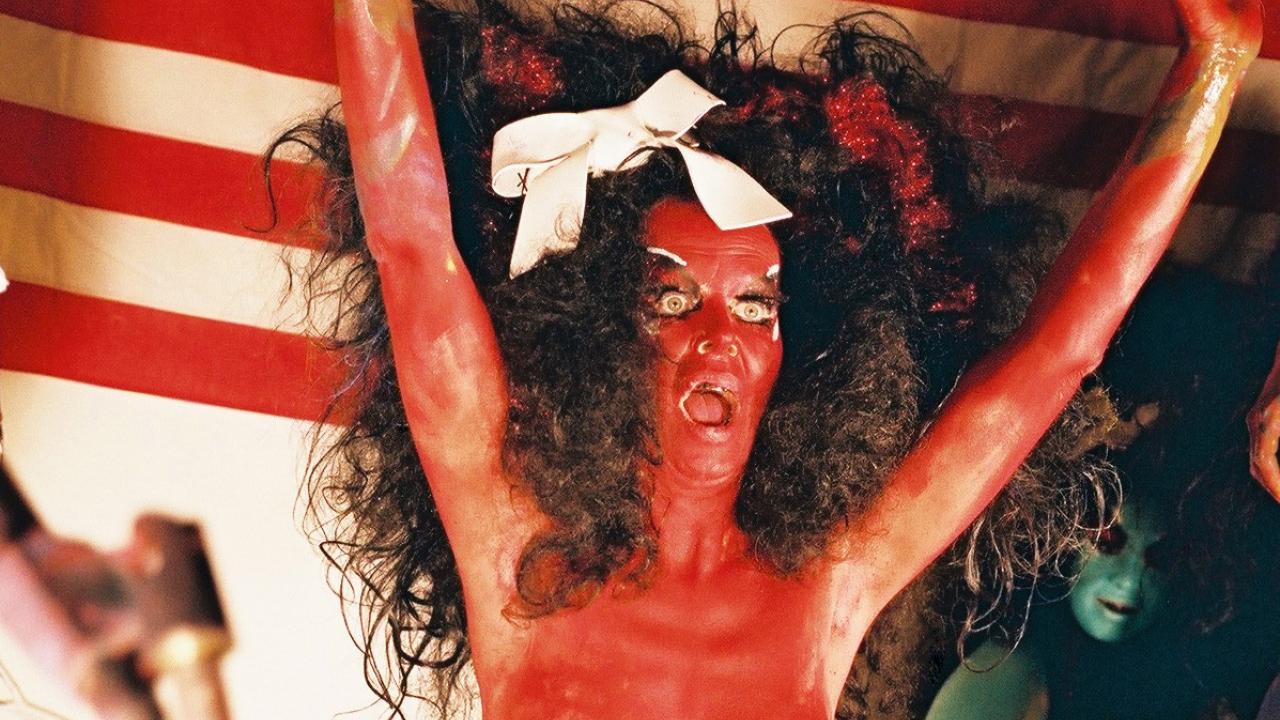 Interviews
What’s Behind the Voluptuous Horror of Kembra Pfahler? 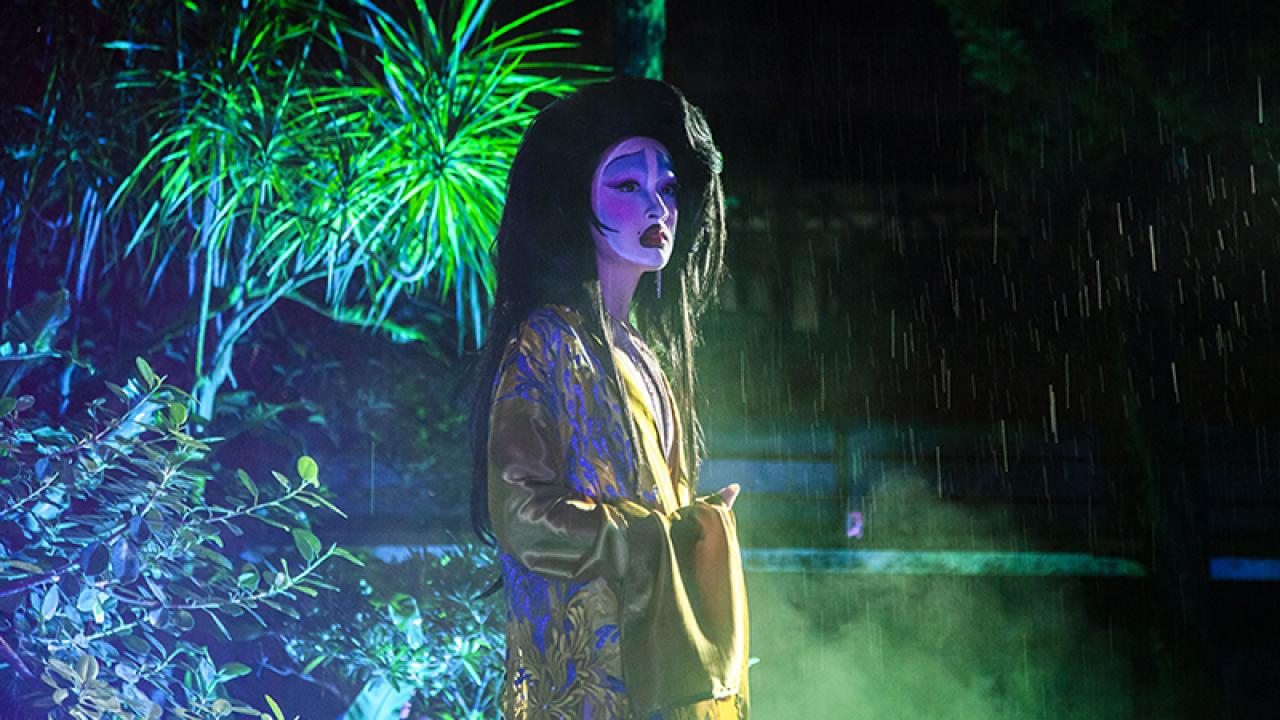