No Escape from Empire: Cameron Rowland at London’s ICA

In the text that accompanies Cameron Rowland’s current exhibition ‘3 & 4 Will IV. c. 73’, at the Institute for Contemporary Arts in London, the US artist links two dates: 1661, the year the colonial English legislature made the regulation and policing of the enslaved mandatory for all freemen in Barbados, and 1800, when British Parliament passed the Glasgow Police Act. [1]  As Rowland notes: ‘[t]he slave patrol preceded the existence of the police in Britain and its colonies.’ In 1829, when Home Secretary Robert Peel created the London Metropolitan Police Force, Britain also had slave patrols and tenant militias policing captive Black populations on its West Indian plantations. Given that the United Kingdom was created from colonial violence and slave-trading wealth and now sustains itself by disavowing the same, it is unsurprising that few today connect contemporary British police forces with their forebears in England’s Caribbean and North American plantation colonies. Yet in many published British discussions of police abolition, the omission gapes, even as the origins of US police in slave patrols is accepted, and even as Black people in the UK are more intensely policed than any other population.

The English codified the choreography of Black capture in the 1661 Barbados Slave Act. Titled An Act for the Better Ordering and Governing of Negroes, it was the first comprehensive slave law written in English, and it was widely copied. After helping to formulate the Barbados Slave Act, Thomas Modyford, a trained barrister, went to Jamaica along with 800 fellow English planters, where, in 1664, as the newly appointed Governor, he implemented it virtually unmodified. When English planters appropriated the land now known as the Carolinas (named for King Charles I), they took the off-the-books custom of publicly castrating rebel slaves practiced in Jamaica and Barbados and added it to their 1691 slave code. In Antigua (1702) and Virginia (1705), too, English planters organized into legislative assemblies either adopted the Barbados Slave Act wholesale or used it as the basis for whatever maximally exploitative version suited them. Back in England, King Charles II rewarded Modyford’s lawmaking with a Baronetcy of Lincoln’s Inn.

In Barbados, 1661 marked the first year since English settlement that enslaved Africans outnumbered the white population and there were continuous uprisings. White indentured labourers, including Irish servants, also rebelled. On the same date he signed the Barbados Slave Act, the Deputy Governor Henry Walrond, a sugar planter from Ilminster, also signed the Servant Act to increase the rights and entitlements of white labourers. The preamble of the Barbados Slave Act, however, frames enslaved resistance to captivity as evidence of African ‘baseness’ and innate violence, which in turn justifies the punitive clauses that follow (an alibi that, for the British, has stood the test of time). In the same section, the lawmakers use ‘negro’ interchangeably with ‘slave’, introducing their primary aim: cementing racial slavery. The act prohibited the enslaved from giving legal testimony against anyone but each other and from trial by a jury of their peers. White people of any status were within their rights to kill ‘a negro or other slave by night and out of the common path’. Black self-defence was punishable by death. The Barbados Slave Act made it the legal duty of all whites to watch, apprehend and punish captive Africans. White servants received financial reward or reduced indenture for policing, creating what Hilary Beckles in Natural Rebels: A Social History of Enslaved Black Women in Barbados (1989) calls a ‘white community’ that ‘functioned under law as a collective police force’.

Although the slave had no legal rights and provisions beyond those protections afforded ‘other goods and Chattels’, English lawmakers were careful to categorize Africans as fellow ‘men’. It was not exclusion from the category of human that fixed Black subjection in English colonial law, but inclusion. The same law that put Africans at the bottom of the tiered European conception of  humanity, made indentured servants white, granting them safety, binary gender, and the right to own property and wield violence. Dazzled by their new mobility in this racial pyramid scheme, unpropertied whites worked with English planters to hone policing techniques. A mounted and uniformed militia patrolled on weekends and holidays, performed twice-monthly searches of slaves’ homes, pursued runaways and attended all gatherings of enslaved people – markets, funerals and celebrations included. When exhaustive patrols did not deter insurrection plots in 1675, 1692 and 1701, the Barbados Assembly moved towards total surveillance. Between 1696 and 1702, they introduced the tenant militia, first installing 2,000 imported English soldiers on plantations and then offering indentured servants rent-free land to serve as live-in plantation police. It was over 100 years before there was another co-ordinated, cross-plantation rebellion in Barbados.

As policing evolved, the numbers of maroons ‘run away into woods’, bemoaned in the 1661 Barbados Slave Act, dwindled. Yet, the enslaved still ran away – even without hope of reaching the alternative to plantation life that Maroon communities symbolised elsewhere in the Caribbean. Baffled by the networks that enabled petit-marronage, historians surmise that enslaved people held it a moral obligation to harbour those related to them by blood. If English planters also tried to understand Black freedom networks through their European obsession with consanguinity, that was perhaps a misrecognition that served in the runaways’ favour. In Journal of a West India Proprietor (1834), the English author Matthew Lewis records a conversation with his Jamaican slave who claims a man named ‘Old Luke’ as kin because ‘[h]e and my father were shipmates.’ Within the crisscrossing violence of the plantation, some of our ancestors knit new forms of Black relatedness from otherwise obliterating harm, abiding time to make shelter from trauma, fashioning the networks that birthed Bussa’s 1816 uprising. Even as we descendants of the enslaved live within structures invented by Europeans, we also have access to an inheritance of transformation.

In the ICA’s lower gallery, three police car searchlights are mounted on three load-bearing piers. The text alongside probability of escape (2020) traces three layers of descent – from the Barbados Slave Act, to the 1690 South Carolina slave code, to South Carolina’s 2012 statute – revealing the enduring legal logic that permits the taking of Black life; in the wording of today’s laws, there is no need to even name the ‘negro’. Against Britain’s exceptionalism, Rowland’s genealogy is satisfying. I relish its sharpness while also feeling the heaviness of living in the homeland of the authors of Barbados Slave Act. With help from the academy, Britain works at both ends to erase the origins and effects of its laws and institutions. Yet, as few statistics and ample lived experience testify, British state bodies still know whom to target. 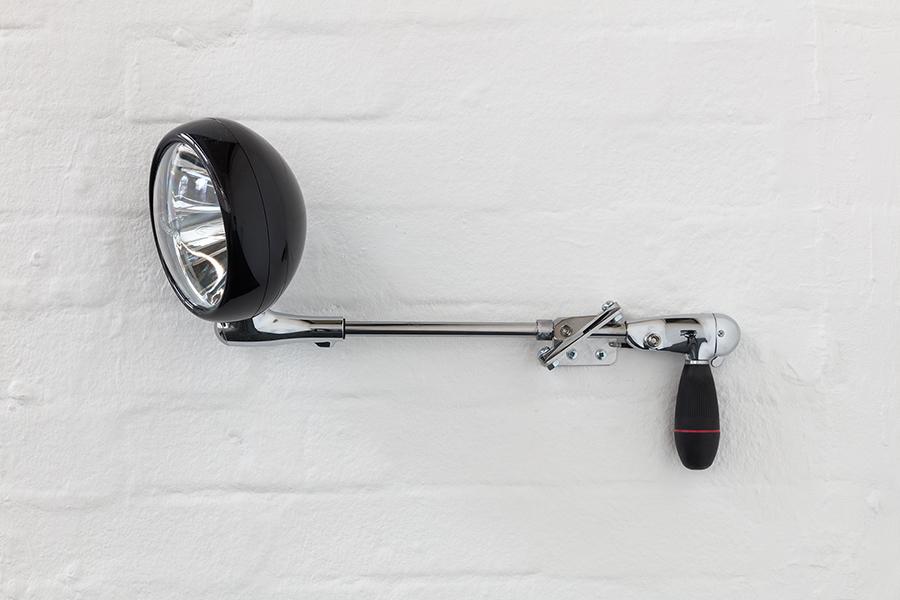 “[I]f any poor small free-holder or other person kill a Negro or other Slave by Night, out of the Road or Common Path, and stealing, or attempting to steal his Provision, Swine, or other Goods, he shall not be accountable for it; any Law, Statute, or Ordinance to the contrary notwithstanding.”
– ‘An Act for the Governing of Negroes,’ Barbados, 1688

“[I]f any person shall kill a slave stealing in his house or plantation by night, the said slave refusing to submit himself, such person shall not be liable to any damage or action for the same; any law, custom or usage to the contrary notwithstanding.”
– ‘An Act for the Better Ordering of Slaves,’ South Carolina, 1690

“A citizen may arrest a person in the nighttime by efficient means as the darkness and the probability of escape render necessary, even if the life of the person should be taken, when the person:
(a) has committed a felony;
(b) has entered a dwelling house without express or implied permission;
(c) has broken or is breaking into an outhouse with a view to plunder;
(d) has in his possession stolen property; or
(e) being under circumstances which raise just suspicion of his design to steal or to commit some felony, flees when he is hailed.”
– SC Code § 17-13-20 (2012), South Carolina, current statute

[1] Derica Shields will be presenting a text from her forthcoming book Bad Practice (2020) at the ICA as part of the talks programme for Cameron Rowland’s exhibition.

Main image: Royal Marines from the HMS Rodney instruct members of the 'native police' in how to assemble and use a Lewis Gun, 1934. Courtesy: Getty Images; photograph: Fox Photos/Hulton Archive

Derica Shields is a writer and programmer from South London. She is currently developing a multi-format oral history project centring on black people’s accounts of the UK welfare state, and completing a book project on failure.