The fleeting enchantment of paper aeroplanes 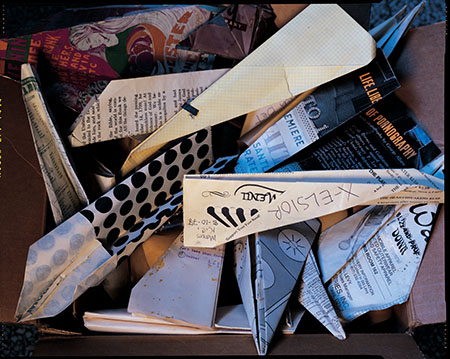 The litter of daydreams, ephemera incarnate, built on a whim and with a lifespan of seconds, the paper aeroplane is a mayfly whose sole, transitory purpose is to act as the medium for fleeting subconscious romanticism. Such ecumenical and slight vehicles of yearning naturally appealed to musicologist Harry Smith (1923-91), for whom the detritus of the world sang out in one universal, unifying song.

Smith could see heaven in a crushed Budweiser can (of which he amassed a large collection) and hear eternity in the wheezing death coughs of hoboes (of which he made numerous recordings). From the late 1960s to the early 1980s he scoured the streets of New York for paper aeroplanes, meticulously cataloguing and filing them away in five large cardboard boxes. In 1984 he donated his collection to the National Air and Space Museum in Washington D.C. Then, as if lost in a pulp-hungry Bermuda triangle, they disappeared.

When Smith died in 1991, it was thought that the planes had been lost forever until, like carrier pigeons returning to their coops, one box turned up in the bowels of the Anthology Film Archives, back in New York. Less object trouvés than anthropological finds, the planes offer a unique glimpse into the dream life of their creators. Some planes pointedly deny their own transience, being endowed with redolent, mock-heroic names such as X-Elsior, while other tacitly acknowledge it, such as the ill-starred Flying Titanic. All conspire to transmogrify the banal - a losing betting slip metamorphoses into a high-velocity escape craft, a bus timetable becomes a pencil-thin Concorde, algebraic equations are sculpted into aeronautical masterpieces. At times the effects touch on the sublime. One plane is made for a clumsily folded page of a kindergarten book. The text underneath the picture of a boy gazing into the air has obviously acted as a striking imperative on the unknown constructor. It reads: 'Oh! How I wish I could fly, there's so much to see in the sky.'