An acknowledgement of irrationality in the face of the most rational 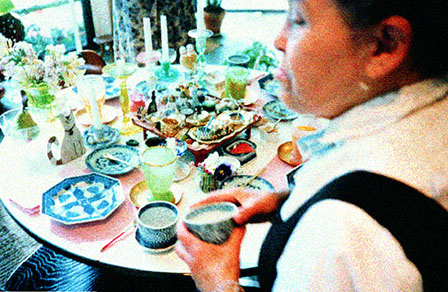 I took this picture of Ray Eames at her table to document a breakfast visit I made to the famous house in the mid-80s. She had put a great deal of thought into the table setting, making her guests wait until she felt it was perfect. The activity seemed partly a performance for the guests’ benefit, partly a ritual for the completion of the house itself. I don’t remember what we ate, but I do have what I’m pretty sure is a false memory of eating with plates on our laps to avoid the clutter on the tabletop.

That clutter on the breakfast table: an old lady’s fetish, or an unacknowledged subversion of the house’s austere Modernist grid? The Eameses referred to their taste for ornamentation as ‘functional decoration’, a term laced with what we now call ‘spin’. Functional decoration was a visual contrast to the products of mass production, an acknowledgement of irrationality in the face of the most rational. Perhaps that morning we were presented with an explosion of consciousness on the significance of waking and facing the day, honouring it with a review of the commonplace, the stuff of millions of mornings around the globe. Were we not confronted by information on that table? The Eameses were, after all, pioneers of the multi-screen presentation, believing that a modern audience could ingest copious ideas through the juxtaposition of images. At the end of the century, with our current mania for ‘mid-century Modern’, it is important to remember that the Eames’ legacy is not the plywood chairs, nor their refined version of the industrial aesthetic, but the contemporary taste for information overload, and the aesthetic that goes with it: articulated, decorative, multicultural, democratic and made up of millions and millions of tiny bits.