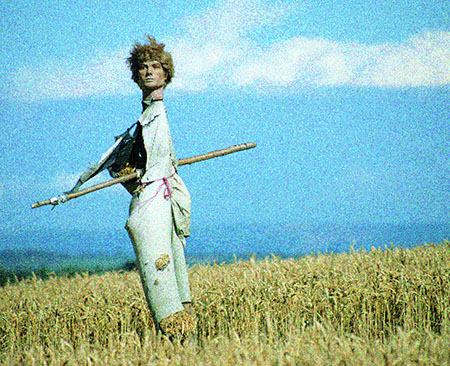 The first time I came across a scarecrow that I was really afraid of was during a walk through farmland around Birmingham a couple of years ago. It was on a run-down pig farm – not at all rustic, more like something out of the Texas Chainsaw Massacre (1974). Taped to a post on a public footpath, the scarecrow wasn’t really fulfilling its supposed function; it was actually intended to keep people out. I think some farmers use them as ‘scarepeople’, because they don’t want walkers on their land. A long time ago in Britain, scarecrows were burnt as sacrifices during Pagan ceremonies, to bring a good harvest. When Christianity arrived, this practice, like so many other old rituals, was stamped out because it was considered too debauched. (Although in Lewes, Sussex, they still burn effigies of the Pope on Guy Fawkes Night.) But scarecrows remain, although it’s actually much more effective to scare birds away with noise. Nature is often perceived as being weak and under threat, but in the film The Wicker Man (1973), which has a giant scarecrow starring in its final scene, Nature triumphs. I have a real fear of the countryside, and this has come to be embodied in the scarecrow, particularly when they are made of rubbish – odd wellington boots, plastic bottles, and junk scavenged from old barns. As Sherlock Holmes once said: ‘the lowest and vilest alleys in London do not present a more smiling record of sin than does the smiling and beautiful countryside.’