The final resting place of the British architect 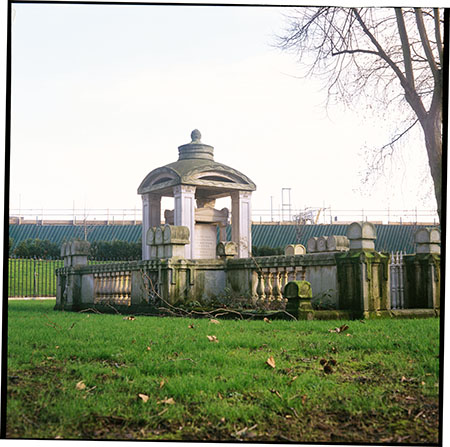 London’s Sir John Soane Museum is a secret everyone seems to know about. Tucked away in Lincoln’s Inn Fields, the Regency architect’s house is a perfect junk-shop, crammed with paintings by William Hogarth and fragments of Gothic cathedrals, an Apollo Belvedere and a varnished human skull. Though it was completed in 1813, the building’s not quite of its time. Kurt Schwitters would have liked it, and so would Jorge Luis Borges. It’s a good place for second dates. Maybe someone’s taken you there.

Soane’s mausoleum is a different prospect. Beached in a maudlin park behind Kings Cross Station, it’s the kind of secret you stumble across by accident when you decide – for no particular reason – to walk home by a different route. At first I didn’t realize that it was a tomb. With its jolly Classicism and petticoat of overgrown grass, the mausoleum looks more like the final hole on a crazy-golf course. The vertiginous steps are a giveaway though, tumbling into the ground at an impossibly sharp angle. This might have filled me with a sense of foreboding, but Soane’s tomb is more about a headlong rush through life than a gloomy plunge into the hereafter. Although the structure’s not much bigger than a suburban conservatory, it’s crammed with an enormous amount of architectural detail, a whole Parthenon’s worth of creamy-coloured columns. At its four corners Soane placed some fugitive Ionic capitals; on the tomb they’ve become petrified waves, liquid energy turned into stone.

Despite its gloomy setting, Soane’s mausoleum feels hopeful – about life, death and the possibilities of architecture. Having built it in 1816 to house the body of his wife, Elizabeth, Soane slipped in beside her in 1837. Few people visit their own grave before they die; fewer still design it themselves. I’ve a hunch, though, that something rather special happened during the widower’s visits to the mausoleum. Nikolaus Pevsner wrote that the 19th century ‘forgot about Soane’, but by the 20th century architects were revisiting his legacy. Sir Giles Gilbert Scott based the roof of K2, the first red telephone kiosk, around the stone canopy of Soane’s tomb. Perhaps Scott understood that graves are about communicating with our dead as well as mourning them, and maybe that’s why Soane’s mausoleum seems so oddly cheerful. It’s good, after all, to talk.