For this regular series, the Cologne-based artist presents a series of images that are important to her

We’re in the middle of nowhere – on a high mountain, 2,097m above sea level. While focusing my camera on this scene of slaughter, I ask myself whether it’s the many years living as a devout vegetarian or merely my intensely fixed gaze that makes my eyes start to water so profusely.

My cousin is completely grossed out by what’s taking place in front of us and tries to shut it all out with the help of the hip hop music pouring out of her headphones, asking herself out loud how she could possibly be part of such a barbaric family. Meanwhile, my mother, my aunts, and especially my grandparents act as though it is the most natural thing in the world. It is my grandfather who proudly initiates the ritual and performs the fatal cut.

It was his idea to make this journey – together with the entire family – back to his roots. For my part, two generations on and a native of Cologne, I would never have been able to deny him this wish. And yet here I stand on this mountain, asking myself what these ‘roots’ mean to me.

I go over to the goats one last time. They stand close together, trembling and waiting. I wipe away my tears and think about how hypocritical this is of me, just because their fear can be sensed and their trembling can be seen, here at the open-air slaughterhouse, where the crimson red of the blood still can’t compete with the azure blue of the sky. People from the whole region come here, waiting for the butcher to carve the meat and fill their plastic bags.

At this holy place, with its history of ritual sacrifice, this image sticks with me. But it is accompanied by a silent gratitude, knowing that these traditional rituals, handed down from generation to generation, are slowly dying out.

During my studies, I worked for Julia Stoschek in Dusseldorf. For years, I was able to spend my weekends with all the amazing works in her collection, which ultimately made a much more lasting impression on me than I had imagined at the time. A number of works have stayed with me over the years, but I have developed a particularly strong connection to the work of Gordon Matta-Clark.

Although the works are of course much older, I always felt a strong alliance between his fascinating films from the 1970s and my own youth in the 1990s. This still is taken from the film City Slivers (1976), a work by Matta-Clark that was shown in the collection presentation titled 'Number Five: Cities of Gold and Mirrors' (2011-12). Using a technique that we would now probably call ‘split screen’, he was able to simultaneously show up to four pictures of buildings in New York, interspersed with black intervals. I was able to watch the film over and over again, since the exhibition lasted almost a whole year. The feeling it gave me was that of an inner silence, a balance between watching and feeling; the ability to reflect on my own feelings which were triggered by the film itself. One could say that I witnessed here for the first time something akin to ‘emotional reflection’ through art.

More generally, I guess his work has always fascinated me because he was able to show an inner structure through incising, clipping and cutting, resembling a struggle with the own ego, which is infiltrated deeper and deeper and excavated layer by layer. To quote Matta-Clark himself: ‘I have chosen not isolation from social conditions, but to deal directly with social conditions.’

I Want to Believe

This poster was hanging in my room for years – a total ‘must have’ for any true The X-Files fan at the time. And that amazingly frustrating ‘love story' between Scully and Mulder ...

It actually surprises me how much I still like it, since – to be honest – I’m quite the scaredy-cat. I heard they recently aired a new season. I’m so curious!

This picture was taken at Kemal’s wedding. Kemal is my mother’s cousin, but I barely remember him – besides the fact that he was always wearing sweat pants and tank tops. Only later did I understand that he was actually a bodybuilder and loved to wear ‘Uncle Sam’ training gear. He married Kerstin, a young woman from the German countryside with endlessly long blonde hair. As far as I know, the marriage didn’t last long; and I’m also not sure of what happened to the belly dancer.

What I do remember very well is the feeling I had as a little girl that night. So full of energy and grateful that I was allowed to stay up a little longer than usual. I tried all night long to follow the dancer’s moves. I wanted so much to be just like that dancer. She was the most beautiful woman in the world to me – all the glitter, the rose colour of her costume, her fancy jewellery. I was absolutely convinced that no one else on earth could move like she did. So limber, so smooth, her belly in a flow with her hips, moving from one corner to the other, so precisely and so in sync with the sound of the Turkish music.

I like this picture a lot because I have such a precise memory of that night. There was nothing more important to me at that time than to simply stay awake as long as possible. It’s funny how things change: Today, I often feel like I can’t make it to bed early enough.

This is a screenshot of a Mooji video. I’m almost watching his videos daily, I love him. Look him up!

Melike Kara (b.1985) is an artist who lives in Cologne, Germany. She recently had a solo show at Peres Projects, Berlin and is included in the current group shows 'Surreal' at König Galerie, Berlin (until 24 April, 2016) and 'In Wonderland' at Salon Dahlmann, Berlin (until 14 May, 2016). 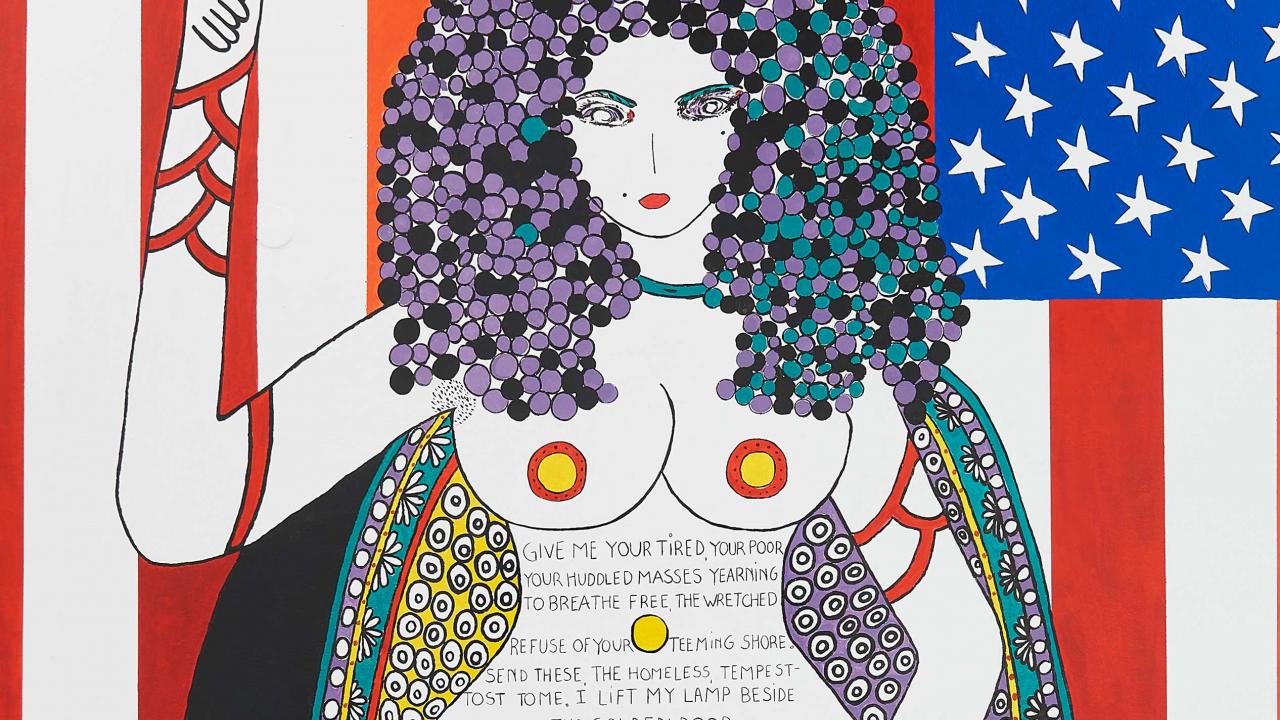