Earlier this year, in February, student-activists at the University of Cape Town (UCT) set fire to 24 artworks, most of them paintings which they had earlier seized from the walls of Cape Town’s premier teaching institution. The artworks, many painted by white grandees influential in giving shape and depth to the city’s art scene in the early 20th-century, were easy targets. The university does not have a dedicated art museum, with work on display throughout its many teaching, administrative and residential buildings. Along with the forthcoming opening of the Zeitz Museum of Contemporary African Art at a harbour-side address, the torching has been a major talking point in the Cape Town art community.

Reporters and pundits were the quickest in responding to the student action, some writing eloquently on the subject, others preferring rickety similes that invoked a default gallery of iconoclasts. Nazis! Isis! The likenesses painted the students as anti-modernists, which, on balance, was a dim reading of a complex scenario. But our general entrapment in the perpetual present tense of news quickly saw debate steered towards other events. The meaning of the torching, which is connected by geography and circumstance to the toppling last year of sculptor Marion Walgate’s ingratiating 1934 bronze study of Cecil John Rhodes at the same university, went largely unparsed.

Two weeks after the campus turmoil I chaired a talk with artist and activist Sue Williamson and political journalist Mark Gevisser. It was ostensibly a PR confab to promote Williamson’s new book, Life and Work, which is authored by Gevisser. Audience members at the Cape Town Art Fair knew this, so I kicked off by asking the two what they thought of the recent events at the university. ‘I think it is a pity when things of value get burnt,’ responded Williamson, who in 1989 published Resistance Art in South Africa, an important survey of practices forged in the cauldron of late apartheid. She has since written two more compilation-style overviews of South African art. ‘I don’t think it is really helpful to burn buildings, busses and paintings in one’s attempt to bring about change,’ she added.

Gevisser, a garrulous and thoughtful public speaker whose publishing credits include a biography of former president Thabo Mbeki, admitted that he found the event ‘deeply troubling’. Much of his puzzlement, he explained, had to do with the difference between ‘symbolic violence’ and ‘real or actual violence’. He thought students had perhaps confused the two registers, but admitted that their strategy of direct action nonetheless had historical precedent: in the 1980s Winnie Mandela offered matchsticks and burning tyres as both symbolic and terrifyingly real weapons for effecting social change.

This reading of events is supported by photographer David Goldblatt, who in March saw a photograph he took of the toppling of the Rhodes statue at UCT vandalized. It occurred during the opening of ‘Echoing Voices from Within’, a student-led exhibition curated by Wandile Kasibe commemorating the formation of the Rhodes Must Fall movement in 2015. Seven members of The Trans Collective, a transgender, gender non-conforming and intersex organisation at UCT, entered the gallery, some naked. Prompted by what they viewed as a ‘gulf in consciousness’ between the exhibition’s organisers and the collective, they painted slogans onto various photos and texts, as well as read a statement.

It was the first time, Goldblatt later told me, that a photograph of his had been vandalized in a storied career extending back to 1963. Apartheid bullies had only ever threatened him with violence, but never acted on it. When I met with the octogenarian Johannesburg photographer he repeatedly spoke of his bewilderment at the lack of public debate around the event. ‘I thought that when these paintings were burnt and photographs vandalised there would be an outcry from the art community,’ he said. ‘Not a fuck! I think it’s highly significant and tragic.’

When I published an article quoting Goldblatt in a local newspaper, some younger artists sighed. I paraphrase: ‘Dude, don’t you read Facebook.’ Actually, no. ‘I don’t do Facebook or tweet, whatever these things are,’ Goldblatt told me, adding that he worried that public discourse has increasingly ‘taken shelter’ in semi-public forums online. Goldblatt’s views might be out of sync with how people now communicate and agitate, but they nonetheless highlight a cleavage in where and how debate is registered in an increasingly ephemeral media landscape. It is consequential not just for activism, but also archiving. How do we record the artist’s voice in an increasingly atomised and fractured landscape of digital retreat?

There is still immense value in human encounter. At least this was one of the things that emerged out of a meeting with Pinky Mayeng, a 23-year-old second-year BFA student at Cape Town’s Michaelis School of Fine Art. ‘I got why they did it,’ she told me in reference to the burning of the paintings at her university. ‘People preach transformation, but you are constantly reminded of how things have not changed.’ Mayeng was referring to both the symbolic order of Cape Town, where various bronze statues of colonial figures (including one of Rhodes in the Company’s Gardens) remain lodged on stone plinths, as well as the still-divided organisation of urban space in this city of 3.7 million. ‘I don’t think the students were clueless about art. Within a revolution certain violence ends up being needed for people to hear you. That is how I understood it.’ 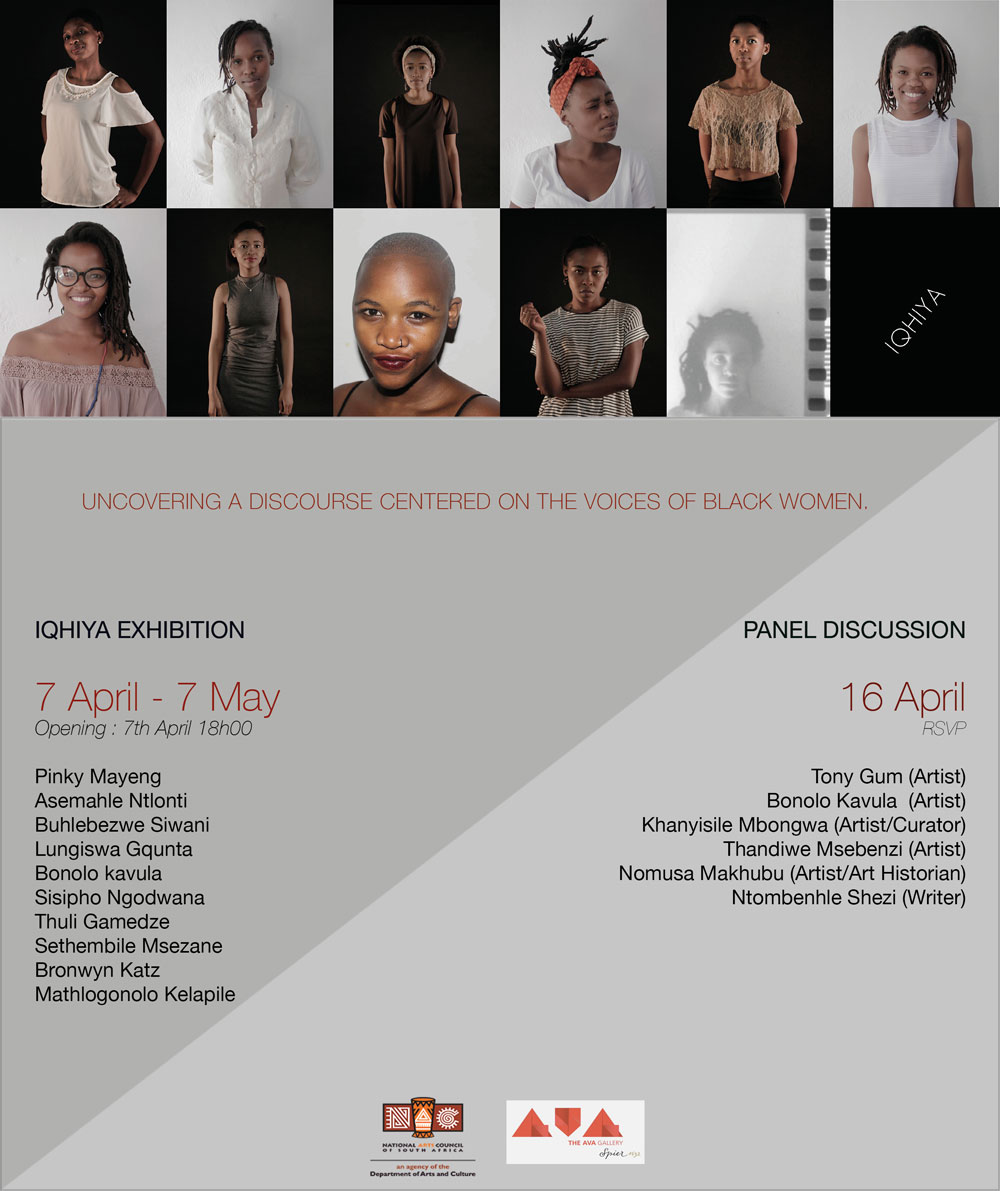 I met up with Mayeng one afternoon at the Association for Visual Arts (AVA), a bellwether institution that has for decades served as a bridge for artists negotiating the gap between studio and a professional career with a retail gallery. The AVA’s importance is compounded by the fact that Cape Town lacks a robust alternative and not-for-profit gallery scene. The Thomas Heatherwick-designed Zeitz MOCAA may be the talk of the town, but it is in humble spaces like the AVA that careers are shaped. It was nearly two months after the ructions on campus. Mayeng and ten other members of iQhiya, a collective of black women artists based in Cape Town, were holding a group exhibition at the AVA. Invisible as individuals, they had found power and a voice as a group.

‘They weren’t burning art but an idea,’ Bonolo Kavula, also 23 and currently doing an MFA in printmaking at Michaelis, told me. ‘They knew exactly what they were doing.’ Mayeng and Botswana-born Matlhogonolo Kelapile, a fourth year BFA student and at 32 the collective’s oldest member, both nodded their heads. Both also likened the torching to performance art. ‘They are not attacking the painting itself,’ explained Kelapile, who exhibited a video of her re-enacting labours (like brick making) once performed by her mother in rural Botswana. ‘It is what is in the painting.’ Kelapile shyly added, ‘I hate to say it, but I think it was a good idea that they did it.’

Nomusa Makhubu, a lens-based artist and curator who teaches at Michaelis, didn’t explicitly declare her position when she introduced the speakers and artists at an evening event forming part of a two-day programme organised by the Institute for Creative Arts (ICA) at UCT. The inaugural ICA event had an urgent theme: the on-going decolonisation of university spaces and curriculums across the country. ‘What was concealed in the everyday is now being made visible,’ observed Makhubu at the start of a thoroughly engaging event that included contributions by editorialist and writer Sisonke Msimang, performance artist Nelisiwe Xaba, who brilliantly spoke with her darting eyes in a solo piece titled Fremde Tänze (Foreign Dances, 2014), and musician Neo Muyanga.

Muyanga’s work-in-progress libretto Revolting Music presented a collection of songs drawn from, among other sources, Brazilian plantations, the King James Bible, Isaiah Shembe’s Nazareth Baptist Church, Soweto and striking miners killed by police in 2012 during a violent strike at the Marikana platinum mine. All the songs were remixed – or as he put it, ‘slightly deconstructed and slightly disturbed’ – partly in an bid to entertain, which we did, but also to highlight a contradiction. ‘The same songs are instrumentalised by wholly incompatible social formations – the rulers, the opposition and the masses who are ruled – as expressions of authentic liberation and/or vehement repulsion,’ offered Muyanga, a sometime collaborator with William Kentridge, in the programme notes.

Even students marching on Pretoria late last year to demand free education had done this, he said. They sang songs of freedom once sung by the increasingly out-of-touch political elite defending the indefensible, mostly old men in suits (once again) whose excuses and shifty footwork are forestalling the inevitable, and unstoppable: generational change. It is redefining Cape Town’s art world, and its ecology of images, too.