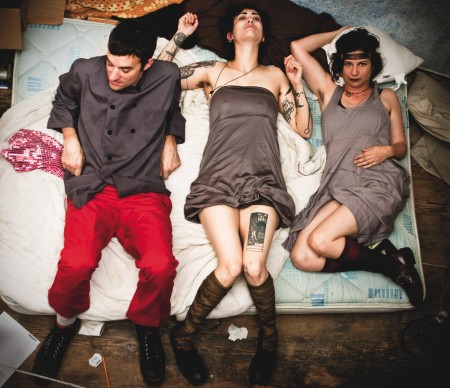 Evangelista was first brought to life by songwriter and composer Carla Bozulich in 2006, with two tracks (‘Evangelista I’ and ‘II’) book-ending an album of the same title. The name seemed almost a character in itself, a prophetic avatar through whom Bozulich channelled her urgent, incendiary noise-blues; it then became the collective name under which she and her band would release Hello, Voyager in 2008, and now its follow-up, Prince Of Truth.

A group of like-minded musicians, shifting around a core trio of Bozulich, bassist Tara Barnes and keyboardist/sound artist Dominic Cramp, Evangelista is not a band in the traditional sense, more a collection of elements drawn together to create a theatre for Bozulich’s songs. The strings, organs, percussion and noise that surround her voice are there to set each song within a discrete setting, whether that’s a burning ship, a murder scene or a holy vision. This textural approach to arrangement is common to much experimental rock music, but when led by a narrator such as Bozulich, deeply powerful, cinematic compositions often emerge.

Like her near-contemporary Michael Gira, Bozulich draws lyrically from an individual set of themes – violence, fantasy, childhood and the cosmos – and explores them without whimsy in a voice that’s at times belligerent, bruised, naive and wise. In bands such as the Geraldine Fibbers and Ethyl Meatplow, and in her solo work, Bozulich has absorbed forms very different from her punk roots – including country music, Baptist sermonizing and film scores – all of which feed into Evangelista. While the contrasts between clanging noise-rock, heartfelt balladry and sparse jazz swing that characterized Hello, Voyager was bold, one of Prince Of Truth’s achievements is its consistency: rather than traversing many terrains, it defines its own.

Perhaps the album’s unusual genesis is a factor: Bozulich was laid up with pneumonia during most of the recording sessions in Montreal and, on her recovery, pieced the album from these recordings together with Barnes and Cramp, adding vocals along with guitar from long-time collaborator Nels Cline. The backing musicians – including sublime chamber strings from members of A Silver Mt Zion and Godspeed You! Black Emperor, and impressive drumming from Ches Smith – create a strong, sprawling and free jazz-inflected base for the subsequent tight editing and weaving in of noise amongst the songs.

From the lullaby-like ‘Tremble Dragonfly’ to the ragged, yowling ‘You Are a Jaguar’, Bozulich’s trademark contrasts between strength and vulnerability are all in place, but she also inhabits a sinuous, psychedelic persona for ‘Iris Didn’t Spell’ and ‘Crack Teeth’, both reminiscent of Brigitte Fontaine and Art Ensemble of Chicago’s 1970s collaborations. Lyrically, too, Bozulich seems more assured than ever. The album’s closer, ‘On The Captain’s Side’, features a simple backing of accordion and softly blustering noise, over which she and cellist Jessica Catron intone a solemn, visceral fantasy of war and defeat. ‘Our hunger and menace will never subside’, they proclaim, ‘and we aim our cannons at our own deck.’ From the grain in her voice and the knotty strength of her syntax, we know that Bozulich inhabits these worlds she creates both fiercely and honestly – with Prince Of Truth, more than ever, we’re able to follow her there.