In the world of high criticism, rock music and contemporary art could not be more opposed. Art is taught to be discursive, intellectual and historical, whereas rock is most often described as experiential, fleeting, and commercially populist (fandom merely a purchase away). It is rare, but becoming less so, for art and rock to be held to the same standards. If taste and tendency were once largely rebuked as forms of critical judgement in art, we still 'like' a group and still cling to attitudes and fashions when it comes to the music we listen to or buy. These kinds of reductions are useful, however, only insofar as we get to watch them fall apart. No matter how illusory or spectacular, rock's attitude is always a product of context (just as art's intellectualism is always susceptible to faddishness). Indeed, the best pop or rock groups are distributors of contexts as much as styles, the two being separable even if they are not separate.

The self-styled 'collective' Sonic Youth has given rock a direct connection to a set of ideas and looks that the form rarely desires, much less achieves. How many kids in the suburbs first heard the names Mike Kelley, Gerhard Richter, Rita Ackermann, or Dan Graham by reading the liner notes to Sonic Youth albums? How many curators, wanting to add something of rock's attitude to a museum show, have called on the band's distorted guitars and noir-ish postures? Questions to cringe at, perhaps, but significant ones, nonetheless. Sonic Youth wears its affiliation to art on its sleeves. For 20 years, the group has 'collaborated' with artists, played in art-punk clubs, museums, and galleries, written in art magazines (Kim Gordon, especially, has at times positioned herself as a critic), and, most fundamentally, been ubiquitous in New York's downtown scene. It is a romanticism that seems no longer quantifiable, but which in the early 1980s meant art as readily as it meant rock.

Sonic Youth's aesthetic was brilliantly chronicled in the show 'Sonic Matters, Sonic Kollaborations', which was organised by curator Todd Alden, Sonic Youth, and the art bookshop Printed Matter. Compiling album covers, videos, book projects, writings by band members, concert posters, and other ephemera, the exhibition was a testament to Sonic Youth's sustained commitment to the art scene it came from. Maybe more importantly, though, 'Sonic Matters' says something about how rock and art, with their distinct communities and motivations, can and have intermingled in recent years.

However, do such collaborations, most visibly in the form of album covers and music videos, add anything to Sonic Youth's music? Does Sonic Youth's music add anything to the art? In a way, 'collaboration' doesn't really seem like the right word, except when artists have played with the band (as Mike Kelley has done on occasion) or produced videos for them (as Judith Barry, Raymond Pettibon, and Richard Kern have done). The band's album Sister (1987) featured fragments of images from Dan Graham's Homes for America (1966) photo project, and, in turn, Graham has written about the group and was one of their earliest supporters (he was even the first person to suggest to Gordon that she play music). But these kinds of involvements seem more like friends helping friends than collaborations on the level of practice. Thurston Moore put it succinctly in his introduction to the show's catalogue: 'we were an art rock band parlaying with artists'. If there's any way to substantiate the collaborations between Sonic Youth and artists, maybe it's just this: they've been talking for a long time.

In an essay for Elisabeth Sussman's book on Mike Kelley, Catholic Tastes (1993), Kim Gordon writes 'rock music is all about repression'. How true: historically rock has been teenage music derived from black Rhythm and Blues. Its subjects have been forbidden love, fast cars, dark streets, and acting out: symbolic affronts to repression, to grown-ups, to sobriety, to the Law. Sonic Youth, as much as the Velvet Underground before them, have made themselves in the image of resistance to (or flaunting of), ideology. They write songs about experiences over-mediated by classic Americana: power, politics, sexism, violence, TV, and Hollywood. Through the work of artists Sonic Youth has perhaps found a way to symbolise or abstract the themes of rock in new ways. By bringing a more nuanced aesthetics of ideas to the gloomy basement or the beer-stained punk club, the band have made 'art' a more popular style of refusal. Rock's agitations will never look the same. 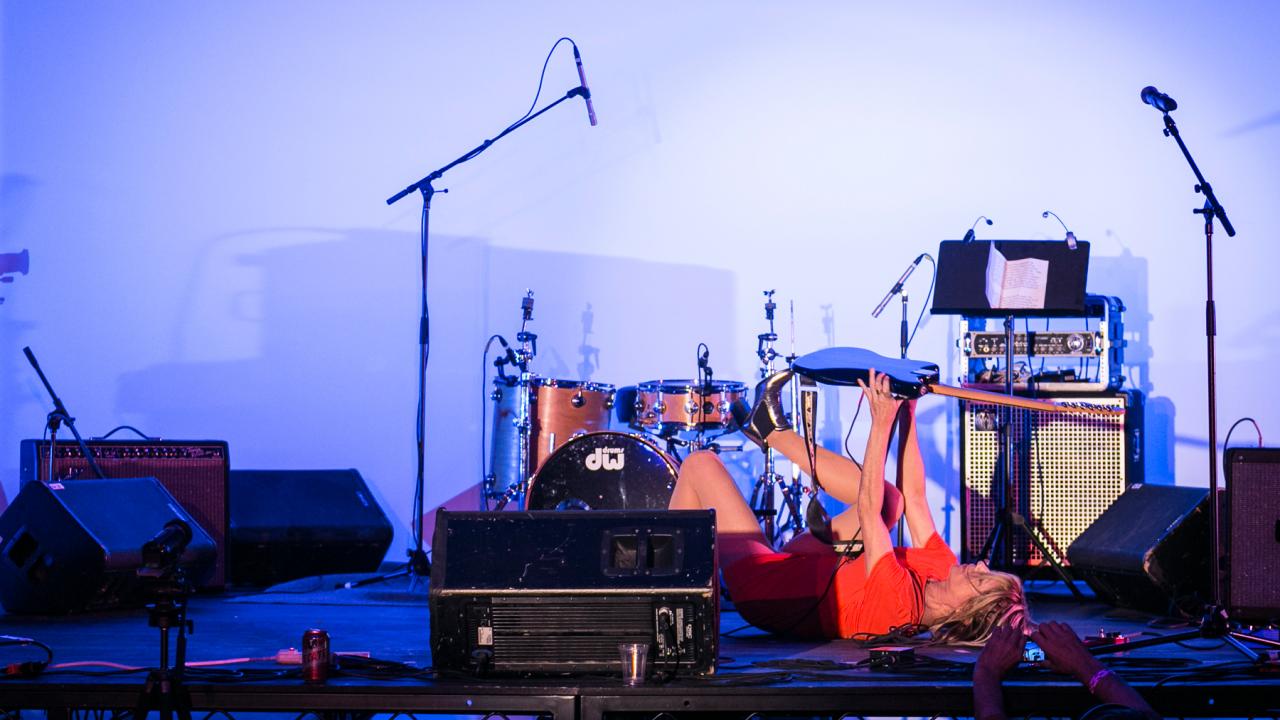 Reviews
Behind the Scenes of Colombia’s Street Parties