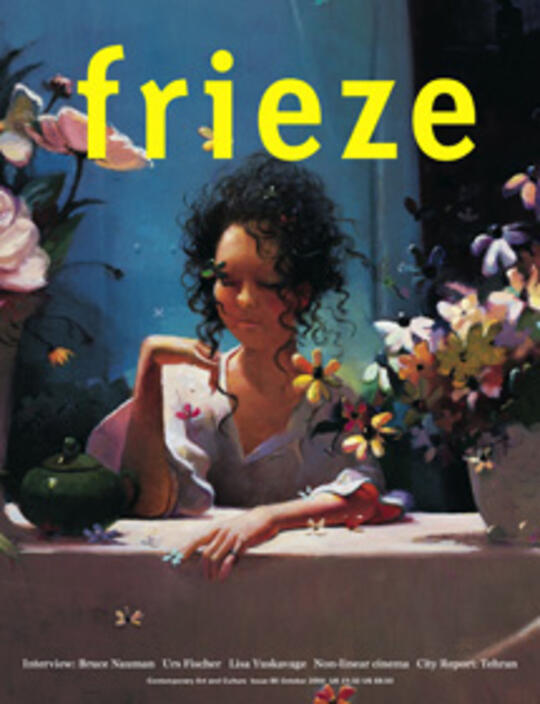 In 1968 Sture Johannesson’s poster for a planned exhibition at Lunds Konsthall upset the Board of Directors so much they ordered all copies to be confiscated and destroyed. The show was cancelled, the Director resigned and an artists’ boycott kept the Konsthall closed for months. Now, after 36 years of internal exile from the mainstream Swedish art world, Johannesson has returned to the scene of the crime with Counterclockwise Circumambulation – both a retrospective and a première.

In the first room were the 11 posters of ‘The Danish Collection’, printed in Copenhagen between 1967 and 1969. Some were made to advertise exhibitions – notably Palle Nielsen’s Model for a Qualitative Society (1968) at the Moderna Museet – but all have the same underlying subject and sensibility. In contrast to the typical psychedelic art of the period, which took its cues from Art Nouveau and 19th-century handbills, Johannesson’s work combines a typographic, collage style inspired by John Heartfield and Hannah Hoch with the clarity and impact of commercial publicity. Turning on and tuning in doesn’t mean dropping out but stepping into the future, and the posters are invitations to engage with the business of changing society. Turn On the Institutions (1967) is the message, with a proposal to fix a sign on the roof of the Royal Palace in Stockholm that reads ‘The Kingdom is within You’. We are encouraged to bring about an Art Crisis (1968) for ‘art’s monetary system’, with free exchange made possible because ‘art is easy’. Art is not only something that everybody can do but, in the new world being offered, it’s an intrinsic condition. In Johannesson’s entry for an architectural competition to design a new Copenhagen planetarium the necessary technical precision is accompanied by kaleidoscopic graphic invention, the meticulous plans and cross-sections of the proposed building lit up with dense, Op art detail.

By the time the psychedelic aesthetic went mainstream Johannesson had moved on, but the subject, and objectives, remained similar. Working with programmer Sten Kallin, he began exploring digital technology. The second room of the Konsthall was lined with a series of computer-generated drawings from 1973, their broken symmetries and hypnotic, alien-life-form geometries derived from an attempt to find the equation whose graphical solution is the outline of a cannabis leaf. Another work from the same period, Off Line, is a neat, spirographic figure that suddenly sprouts a two-metre-long angled line as the pen-plotter responds to a glitch in the mathematics, a crack in the system.

Johannesson’s digital experiments continued through the 1970s and 1980s, with the founding of the ‘Digital Theatre’, an art collective powered by a DIY network of first-generation Apple microcomputers, and the EPICS project (Exploring PICture Space), another collaboration with Sten Kallin. The EPICS images on show were large-format prints of esoteric symbols whose outlines melt and morph into multicoloured fractal-like fields reminiscent of electrophotography or video feedback. As the only works here made with the formal history of modern art as their explicit subject – they were accompanied by quotations from artists, from Wassily Kandinsky to Sol LeWitt, who used pre-digital ‘systems aesthetics’ – they sat the happiest in the Konsthall’s Modernist space. In the 20 years since the project began, however, the genre art of cyber-psychedelia has grown up and retrospectively claimed their aesthetic.

The majority of the works were not produced to be hung in neat rows on white walls but are the result of a practice of artistic, technological and chemical experimentation that has been integral to Johannesson’s daily life – a practice enabled by the discourse of radical social politics that emerged in the 1960s but that went on to constitute part of the discourse in following years. Two scenes from this wider history are replayed here: the first is an interview recorded with Johnny Rotten in 1977 – ‘I hate art,’ Rotten says, ‘it’s too institutionalized’ – while the second revolves around the death of Ulrike Meinhof. Johannesson was involved in organizing a show dedicated to Meinhof at KulturHuset, Stockholm, in 1976, which was closed down almost immediately – the irony being that the project was intended to highlight new West German censorship laws. In Lund an image of Meinhof’s grave hung in a darkened space to be viewed through a hole cut in the wall, a melodramatic staging that nonetheless suggested the social and political space that art, under museum conditions, cannot enter. A framed placard, salvaged after Meinhof’s funeral, read ‘Freiheit ist nur möglich im Kampf um Befreiung’ (‘Freedom is only possible in the struggle for liberation’).

The show concluded with works made at the Cannabis Gallery in Malmö, a space started by Johannesson and his partner Ann-Charlotte in 1965 that functioned as a meeting point and production house for the self-styled underground. Two large collaborative drawings, both titled Agent Knallrup med rätt att knuffas (Agent Browbeat – Licensed to Push and Shove) (1966–7), are giant psychedelic comic books, the narrative not sequenced or framed but bursting out all over the place and collapsing into tripped-out zones of convoluted pattern. Now and then the hapless agents of the local police appear, always too late and left out of the party. A film made around the same time shows Johannesson as a model citizen, looking after his new-born child, working studiously on his drawings, drinking tea with friends and reading newspaper reports of his scandalous activities.

The Counterclockwise Circumambulation of the show’s title made visitors aware both of their own participation and of the time that has elapsed since the controversy over the Hashflicka (Hash Girl) (1968). The poster – a bright pink naked woman holding a long-stem pipe with Eugene Delacroix’s Liberty Leading the People (1830) floating somewhere over her left shoulder – hangs undisturbed near the entrance. It recently turned up in Lukas Moodysson’s film Tillsammans (Together, 2000) and in the Ikea catalogue, and UK teen-girl outfitter Top Shop even bootlegged the hand-lettered slogan – ‘Revolution means revolutionary consciousness’ – for a T-shirt design. As Johannesson writes in the catalogue, ‘at first they didn’t want it all, now it seems they can’t get rid of it’. A lot has changed in 36 years.

Right on cue, however, as if eager to prove that time does indeed run in circles, the local police raided the exhibition and cut down the few dozen legal industrial hemp plants growing in terracotta pots in the Konsthall’s courtyard. Once again a gentle provocation draws a disproportionate response; once again the authorities withdraw, looking slightly foolish, the exact limits of a specific freedom disclosed. It’s an old game, but it’s far from over.