The Trick Mirror of Reinhard Mucha

Born in 1950, Reinhard Mucha has spent most of his life in his native Düsseldorf, an epicentre of Germany’s postwar economic boom – the so-called Wirtschaftswunder or ‘Miracle on the Rhine’. In his youth, he witnessed the city’s rapid reconstruction from a bombed-out ruin to a beacon of West German art, culture and glamour that would give rise to Kraftwerk and Claudia Schiffer. This September, the Kunstsammlung Nordrhein-Westfalen will jumpstart a contemporary reappraisal of Mucha by mounting the largest exhibition of his work to date, spanning both the K20 and K21 in the artist’s hometown. As art historian Walter Grasskamp noted in his 2017 book on Hans Mayer, it was a city where the wealth extracted from the industrial Ruhr region was transfigured into the majestic steel and glass of big banks and department stores. From the dust and smoke of blast furnaces, it birthed gleaming metals, immaculate displays, dazzling lights. The whole city effectively became a trick mirror in which industrial capital could contemplate a purified vision of itself.

Despite his own middle-class upbringing, Mucha trained as a metalsmith before fully devoting himself to the field of art. And throughout his career, he maintained a keen sense of solidarity, if not identification, with industrial labour. His catalogue contribution for the group exhibition ‘Kunst ’80 – 2. I. B. K.’ (1980), for example, was simply an advertising spread. To the right: a blurry snapshot of blonde baby Mucha playing with his toy trains. To the left: a stark technical diagram advertising a locomotive coaling system. Meanwhile, the cheeky title of his later wall piece The Wirtschaftswunder, To the People of Pittsburgh III (1991) suggests he was also well attentive to the bleak prospects facing factory workers in the de-industrializing West. Whether cause or effect, this affinity went hand in hand with an ambivalence towards the habitus of a middle class that sought to distance itself from the industrial labour upon which it rested. Such scepticism was formulated early on in works like Kopfdiktate (Head Dictation, 1980), which comprised a series of 30 photographs of the artist taken during the course of his life. Each image is framed alongside a sheet of punitive lines – ‘I must keep quiet,’ ‘I must clean up after myself’ – that the young Mucha was made to transcribe ad nauseum in school. Originally conceived for a show in the stairwell of Galerie Annelie Brusten, housed in a Jugendstil villa in Wuppertal, the installation at once reads as a parody of the virtues associated with upward mobility as well as an ironic commentary on his own position as an artist inhabiting this upper-class architecture – as if to say: that unruly boy made it after all.

His ambivalence towards middle-class mores found a clear formal analogue in a practice dedicated to deconstructing the display techniques of museums – those privileged sites of bourgeois self-reflection. In this sense, much of his work resonates with the early history of conceptual art and institutional critique: be it the museum wall cut-outs in Stockholmer Raum (Stockholm Room, 1998) or the overwhelming array of archival ephemera in Frankfurter Block (2012). But these formal similarities also belie deeper differences. In the 1960s, Anglo-American Conceptualists and Minimalists alike started outsourcing production wholesale in order to eschew any trace of the artist’s hand – albeit for vastly different reasons. Nevertheless, what artists as disparate as Lawrence Weiner and Donald Judd shared was a desire to consign the ideal of artist as craftsperson to the trash heap of history. And in the process, they inadvertently heralded the rise of the artist as a kind of service provider in the information economy. Given his background, it’s hardly surprising that Mucha would prefer to fabricate his works himself, and in a sense his propensity for material excess is also a way of renegotiating this historical precedent. At first glance, many of his wall-mounted vitrines seem like sleek, geometric compositions rendered from industrial materials. But, when viewed from the side, they tend to reveal the cumbersome, labour-intensive substructures holding them together. Against the twin tides of deskilling and dematerialization, he insists that the seamless surfaces of cultural reflection are always underwritten by an elaborate system of manual work – with matter as its witness.

This tension between the surface of art and its underlying logistics came to a head in the expansive installation Wartesaal (Waiting Room, 1979–82), which was exhibited at Documenta 10 in 1997. One of Mucha’s best-known works, it revolved around an arrangement of 11 large filing cabinets, each with 22 individually labelled shelves, which contained a total of 242 hand-made replicas of train-station signs from German cities with six-letter names. Yet, for the most part, visitors to Documenta were unable to access the individual signs and had to make do with grimy train station debris enshrined as ethnographic finds in the surrounding vitrines. The installation-cum-depot imparts a sense of inertia and frustration akin to the experience of navigating the labyrinths of German bureaucracy. And although the work was rightfully read as a jab at museums as a whole, the ordinarily tight-lipped artist suggested a different intention in the publication Zossen: Ein Ausflug (Zossen: A Trip, 2018) by including a quote from the entry on railroads in Pierer’s Universal–Lexikon (1846): ‘This tremendous means of communication is like an infant Hercules who will one day free people from the suffering of war and famine, who will fertilize their fields, eradicate national hatred and unemployment, and revive the workshops of the people. It has already achieved the most incredible things since its short period of influence and taken up the struggle against ignorance and brutality.’ This vision of prosperity was certainly borne out over the course of Mucha’s lifetime. Though in light of the Nazis’ later atrocities, the notion that trains would free us from war and famine feels tragically naive. Disconcerting, then, to recall that the same technological ingenuity enabled both.

Despite being one of the most prominent German artists of his generation, Mucha has receded from the limelight in recent years. Much of the difficulty in reading him from the present probably lies in how much his materials are anchored in the everyday life of a bygone era. The Stragula and Balatum (bitumen-coated felt) flooring that inhabits his sculptures, for instance, was synonymous with mass-market, mid-20th-century interiors, while the delicate aluminium profiles that punctuate their surfaces once adorned every modernist storefront and office partition. Nevertheless, what remains is a conflicted image of social progress from a time and place that was eager to embrace the future while running from its past. When I recently spoke with the Kunstsammlung’s curator Falk Wolf, he suggested that one way of approaching Mucha’s practice is through the figure of a ‘futile movement that only circles in on itself’ – certainly an apt description of the monumental carousels of modernist office furniture in installations like Kasse beim Fahrer (Buy Ticket from Driver, 1987). But looking back, this vision of progress at a standstill also feels more topical than ever. In the decades since Mucha’s youth, it has become increasingly clear that there are ecological limits to economic growth, meanwhile war has simply become a matter of everyday business. For all the future profits that the cult of innovation may yet bring, only historical reflection helps us see through to its real costs.

This article first appeared in frieze issue 229 with the headline ‘Trick Mirror’.

Stanton Taylor is an artist, writer and translator based in Berlin. 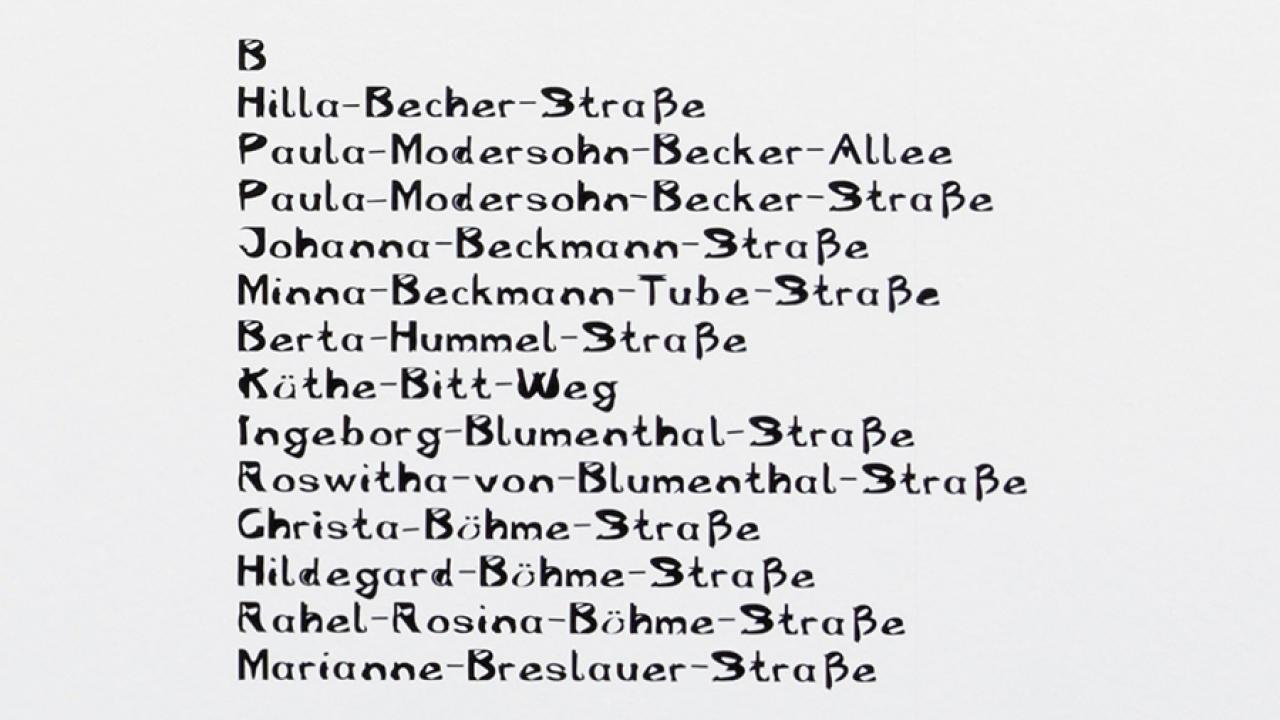