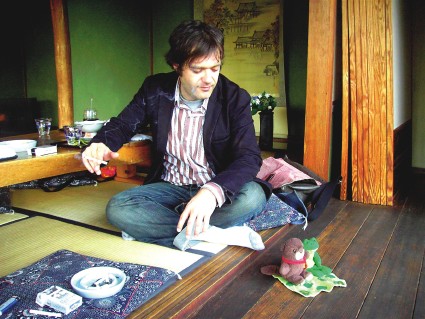 Moments into Jim O’Rourke’s first album in eight years and it feels like the listener is being given a rather petulant lesson in dynamics. A bucolic acoustic guitar melody begins, but almost immediately tails off. It begins again, a lush orchestral arrangement swells, then suddenly drops out altogether, leaving a few seconds of silence in its wake.

O’Rourke, whose new release is a single, 38-minute instrumental piece, trades in such gentle hues that it’s easy to overlook just how sophisticated – at times icily so – his music can be. He has been a member of Sonic Youth and scored films, including Werner Herzog’s Grizzly Man (2005), but is probably best known for a trio of solo albums released on the Drag City label. Bad Timing (1997), Eureka (1999) and Insignificance (2001) combined a sift through the history of American pop and rock with a sense of form that resembled contemporary classical composition as much as it did pop music.

O’Rourke has an almost obsessive attachment to context – this latest album has been withheld from release on MP3 at the artist’s insistence and bears the instruction ‘please listen on speakers, loud’ – which is, I think, unnecessarily defensive: like a skinny man layering his clothes to bulk up, it distracts from the thing itself. The Visitor picks up where that trio left off. Its many different parts were all recorded by O’Rourke himself, in single takes, at his home studio in Tokyo, where he has lived for much of this decade after relocating from New York. With guitar as its axis, the piece rushes through a series of melodies – any one of which a lesser songwriter would kill for – that are arranged in disparate ways: strident marching patterns, with banjo and snare drum; louche, jazzy piano interludes; cheesy 1970s soft-rock guitar licks.

Yet every time you think the music has settled into a groove, it is knocked off course by a new theme. The speed and casualness with which ideas are picked up and discarded raises the question: is O’Rourke trying to dazzle us with his genius? Fortunately it’s much more than that. To find The Visitor’s emotional core, you need to look not to the melodies, but to what surrounds them. As it progresses, the background accompaniment begins to break loose and sketch out new shapes – at first with some drawn-out woodwind chords, then a gentle surge of feedback and a few discordant guitar notes, then a haunting piano pattern. By the end, the piece has been so overwhelmed by atmospherics that it simply slips away, in a melancholy ostinato.

Despite its wealth of ideas, what we’re left with at the end of The Visitor is a feeling of emptiness. Given that the album is so carefully produced, this seems to be deliberate. O’Rourke has often projected an outsider persona onto his music, whether it’s in his wry lyrics (when there are any), or in the paintings of podgy, perverted men that adorned the covers of Eureka and Insignificance. What makes this album so intriguing is that here he achieves that effect without vocals. He has created a language that is entirely his own – often from musical elements you’d think had been bled dry of any meaning – and for that we can indulge the occasional moment of archness.