[member:membership-name]
[member:full-name]
VIEW MY DASHBOARD
BY Christian Haye in Critic's Guides | 05 MAY 01

Waiting in the Wings

Reading between the subtitles of the Oscar nominations 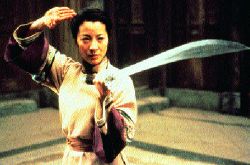 I've seen Crouching Tiger, Hidden Dragon five times. My mania has extended to incredulity verging on pomposity directed towards those who haven't seen it yet. I listen to pop albums I like the same way: to death. Of course there are much better films in the universe right now (In the Mood for Love is one). But I know I won't watch them with the obsession I've reserved for Crouching Tiger, Hidden Dragon.

Popular culture is a drug that works its wicked ways on me the way a sale triggers glazed looks in those addicted to shopping. Crouching Tiger, Hidden Dragon is not even a great film for its genre. Chow Yun-Fat does look silly with Green Destiny. There aren't nearly enough fight scenes to rival classics of the genre and the dual love stories are so thinly developed they become tepid bookmarks to the action. The lack of blood also signals the fact that this isn't a Hong Kong film but an American one. Ang Lee makes excellent genre films without making exceptional ones. Case in point: The Ice Storm, brilliant as it was, just wasn't Happiness. To illustrate how warped the Oscars are, both these films not only predated but were infinitely better than American Beauty.

Traffic, the Steven Soderburgh opus, is an overly moralizing tale of the drug trade that signifies it's Americanness with three USA truisms: Mexicans are bad and must die, WASP American girls have truly hit bottom when they're being fucked by mandingos, and to make a good film just copy the style of a great director. In this case the new cinema that Hollywood seems mystified by is a direct result of film students' determination to be Robert Altman. If you'll find it in your heart to forgive this sentence: Traffic does have its high points. Ensemble films generally allow a cadre of actors to display their acting chops without all of that messy character development that the new Altman-style cinema seems to discourage. Also, let's face the facts: handheld cameras just look cool. In one of the best scenes the lily-white, tragic, ruling-class youth babble nonsense while one of their brood collapses from an overdose; a fitting metaphor for the Academy Award nomination process in general.

The fact that these films (along with Gladiator) have been nominated for the bulk of the Academy Awards doesn't signify much because the Oscars are their own genre and routinely (and mercifully) ignore importance. However, the Academy's self-congratulatory remarks about diversity are important. The fact that Crouching Tiger, Hidden Dragon is in Mandarin and a third of Traffic is in Spanish is a flag that the American popular culture machine may be ready to move from its xenophobic past. Although the dry, mundane nature of the Academy of Motion Picture Arts and Sciences as an institution isn't likely to change, I would like to suggest an Oscar for worst Mexican accent of the year: it should go to Benecio del Toro. While Sean Penn's mangled speech in Before Night Falls was infinitely worse, cameos are mere footnotes to the stuff of which dreams are made.