A report from this weekend's Women's March on Washington D.C.

In foggy Takoma Park, Maryland, just across the D.C. border, the sidewalks were dotted with pink hats and handmade signs. They streamed down to Takoma station where all the subway cars were also packed with pink. A bracing, high-pitched roar greeted each train’s arrival. The sound, which coursed through the crowd at random intervals throughout the day, was unlike any rallying cry I had heard before. The volume and pitch were easy to explain: it was the sound of one million women – and yes, some men. But the emotional register was harder to pinpoint. Anger and excitement released in a way as impressive and complex as the Women’s March itself, which was replicated at the same time in some 600 cities across the globe.

A group of New York artists called We Make America was gathering at St. Mark’s Episcopal Church. Taking the Statue of Liberty as their protest motif, the group had made hundreds of cardboard torches and crowns in double, so their sisters in New York could march with matching objects.  Many in the group donned green tunics as well, with sashes that read ‘Miss Represented’ and ‘Miss Led.’ Rebecca Baldwin, an MFA student at Hunter College in Manhattan’s Upper East Side, had painted Lady Liberty’s invitation – ‘Give me your tired, your poor, your huddled masses’ – in concentric circles on a 25-foot parachute, ‘so they can see it from the helicopters.’ As Nina Yankowitz, a New Media artist who had marched on Washington in the ‘60s, told me, ‘We have to rattle his cage.’ 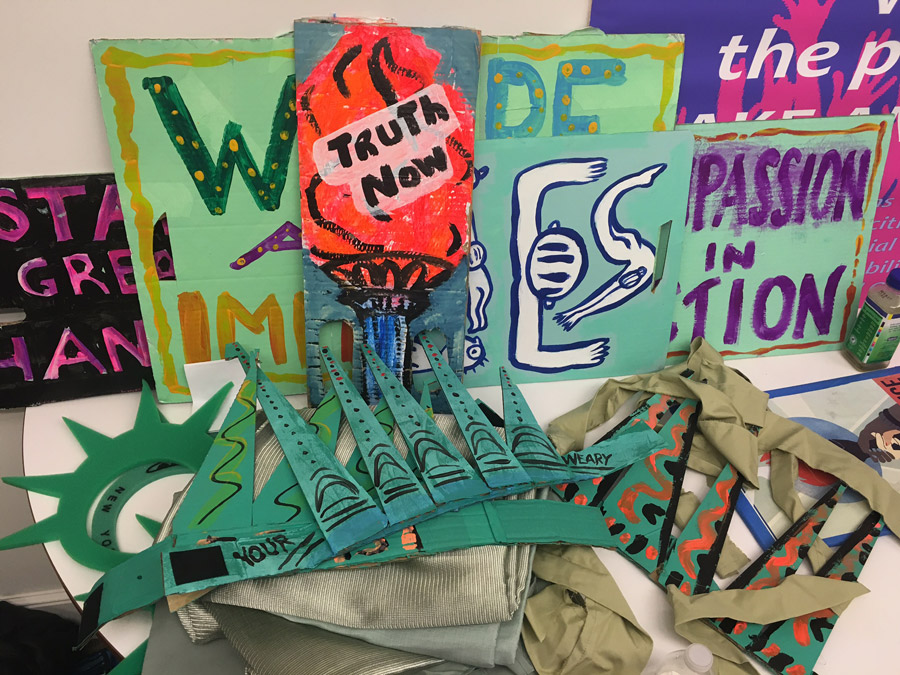 I had intended to focus this report on artists, but as we approached the larger gathering, the sheer numbers of hats and signs reminded me how occasions like these make artists of everyone. If the cumulative numbers meant that this was the largest mass protest in United States history, then the ‘pussy‘ hats represented the largest mass crafting effort as well. My wife had been given hers at Baltimore airport by a woman who had flown in from California with a suitcase full of knitted offerings from women who couldn’t attend the march themselves. Made in the USA, their range of hues and textures – from fluorescent to mauve, from knotty to glittery – formed an effective counterpoint to Inauguration Day’s monotonous red caps, many of which turned out to be made in Vietnam, Bangladesh, and China. 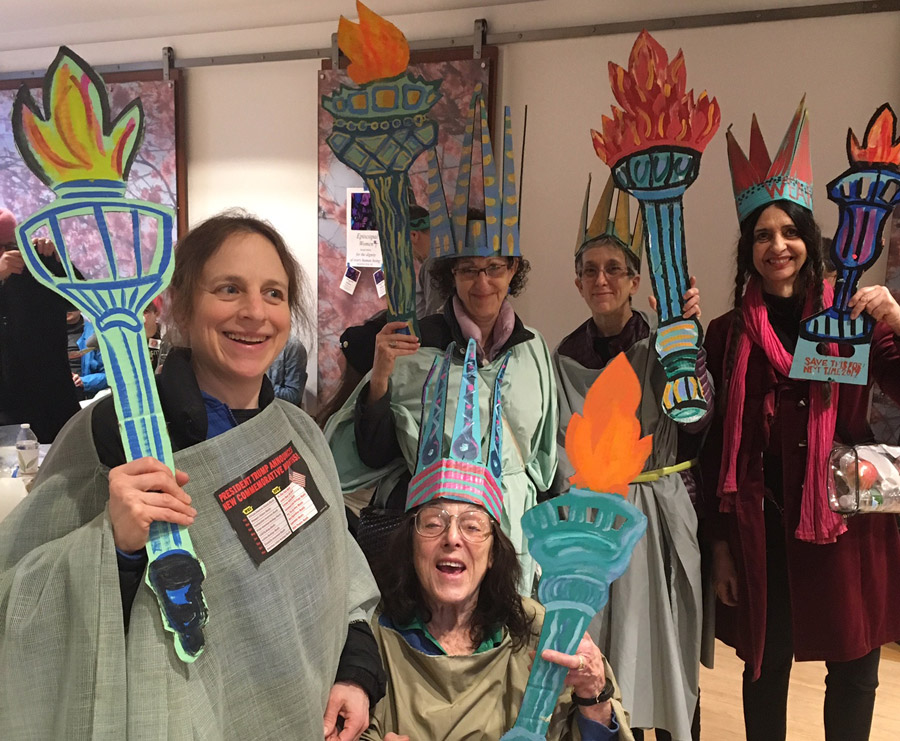 The signs, too, represented a massive creative outpouring. The local drug store ran out of posterboard, and everything from the wild scribbles of children to the professionally printed Shepard Fairey posters could be seen floating above the crowd, with written messages in English, Spanish, and, of course, Russian. Some of the most visually ambitious signs involved renderings of Trump paired with Putin in various submissive roles: on Putin’s knee as a puppet, on his own knees, shirtless on horseback, and so on.  Other images focused on the President’s colouration, depicting him merely as a Cheeto crisp or taking the ‘peach’ from impeach as a visual cue. Toupees and tiny hands were also abundant. Sculptures floated and bobbed above the crowd – the requisite papier-mâché Trump head, a body-sized knitted female reproductive system, a big pink cat paw, also knitted, and a giant foam tampon soaked dark red. 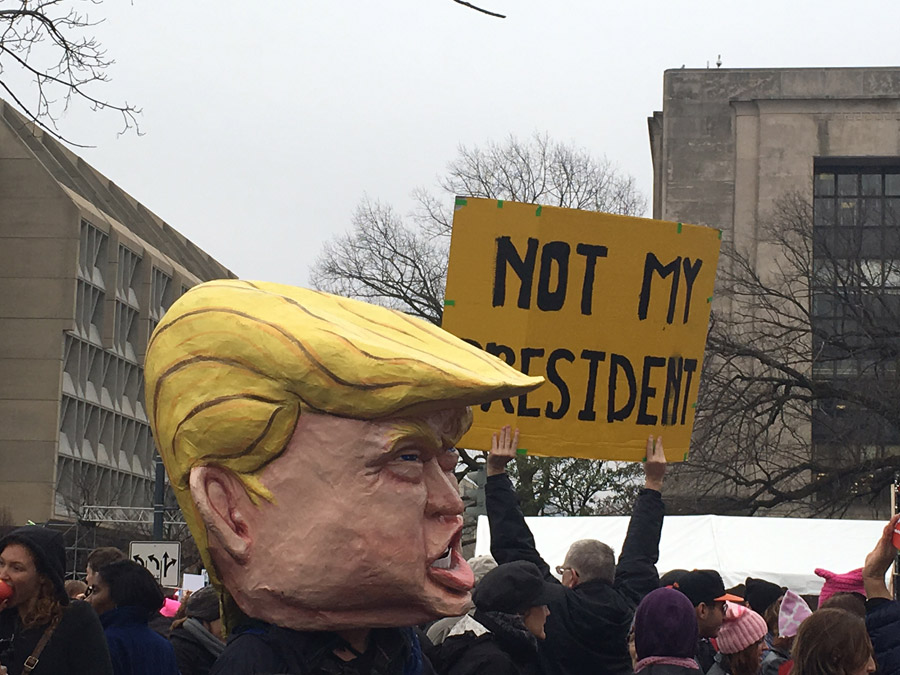 I knew of many other artists in attendance – four buses from Chicago, organized by Claire Ashley, a group of graduate students from Cranbrook Academy in Michigan, another bus from the Photography Department at the School of Visual Arts in New York, the list went on and on – but in the crowd it was very hard to move, much less meet up. Annie Godfrey Larmon, an art writer who came on a bus chartered by Allyson Viera and Lumi Tan, said her trip was well organized but her group ‘became atomized’ as they entered the main body of the crowd. Still, Larmon told me ‘everyone felt so empowered.’ She was ‘floored’ in particular when Janelle Monáe invited African-American mothers, whose children had been killed by police, on stage to recite their names – Jordan Davis, Eric Garner, Trayvon Martin, Dontre Hamilton, Mya Hall – in a moving call and response with the crowd. Similarly recalling those who were absent, Larmon told me she was marching for her friends who couldn’t be there – either for economic reasons or because they were worried their safety or immigration status would be threatened by participating. 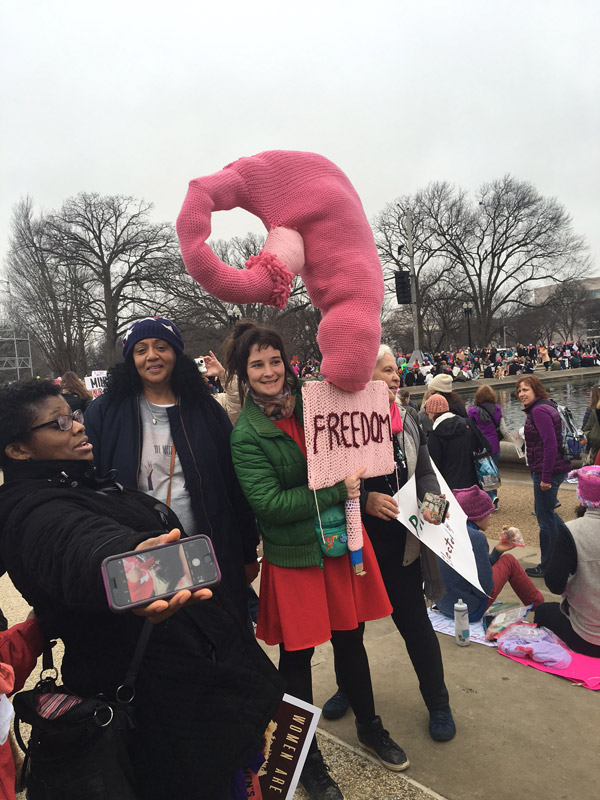 The official march was meant to start at Independence Ave. and 3rd Street SW and head along Independence Ave to the intersection of 15th and Pennsylvania Ave, but due to the numbers of people (D.C. police put the count at more than one million), the stage announcer told us that the route we were meant to take was already packed, start to finish. Rumours circulated that our numbers overwhelmed the organizers’ plans, meaning we wouldn’t be able to march at all. Texts were slow to send and receive, but eventually we got word, mostly via hand signals flashed above the crowd that we would fan out on alternate routes. Our group was told to go back along Constitution Ave, but we somehow overshot and ended up on Pennsylvania Ave. Would we end up at the White House? The idea excited the crowd. 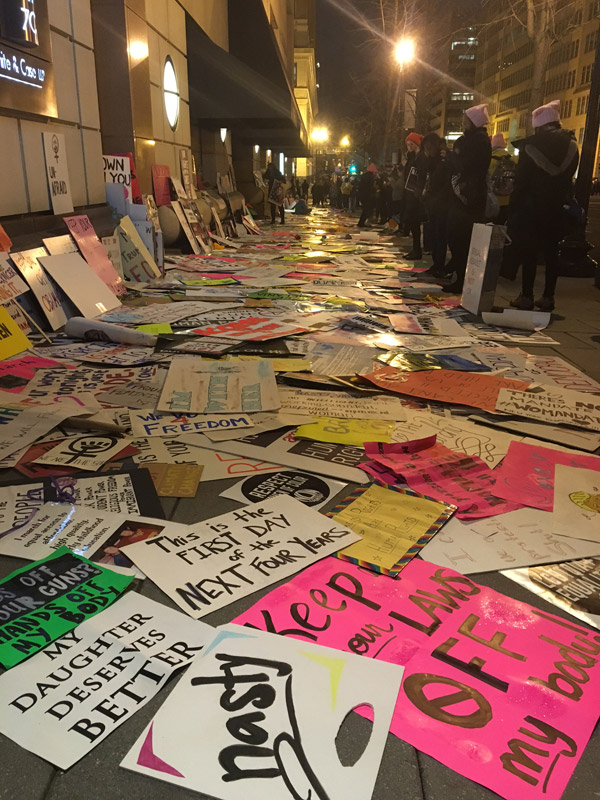 All along the route, we were greeted by cheering masses sat in the inauguration’s leftover bleachers or stood on balconies and rooftops.  At the Newseum, whose façade features a huge stone engraving of the First Amendment, a group pumping their fists was gathered above a banner welcoming President Trump.  At first, the chant was ‘Freedom of speech/Freedom of speech’ but it morphed pretty quickly into ‘Do your job/do your job.’ People started talking about passing ‘the President’s hotel,’ which I thought was a sly joke on the Trumps’ plan to inhabit the White House only part-time. But as we approached the heavily guarded Trump International Hotel, I remembered just how literal these things now were. ‘Tax Returns/Tax Returns’ was the natural retort, followed by a somewhat unsettling reprise of  ‘Shame! Shame!’, a chant taken from Game of Thrones. 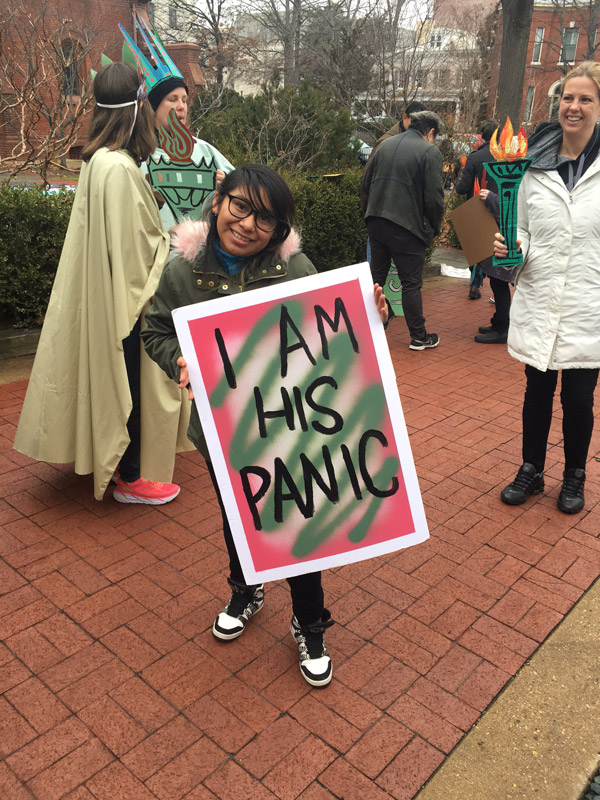 In the end, the official march route didn’t end up at the White House, but thousands upon thousands of the signs ended up there, often overwhelming the surrounding fencing. There were also impressive sign arrangements on the sidewalks leading away from the official route, and at the various train stations nearby. The Chicago Public Library had requested protest objects for their archive, and I’m sure many will end up being preserved, but their vast quantities mean that most will survive only in the countless photographs that are now being shared on social media. (My personal favorite, I AM HIS PANIC, is now my profile picture.)

Speaking with various artists the day after the march, fear and questions about how best to move forward were mixed with a palpable sense of exhilaration and relief that something big, and very visible had already been done. Lisa Wainwright, Dean of Faculty at the School of the Art Institute of Chicago, the country’s largest art school, put it this way: ‘I signed up for a major performance piece and that felt good. We work in the symbolic register, and to march is a symbolic act. I want to keep sending these images out.’

Dushko Petrovich is a Chicago-based artist, writer, and editor who is currently program director of New Arts Journalism at the School of the Art Institute of Chicago. He is a co-founder of Paper Monument and chaired the n+1 Foundation’s board of directors from 2013 to 2015. His latest project, The Daily Gentrifier, will debut in the Spring. 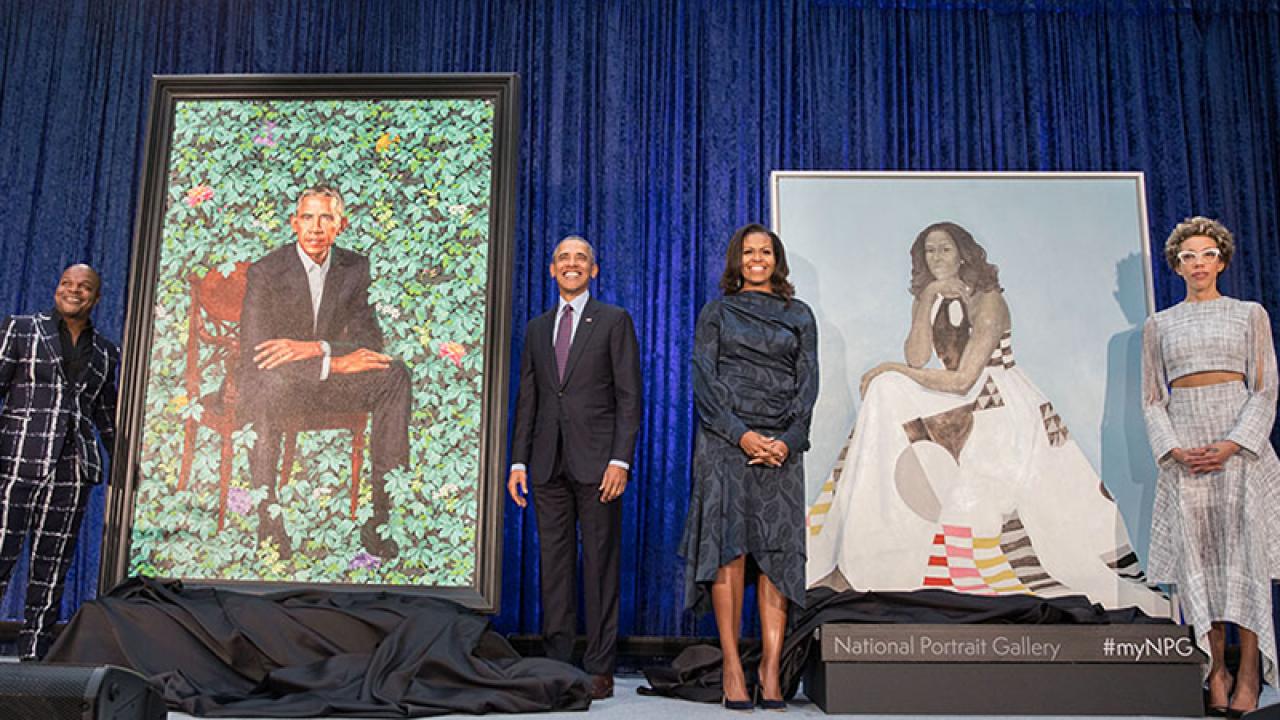 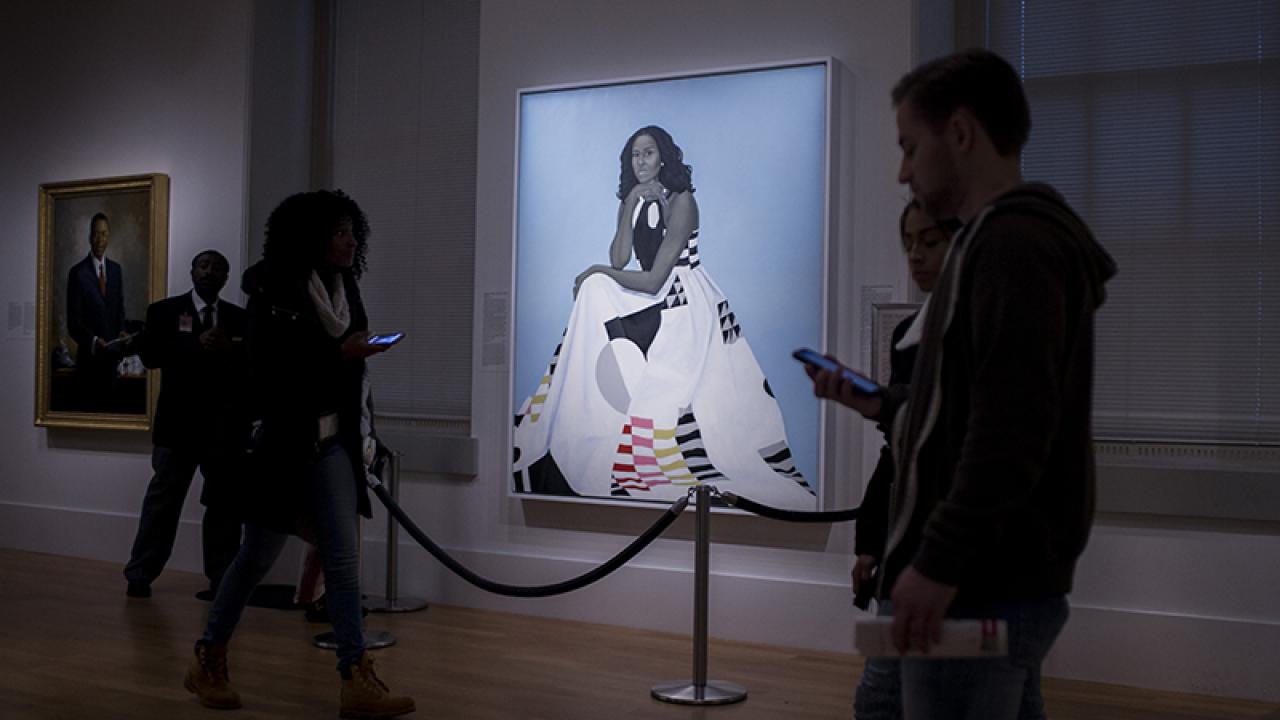 Opinion
The US Government Shutdown’s Hard Lesson for the Arts

Federal museums ensure that art is not merely the purview of the leisured class; the impasse is an abdication of that responsibility