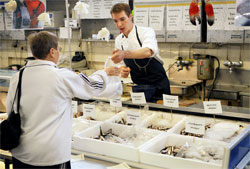 Kuopio is a small town set amid clusters of lush green forest and bound by a vast network of slate-black lakes. Over one crisp, cool weekend in September last year 12 otherwise unassuming local sites (including a bowling alley, bakery and crisis centre) dispersed throughout the town were activated by diverse performances. ANTI brought together an array of UK-based performance artists including FrenchMottershead (Rebecca French and Andrew Mottershead), Mad For Real (JJ Xi and Cai Yuan), Ange Taggart and Joshua Sofaer; Finnish artists such as Pia Lindy, Marja Mikkonen and Oblivia; and others. In its fourth year, ANTI contributed strikingly to a developing national engagement with the international scene.

Over the weekend the daily lives of unsuspecting people were continually disrupted by performances that varied from the subtle to the radical. Mad For Real achieved notoriety with their performance Two Artists Jump on Tracey’s Bed at Tate Britain (1999), and at ANTI they continued to wreak havoc with Monkey King at School (all works 2005). They led an unruly horde of face-painted children through the streets, reciting Maoist poetry, interrupting traffic and puzzled bystanders, before ending up drenched and freezing in a fountain. Less conspicuous disturbances were engineered by other artists, such as the collective IC-98’s distribution of illustrated leaflets protesting against the closure of a local plywood factory, or Otto Karvonen’s excellent Muikku with Conviction. Karvonen worked for eight hours a day in the indoor market, selling a type of local whitefish (muikku) that had been divided up and labelled as individually bearing different religious denominations. The stroke of brilliance lay in the baffled responses of the buyers, who wrangled with the implausibility of devout fish, though most tried in earnest to decide the relative merits of Christian, Hindu and Jewish marine life. Bemused customers opted either for a wishfully pluralist mix despite the apparent risk of conflict, or for the most popular choice: the more compassionate option of piscine Buddhism. Situated in an institutional space, this work would have lacked the eccentric logic that it attained through forcing a critical engagement with the ethical choices that we routinely negotiate, or sublimate, in the processes of domestic consumerism. Orchestrated with fantastic understatement, Karvonen’s intervention summed up many of the key ideas explored in the festival.

FrenchMottershead’s Five Shops, in which customers of five shops were provided with an instruction after each transaction was complete, whispered by a salesperson, or stamped on receipts, was similarly successful. Customers were provided with a specific time to return to the shop when their photo would be taken, to be exhibited later in each of the five shops. The piece balanced the risk of failure inherent in the likelihood of no-shows, with the strikingly beautiful photographic results of the venture. In the candour of their poses the photos echo the staged objectivity of Rineke Dijkstra and similarly explore relations between cultural uniformity and individual identity. Through the transformation of ignored routines into self-conscious performance, locals become sensitized to their daily surroundings. FrenchMottershead work by orchestrating ‘microperformances’, events they define as ‘a number of small, intimate actions, tasks or conversations performed anonymously on or by an active audience’. Prolific contributors to live art festivals since the late 1990s, the strength of their work paradoxically relies on the invisibility of their roles as directors. Their use of photography to record the unsigned interactions does not compromise the integrity of their intimate, anonymous manipulations.