The Appliance of Science 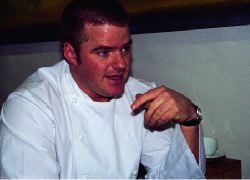 Heston is one of a select group invited to spend four days later this year holed up in a Sicilian monastery preparing meals and participating in discussions at a conference on the New Molecular Gastronomy. This is the scientific study of the behaviour of flavour in foods at a molecular level, developments in the understanding of which Heston has employed to create taste combinations that are surprising but successful. The trigger for his interest in this field is a perfect illustration of the commonplace that necessity is the mother of invention. In Heston's case necessity was the need to provide food for 45 covers when the oven had bust, and invention took the form of pans jammed in the door to regulate the heat. Today, however, his problems are altogether more Baroque (how to make savoury candyfloss, or to make ice-cream taste like scrambled egg) and his quest for the perfect solutions to gourmet questions takes him all over the world and took me quite by surprise.

Heston is particularly interested in the relationship between brain and palate. During our teenage years, many of us discovered what a powerful influence the former can exert over the latter when the cerebellum forcefully tells our taste-buds that it just does not like tequila, not after last time, no. Heston, though, has been exploring more subtle relationships. He points out that much of our experience of taste has to do with expectation, and that the celebrated crab ice-cream on his menu would barely excite comment if he named it 'frozen crab bisque': the brain would comprehend it as a perfectly acceptable version of a cold seafood dish.

This disparity was tangibly demonstrated on a recent visit to a Swiss flavourings company in possession of a taste-registering machine. (A sensor connected to a monitor is inserted up the nostril of a volunteer and registers what flavours are being released, while the volunteer describes what he or she tastes.) Acting as a guinea pig, Heston chewed on some gum, which after a while lost its flavour. Or so he thought. In fact the machine was still sensing that taste was present; it was just that his brain had bored of Sugar Free Extra, and was simply not bothering to register its flavour. Once the gum was taken out, rolled in sugar and fed back to him, his brain awoke from its torpor, stimulated by this 'new' flavour, and magically the taste of chewing gum returned in its full freshmint glory. It is the subversion of the usual relationship between brain and palate which excites Heston so much, and makes eating his cooking such an unnerving experience.

The lunch he prepared for us comprised eight courses: the usual three, plus various amuse-bouches, which is where Heston's experimentation is most forceful. Green tea and lime sour; pea purée, pigeon gelée, crab cream and truffle cocktail; mustard ice-cream and red cabbage gazpacho - all arrived before our main meal in tiny, perfectly crafted servings. These were each intensely different in flavour, but relatively undifferentiated in texture. The overall effect was curiously druggy: you didn't have to chew, just experience. I felt high; my companion thought she was Alice in Wonderland.

This careful anatomization of the various contributing flavours was employed in a slightly different manner in the main dishes. Heston and his team have mastered a technique of perfectly cooking meat so that it is evenly heated throughout. Rather than bunging it in the oven and perhaps turning it over a couple of times, his fillets are pan-cooked using an updated version of the spit, hand-turned every few minutes until the lamb is cooked through millimetre by millimetre. The temperature is carefully monitored so that it doesn't rise above 60 degrees, the point at which the proteins knot. The result is an almost vulgarly tender meat that retains all its succulence. However, as this method forfeits the rich, caramelised exterior of conventional cooking, Heston adds a complementary dish to the fillet: a roast onglet - a walnut-sized nugget of outer meat. In this way he separates out the two tastes present in the average roast and delivers them as discrete, intense sensations; it's a dish that does for traditional roast lamb what Cubism did for traditional painting.

Much of the menu at The Fat Duck involves various parts of animals that Gallic Romans may have snaffled down with vigour, but which the English palate is less accustomed to. We eschewed the pig's ear sauce, but decided on cod accompanied by a braised cockscomb, the distinctive shape and colour of which exerted a macabre fascination. I couldn't take my eyes off it; I really wanted it. After a mouthful I changed my mind. Like the dregs of all infatuations, mine turned to distaste as the cockscomb cooled and gelatinously clung to the plate, its pimply surface losing its bright hue.

Our main courses were followed by Heston's latest invention: white chocolate and caviar buttons. This dish resulted from the observation that salt complemented white chocolate - an aperçu that led Heston to create an appetizer of cockles and white chocolate. The kitchen gave it the thumbs down though, owing to the unpleasantness of textures involved. Caviar and white chocolate were a much more felicitous blend, which Heston proudly presented to the aforementioned Swiss company responsible for research into the chemistry of flavours. One of their tasters suggested that the unlikely success of this combination was due to the fact that if you break down chocolate and caviar into their respective taste-generating compounds (557 in the case of white chocolate), you would discover that they share quite a few: an overlap that enables the two to blend successfully on the palate.

Although everything we ate at The Fat Duck was good, and certainly revelatory, the desserts were the most successful as dishes. Perhaps because the various accompaniments - risotto , purée (sweetcorn), sorbet (coconut), ice-cream (bergamot and orange flower, smoky bacon and egg) and caramel (cumin) - are all perfect vehicles for pure flavour.

In fact, the overwhelming purity of the flavours that Heston serves sometimes seems to verge on the artificial. For all the delight to be found in trying each invention, my companion and I each tasted one dish that crossed the boundary into hyper-reality. For her it was the (sweet) avocado risotto that accompanied her chocolate dessert: after one mouthful she recoiled from it, muttering that it was Satanic. For me it was the smoky bacon-and-egg ice-cream (which I had been looking forward to because of a penchant for smoky bacon crisps). The sheer egginess of eggs can sometimes be challenging (see the opening scene of Withnail and I) and this ice-cream was initially aggressive in its smoky bacon flavouring and then extremely, surreally eggy in aftertaste. Which is quite an achievement for a teaspoon of gently melting ice-cream.

Opinion
On Earth with Senga Nengudi

As her retrospective ends at Denver Art Museum, the Colorado-based artist reflects on ‘tender-type beginnings to sagging ends’ of ageing sculpture and bodies