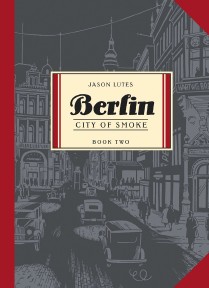 There’s nothing more satisfying than a convincing fabrication, and as the writer and illustrator Jason Lutes states, ‘comics is [sic] The Trickster’s medium’. Ten years ago Lutes undertook the ambitious project of writing a comic based on Berlin during the Weimar Republic. In his ‘Berlin’ trilogy he weaves a shifting cast of several fictional characters into the narrative of actual historical events and figures of the interwar city. Drawing in black and white, Lutes employs the ligne claire – the ‘clear line’ style, of which Hergé’s Tintin is the most famous example – to conjure a realistic picture of Europe in the 1920s. The first book, Berlin: City of Stones (2004), began by following the aspiring artist Marthe Müller’s introduction to the city in September 1928. The narration drifted like the wandering camera of Vittorio de Sica’s Bicycle Thieves (1948) or the eavesdropping angels from Wim Wenders’ Wings of Desire (1987), listening in on people’s thoughts before moving on among the political, economic and cultural polarities of the time.

This year sees the release of the second part of the trilogy, Berlin: City of Smoke. Political tensions are growing, following the violence of the May Day riots in 1929 and the crash of the New York stock exchange. Street clashes and anti-Semitism are becoming more prominent. The journalist and pacifist Kurt Severing aids Die Weltbühne magazine’s inquiry into the riots, resulting in a set of interviews reminiscent of the cinéma vérité of Chris Marker’s Le Joli Mai (1963). Meanwhile his editor, Carl von Ossietzky, is charged with treason for reporting on Germany’s illegal military rearmament. (Von Ossietzky, one of the genuine historical characters in the book, was in fact convicted in 1931.) Meanwhile Berlin’s extravagant night-life remains in full swing. Lute’s characters are carefully placed stereotypes – the gruff policeman, the working-class communist, the affluent Jew, the flippant socialite – imbued with personal ambivalence and at the mercy of historical events beyond their control. The main protagonists are an artist and a journalist, who, like their creator, are trying to make sense of the world around them in images and words. Amid the polyphony of political rhetoric and mundane musings Lutes examines how stories can become histories and vice versa.

The ‘Berlin’ trilogy is rooted in the traditions of literary Modernism: it was inspired by Alfred Döblin’s Berlin Alexanderplatz (1929), whose narrator shifts incessantly between first-, second- and third-person viewpoints, and which Döblin himself rewrote after reading James Joyce’s Ulysses (1922). Using the physically and literally kaleidoscopic comic form, Lutes turns the fragmentary visions of Ezra Pound, T.S. Eliot and Joyce to his advantage. Closing on the Reichstag elections of September 1930, which saw the first major rise in support for the National Socialists, Berlin: City of Smoke is an intricately woven collective portrait and an enthralling high point in the recent history of comics.