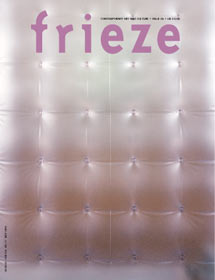 In the five exhibition rooms, an almost pretentious quiet prevails, emanating from the tonal shifts within expansive, monochromatic colour fields ruptured by delicate liquid flows. The visual and spatial unity of Callum Innes' exhibition is dependent upon a conceptually motivated painterly process: the application of monochromatic colour zones within a rigid geometry. Colour is stripped back or washed off with turpentine until the underpainting glimmers through or runs out. Trickles of seeping paint remain visible on the paintings as cloudy stained surfaces, dark edges and isolated rivulets.

Innes' new series, 'Exposed Paintings', was exhibited last autumn at Birmingham's Ikon Gallery, and the Bern Kunsthalle complemented the show with a selection of his earlier work. While the latter revealed a few lines or meandering furrows in a colour-saturated field, the 'Exposed Paintings' show more extensive sections, lifted from larger fields. Ultimately, every trace denotes a frozen moment in which the removal of paint has been discontinued. The remaining form carries evidence of its creation. Every painting in the exhibition shows itself as process, condition and result at the same time.

Early paintings, in which oil paint was dripped all over a shellac-sealed canvas, indicate the closeness of his painting to Informel. But the difference is that the relationship between the ground and the abstract figure is altered; the excavated painting support gains a second, later presence, as if the primary ground were lying beneath an uncovered one. Between the support and the revealed support stretches the time between painting and un-painting. What remains is painted: in the end, neither the application of paint nor the stripping process is reversible. The support continues to be a ground impregnated by pigment, confirming painting's paradigm: pigment on canvas, made to last. The process of paint removal doesn't mean a negation of painting, rather it is a gesture that hints beyond the application of paint. Innes' works have been discussed in terms of a photographic capturing of the moment, but a parallel with the film still would make more sense - implying a more provisional and tense relationship to movement.

Erased De Kooning Drawing, the nearly complete rubbing out of a Willem De Kooning drawing by Robert Rauschenberg in 1953, had an iconoclastic dimension - a radical gesture that demonstrated how a finished work of art could be transformed into something else. It was a gesture that provoked a confrontation: the end of static art, reduction activating emptiness. Innes never allows his erasures to be indifferent to content. Rauschenberg's gesture was a one-off. The developments in Innes' work will reveal whether his conceptual starting point can be extended, or if, in the end, formal variations on how an erased point relates to an erased line or an erased surface, will dominate.