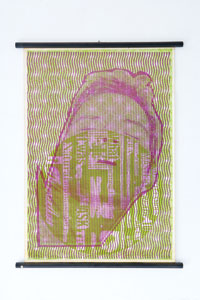 ‘The Garden of Disorder: Works and Publications by Charles Henri Ford’, curated by Daniel Buchholz, Christopher Müller and Mitchell Algus, featured a theurgic array of luminescent materials produced by the poet, editor, novelist, artist and filmmaker. A prolific producer of extraordinarily prescient range, Ford is perhaps best known for his editorship of experimental literary magazine Blues and of View – a Documents-esque glossy devoted to the Surrealist avant-garde of which he was part in 1940s New York. William Burroughs observed of Ford that, ‘Withal he is possessed by an enigmatic and eerie charm as a member of some spectral élite. He has the “mark” about him.’ A potent comment indeed when registered in the nefarious cast of Burroughs’ own ‘eerie charm’.

Objects on show included books, banners, collages, magazines and photographs that provided an overview not only of Ford’s frisky creative tempo but also of the times in which he produced. There is a sure hand present throughout the 60-year span of the work on display – in terms of style and content; however, this may be due as much to Ford’s ‘future-producing’ modalities of print output as to a historical tracking of one man’s life as an auteur. The show was squashed into the tiny Between Bridges space, which, although a fitting formal equivalent for the density of Ford’s poetry, made it very difficult to get a panorama of the breadth of pieces shown.

Among a selection of seminal books on show was a first edition of The Young and the Evil, the dirty roman à clef co-authored by Ford and Parker Tyler in 1933, which Gertrude Stein called ‘the novel that beat the Beat Generation by a generation’. Wrapped in a discreet brown cover, its title carefully printed in tasteful maroon lettering, the novel was rejected by US and UK publishers because of its experimental and saucy content – portraying, as it did, the escapades of a group of young gay artists and writers jumping in and out of rented beds across New York City – until it finally found its way to the infamous Obelisk Press in Paris, whose publishing profile could well accommodate even the most bitty, fractured or sexually explicit narrative. This was a key publication for Ford, in that it sited his writing within a lineage of avant-garde (and/or censored) works, demonstrating his influence over subsequent writers who also subverted traditional forms of genre.

Ford’s paste-up and collage poems from the late 1960s could be understood to be as much about the communication of information as about the information they communicate. Their scrappy surfaces appear perforated rather than consolidated by glued-on letters and words cut out from newspapers and magazines, in the style of presentation that is usually reserved for death threats and poison pen letters. One poem houses the killer line ‘Rods the size of a temple’, which succinctly encapsulates the forceful romanticism of Ford as poet-–collagist. These paste-up poems transport us as viewers/readers into the spreading power, the speed of turnover, the divine dissolution of the cut-up technique, demonstrating that significance and beauty can be excised from even the most workaday printed matters.

Produced around the same time as the paste-up poems, the Mexico City ‘Poem Posters’ series are much more calligraphic in their design. Agile silk-screen-printed letters glance and dash across the posters’ surfaces, saturated with Nu Rave citrics. These works have a louche holiday feel to them, which, while pleasant to drift into, means they lack the syntactic imperative of the collage poems on display; perhaps this is because their method of production is so much more surface-bound, resembling ‘art’ rather than ‘literature’.
Ford’s Layout and Camouflage Portrait of Robert Mapplethorpe (c.1975) is an incandescent image of the American photographer as a shining knight. Ford completed a series of ‘projection’ portraits during the mid-1970s, in which his sitters came dressed in white, posed in front of a white background and were transmogrified by his slide projector into interchangeable characters. In this case Ford re-imagined Mapplethorpe as a noble symbol; to his right vanquished villains lay slain on the ground (another projection of Pop sculptor George Segal’s plaster people). In an interview about the photograph, when asked if he saw Mapplethorpe as a ‘conqueror’, Ford (perhaps a somewhat unreliable narrator) replied, ‘I didn’t have any preconceived idea. It just came to me. It was the Surrealist way.’
This comment provides an interesting insight into Ford’s comprehension of his own process, significance and creative longevity. For while clearly seeing himself foremost as an instinctive producer, he is also suggesting the flow of history that such a long life of production can engender.