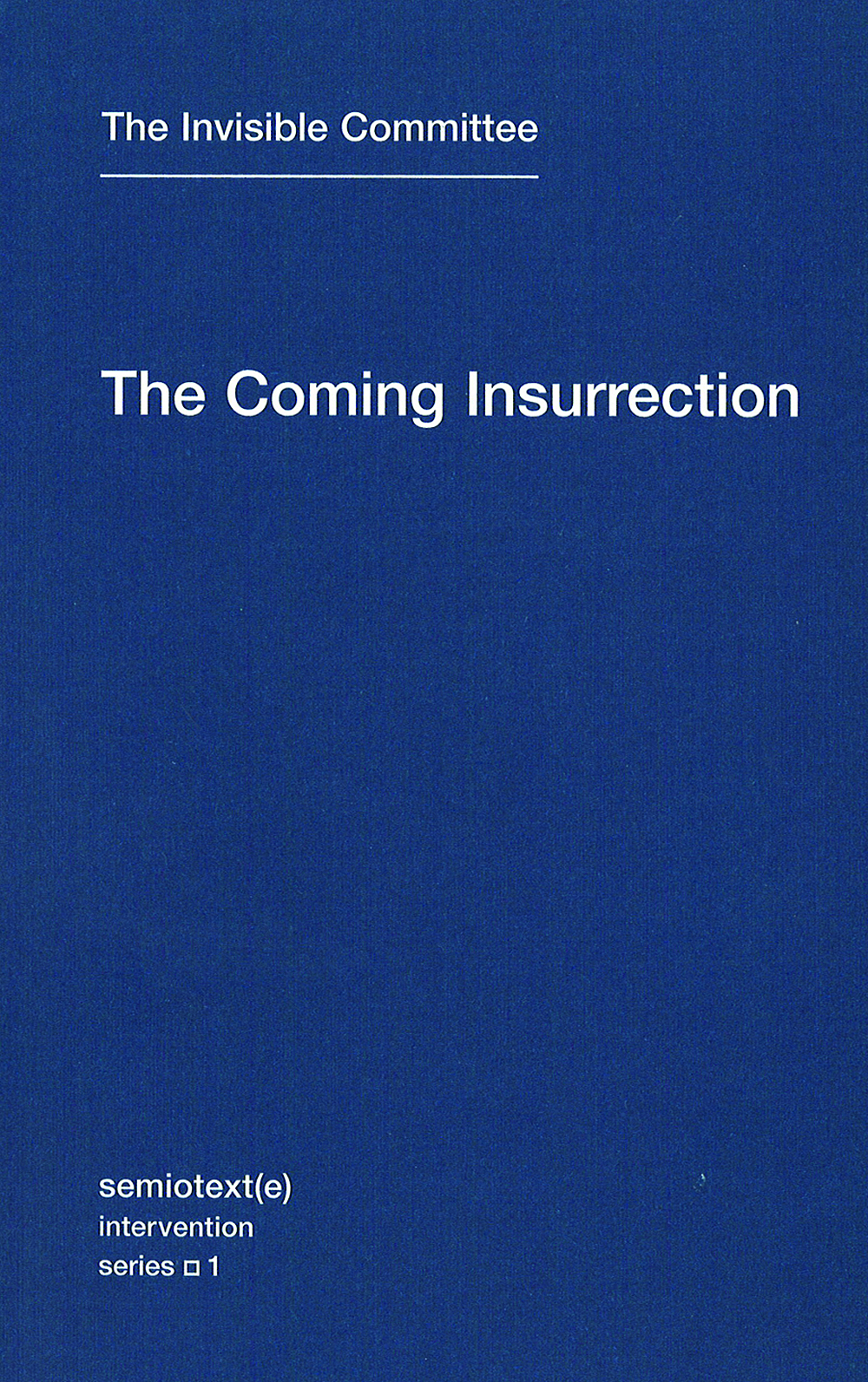 Any book indirectly responsible for massive raids involving helicopters and anti-terrorist police, a splenetic Fox News broadcast and an impromptu book-reading at a Barnes & Noble bookshop in New York (also attended by the police) must have something going for it. And so it is with The Coming Insurrection, the kind of political pamphlet last fashionable in the 17th century (and perhaps for a period in the 1960s and ‘70s). Authored by an anonymous collective, The Invisible Committee, and described by the French Government as a ‘manual for terrorism’, the book has become the main piece of evidence in an ongoing campaign against the rising threat of what has been termed the ‘ultra-left’.

While the authors of The Coming Insurrection may not be the same people as those arrested in November 2008 for ‘criminal association for the purposes of terrorist activity’ and for sabotaging TGV train-lines (named the ‘Tarnac Nine’ after the village where the suspects lived in a commune), many people, both critics and defenders, have assumed as much.

But why is the book causing so much trouble? Much of it is an impassioned cry against the state of the world as it is and an open call to revolt in a battle that has already begun: ‘We can discern more clearly every day, beneath the reassuring drone, the noise of preparations for open war’. The present, it states, ‘offers no way out’: beneath the self-satisfactions of Europe lie class-war, work-induced mental illness, and an emptiness from which culture can barely distract us. Amidst this critique are positive calls to ‘organize beyond and against work’, to ‘attach yourself to what you feel to be true’ and to ‘form communes’. If the positive programme announced here occasionally sounds a little strident, this is all part of the plan: for The Invisible Committee, contemporary cynicism is a tired pose demonstrably compatible with the demands to be a ‘good’ worker and a ‘good’ individual. The writers of this pamphlet, whoever they may be, are anarchists of sorts, advocating quasi-Luddite programmes of sabotage whilst promoting a form of self-sufficiency far removed from state intervention: ‘It’s a question of knowing how to fight, to pick locks, to set broken bones and treat sickness, how to build a pirate radio transmitter’.

It’s stirring stuff, apocalyptic and upbeat in equal measures. Perhaps the last word should go to Fox News presenter Glenn Beck, inadvertently giving the book the best, if grammatically garbled, review it will ever receive: ‘Europe […] is on the brink of destruction. […] This [book] is a sign that it is coming, and it is coming soon. […] People on the extreme left are calling people to arms. I am not calling for a ban on this book. It’s important that you read this book, you know what people are thinking, you know who the enemies are and you be ready when it does.’

Nina Power is a senior lecturer in philosophy at Roehampton University, London, UK, and the author of One Dimensional Woman (2009).