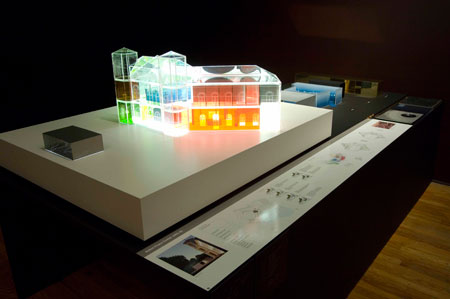 ‘David Adjaye: Making Public Buildings’, at The Studio Museum in Harlem, is one exhibition that should have been two: the first dedicated to the making of ten public buildings and the second to Adjaye’s photographic travelogue of indigenous cultures. While the work of this 40-year-old Tanzania-born British architect more than warrants the attention it is getting, the show fails convincingly to connect his wide-ranging and cosmopolitan palette of design work with the highly specific and culturally loaded buildings and artefacts they claim as inspiration.

The ten public projects on display are artfully arranged on individual pedestals, each of which contains three models at different scales, a selection of construction materials and an information panel. The latter systematically explains each building’s design with a sequence of straightforward drawings neatly punctuated by a small, single colour photograph of such things as a Ghanaian gold dust box, a Rwandan straw mat and a South African wooden neck-rest. The photographs’ position, at the end of a long line of formulaic diagrams, and their lack of ample explanation weaken their power. Problematically, the cultural, material and formal specificity so unique to these objects translates into building features that are far less so. When a Ghanaian comb becomes the striated wood cladding of the T-B A21 Olafur Eliasson Pavilion (Venice Biennale, 2005), or an intricately woven Malinese textile gets reduced to the all-too-familiar bar-code pattern on the façades of the two Idea Stores (London, 2004 and 2005), Adjaye’s references begin to feel like a means of legitimizing the use of fashionable architectural devices rather than genuine research.

A slide show on the east wall of the gallery expands on the architect’s fascination with all things indigenous: from the informal, self-organizing Brazilian favelas to the natural (and un-designed) shelters formed by stone outcroppings. While alluring, it does little more than further aestheticize such vernaculars and, like Bernard Rudofsky’s much-criticized MoMA show ‘Architecture without Architects’ (1964), fails to articulate the complex socio-economic and environmental forces that shape them. Surely one didn’t need to reference the tilted and irregular array of tree trunks supporting Malinese sunshades to build a tilted and irregular array of columns under the canopy of Wakefield Market Hall (West Yorkshire, 2007). By doing so, however, Adjaye risks reducing accumulated history to mere spatial effect. While the show’s spare text panels concede that the architect’s photographic study of capital cities and indigenous architecture ‘are not an exhaustive analysis’, one is left feeling that they should have been. Analysis bridges inspiration and design. It is what allows one architectural language to be read in terms of another.

Fortunately Adjaye’s smaller, collaborative projects (among the ‘timeline’ photographs on the west wall of the gallery) leave little doubt he is up to the task. Projects such as the SHADA Pavilion (London, 1999), with Henna Nadeem, or the British Pavilion (Venice Biennale, 2003), with Chris Ofili, convincingly demonstrate his ability to interpret an artist’s language in relation to his own. The canopy of coloured glass suspended over the central room of the British Pavilion both extended the space of Ofili’s paintings and successfully created an original architectural environment. These temporary pavilions, along with two of the architect’s solo installations – Asymmetric Chamber (Liverpool, 2003) and Length x Width x Height (London, 2004) – represent some of the more compelling work in the show and highlight the importance of Adjaye’s formative years at the Royal College of Art.

The most original of the ten public buildings on display are the ones that visibly benefit from this dense, smaller-scale research. The strongest among them is the Nobel Peace Centre in Oslo (2005), with its electrically lit, multicoloured Perspex model glowing like a lantern at the back of the gallery. Adjaye injected a series of discrete installations into the old Vestbanen railway station, forming a new spatial sequence programmatically differentiated by colour. Unsurprisingly, this is also the project that most persuasively relates to its indigenous inspiration. The Dogon village depicted next to the model is not only formally relevant (as a collection of ‘unique spaces contained within a powerful volume’); it also, like the Peace Centre’s strategy of adaptive reuse, represents its own local form of sustainable design.

A captivating film (with music by the architect’s brother) of five of the buildings successfully conveys their enigmatic potential as evocative mediators of light and time. As such, Adjaye’s buildings remain compelling and often beautiful, despite the sometimes loose links between the Minimalist material sensibility he acquired in the offices of David Chipperfield and Eduardo Souto de Moura and his interest in indigenous cultural practices. Although the exhibition seeks to bridge such seemingly disparate worlds, each is perhaps better off on its own.