It is said that it takes eight years for a sturgeon to mature, eight minutes to remove caviar from its belly and eight seconds to taste it. Shrinking exponentially, those numbers tell a grotesque tale of economic and environmental decadence. Numbers – random, consecutive, wildly escalating – also run across Georg Herold’s ‘caviar paintings’, yet his work refuses to conform to the reductive post-Marxist equations between art and the market so dear to younger artists. If caviar suggests conspicuous consumption, in Herold’s work it is also the aggregate of a Pop image and the Beuysian aura of pure material. Herold, after all, is in his mid-60s, old enough to belong to the generation that superseded the great German shaman.

Serpentine spills of caviar, affixed to canvases under varnish, meandered across the surfaces of two massive triptychs that faced each other across the width of Contemporary Fine Arts (each untitled, 2011). Tight clusters of handwritten numbers – some poor assistant’s Sisyphean labour – provide shadowing for the eggs, rendering them pictorially illusionistic. Both languages multiply from a seed: the tiny egg, the single number. Herold’s paintings may be straightforwardly spectacular, but they are also conceptually elusive. Resembling process painting of the late 1980s – such as Ian McKeever’s huge diptychs in which combinations of oil and acrylic triggered sublime chemical reactions – they subvert that model, investing material with symbolism. If caviar connotes wealth, the numbers evoke the babble of markets as the forms they create wind like the parabolas of economic graphs.

The snaking caviar trails found a sculptural equivalent in the curves of four reclining female nudes, laid parallel to each other on narrow plinths (each untitled, 2010). Constructed from cheap wood haphazardly screwed together, each sculpture was sheathed in either transparent chiffon or canvas sprayed with brilliantly coloured household gloss, consolidating what would otherwise appear as a tangle of disjointed timbers. One sculpture tested this tenuous perceptual coherence to the limit, its figuration held together by a pair of stockings pulled up to the ‘knees’. Laid bare as configurations of worthless materials, their Picasso-esque forms are also lurid symbols of expensive ‘modern art’. The caviar portraits (of Lionel Richie, Bertrand Russell, Sean Penn and others) also double as signs for already-existing value, mimicking Andy Warhol’s benday dots. They are a reminder that Sigmar Polke – whose hand-painted dot screens also parodied Pop art – was Herold’s teacher in the 1970s. Adapting caviar to the portrait genre emphasizes that eggs, like pixels, contain information and instructions for life, though here their growth is arrested by the resin sealant. Creating a likeness to life occurs at the cost of transforming it into stillborn decay. Get up close to the canvases, and they stink. Where a person’s likeness is created by the shading of numbers, the eggs, superfluous to the illusion, appear to attack the face like mould spores.

The subjects of Herold’s caviar portraits – writers, scientists, actors, musicians, philosophers – defy any more specific taxonomical categorization than that of an all-purpose celebrity club. Tightly hung in a cabinet room off the main space in a presentation that assumed the look of ‘art for sale’, the paintings are not only Pop but unashamedly popular. Herold flouts the risk of seeming meretricious and mercenary, and the impending hypocrisy exposes contradictions. The portraits resemble Arte Povera relics – siblings to Yves Klein or Piero Manzoni’s art – but what could be more of an oxymoron than Arte Povera made of caviar? In the same room, a bronze cast of a cheap kitchen chair hung from a wire (anders denkende Einrichting, 2010). It might be slightly raised from the ground or a few centimetres from landing, a weak defiance of gravity, or an almost complete succumbing to it. As in the paintings, an arrested natural process becomes an image of potential action. Herold’s chair seems to mock up a cartoon-version of the act of giving in to the world’s inexorable forces.

The chair’s bathetic fall contrasted with the graceful suspension of Herold’s site-specific installation Floating Lab (2011), which occupied the 200-square-metre gallery of Kunstverein Freiburg. Lengths of wood hung horizontally on wires, at around chest-height, mapping out a rudimentary maze, its geometrical structure only fully visible from the balcony of the first-floor gallery. Here, gravity was symbolically defeated, and with it mundane reality, economic and otherwise, released into myth. And yet the allegorical resonances of a labyrinth were simultaneously played off against a reduction of sculpture to minimalist modules of raw material extended through space. The installation delicately tested the limits of a capacity – or willingness – to narrate, or even to signify. The word ‘lab’ is a teasingly abbreviated form of ‘labyrinth’ but it also doubles as a hint at the possible status of the work as a pseudo-scientific experiment in which the viewer is cast as the hapless mouse.

The wooden structure, levitating in light blazing down from the classically gridded ceiling, implicated you in its web, dictating your movement, but only figuratively, in the sense that you could easily push it aside or walk under it. It was unreferential material as well as a diagram, as abstract as the numbers on the Berlin paintings. Both barrier and pathway, it objectified the viewer’s temporal and spatial negotiation of the exhibition, and – in its generic contours – of any exhibition space. The impoverished materials established a condition of abjectness from which viewers could symbolically free themselves as they were rewarded by splashes of caviar on five tiny paintings loosely distributed around the gallery walls. But Herold’s highly developed irony would never permit unqualified resolution. If the paintings were sudden windfalls or consolation prizes for the futility of your toils in the wooden maze, they were also merely fool’s gold. 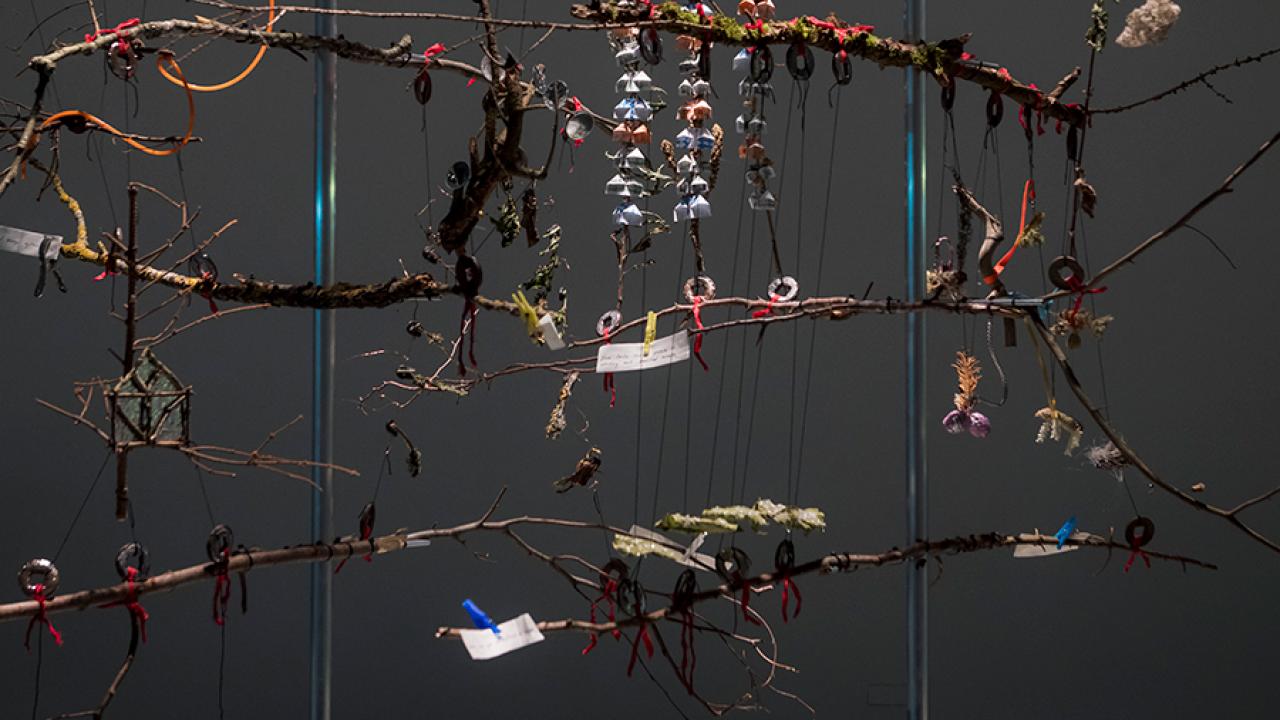 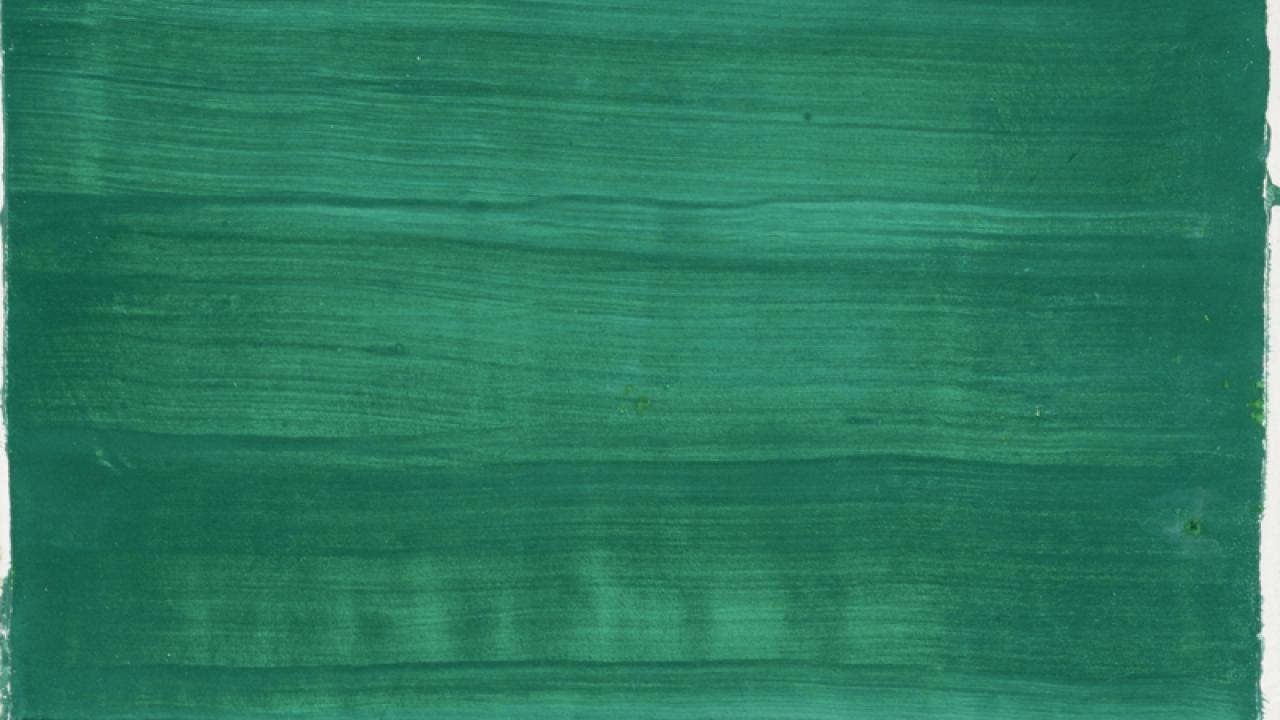 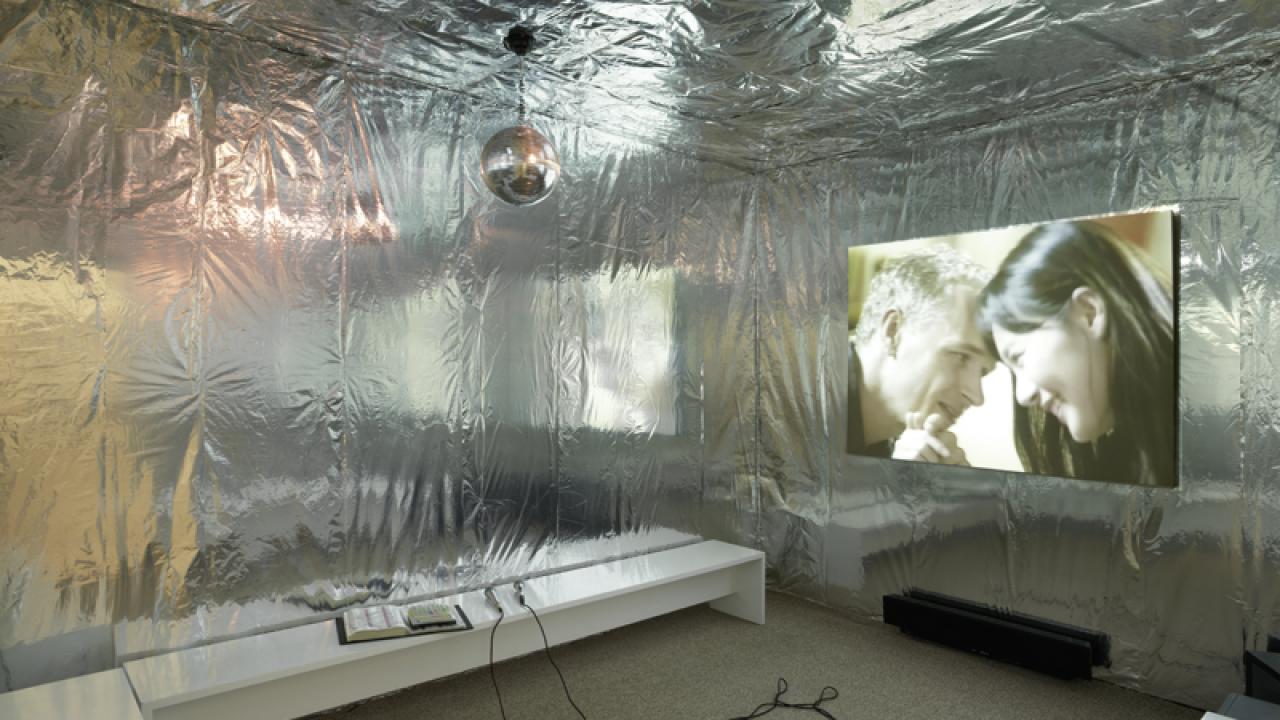 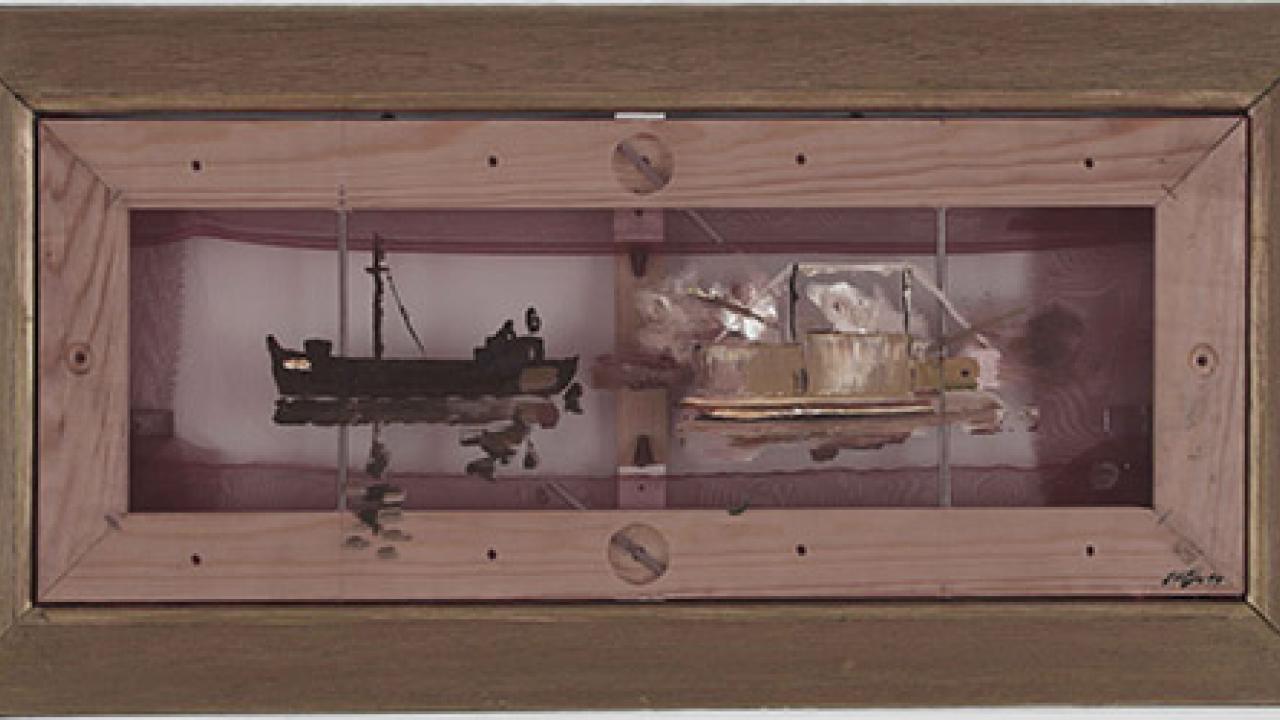 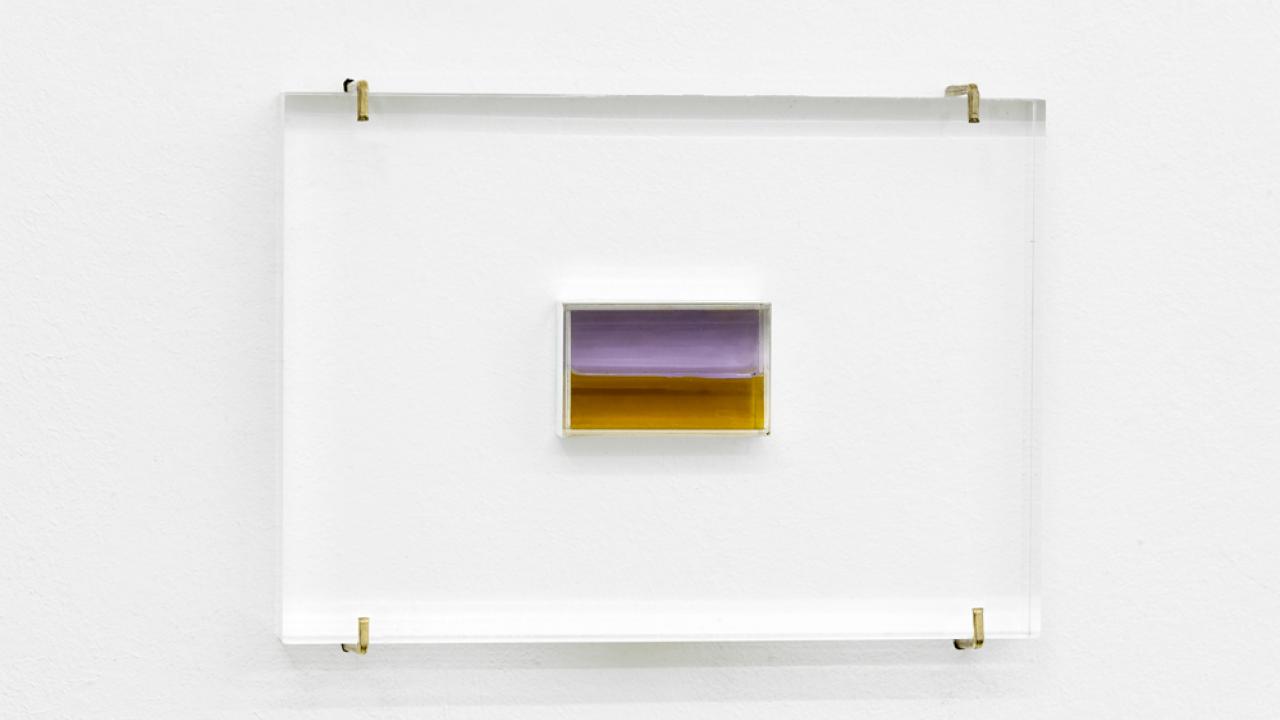 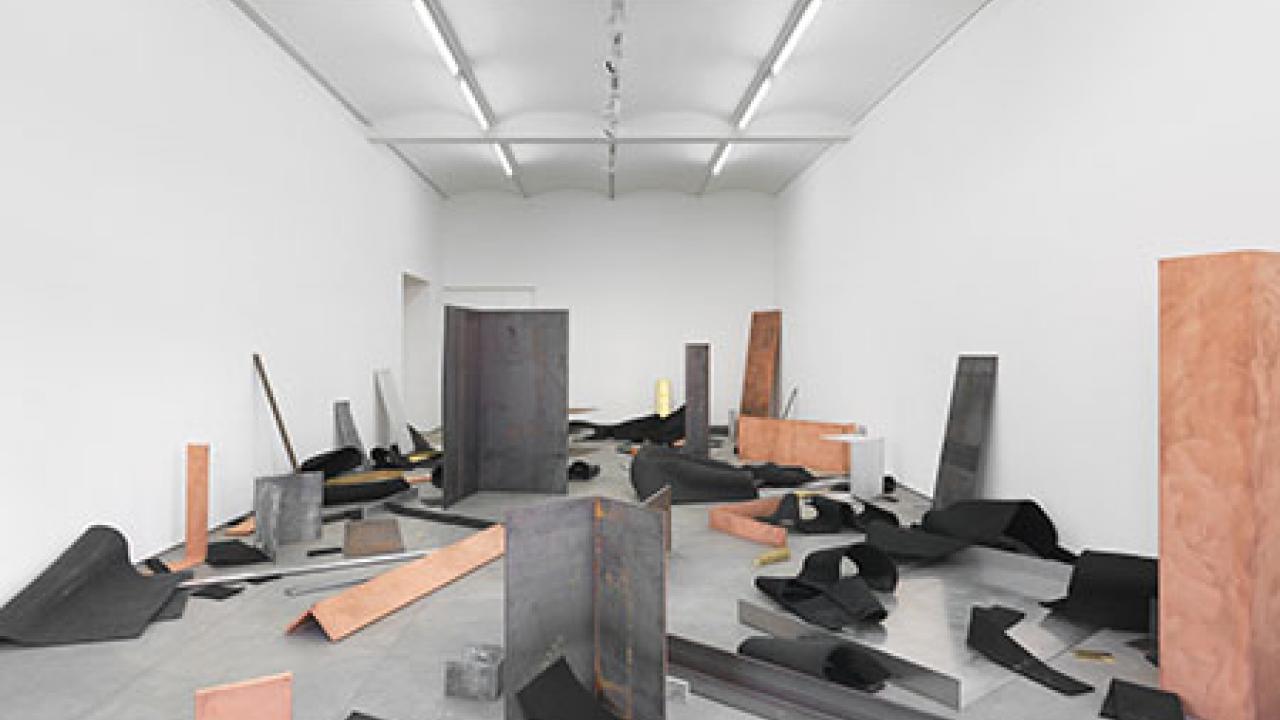