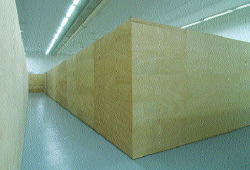 In TV interviews and press conferences Gianni Motti is surprisingly straightforward, reciting dramatic maxims on art and reality, or art and politics, with grave, wide-eyed sincerity. Not exactly the Motti one has come to know from his work, the slick, sophisticated activist who is casual about everything but irony. The artist kicked off his career in 1989 with Entierro No. 1 (Burial No. 1), a mock funeral for himself, in which his coffin was promenaded through Ribarteme, near Vigo, Spain, during the ceremony of Santa Marta. Motti's dramatic maxims and claims, such as that he caused the 1986 Challenger explosion and the 1992 LA earthquake, can be regarded as further examples of his calculated irony. But irony is, by its very definition, firmly linked to authorial intention, and the artist's hypothetical presence is of unexpected importance here.

After initial talk of a retrospective, at the Migros Museum Motti was expected to present his recent work, which explored the Raelians, a sect that maintains that aliens created life on earth through cloning technologies. However, Motti's show simply comprised a 600-metre corridor of undecorated wood panelling that spanned the entire vast space of the museum (Plausible Deniability, 2004). For the opening, security guards were posted at two points in the twisting hallway, preventing visitors from walking back to the entrance, ensuring a flow of spectators towards the back exit, which led to the winter chill of the courtyard of the Löwenbräu building complex. The guards were later replaced by tour guides, appointed to channel visitors through the exhibition. Sporting a polo shirt with 'Plausible Deniability' - the show's title - embroidered in cursive script, they walked you down the hall recounting stories and anecdotes, larks and capers from Motti's career.

The piece is undeniably an intelligent approach to the idea of a retrospective as a genre - storytelling and reminiscence replacing wall texts. It also does justice to Motti's work, the strength of which lies in its elusiveness, witnessed largely, as it is, through hearsay and art reviews, with the latter increasingly punctuated by entertaining rumours based on copy-and-paste methods of online research. In 1997 Motti reportedly sneaked into a UN session on Human Rights in Geneva and gave a speech in the name of an absent Indonesian delegate, prompting Native American representatives to rally to his cause by walking out of the assembly. Who was ultimately the butt of Motti's joke - the UN system of representation, the Native Americans or the art scene that bought the story - was never made clear.

So consider, if you will, a museum space filled with testimonies to tongue-in-cheek bravado. The comic aspect would easily override and eclipse any other facet in the work, and by the third or fourth example the frisson of impudence would vanish, reducing the work to a mere coffee-table collection of naughty jokes. With Plausible Deniability, by contrast, visitors were asked to recollect Motti's oeuvre themselves, or to consider their role as a spectator, or simply to wonder just what it is the artist thinks he's doing.

As Motti's reputation as court jester of the art establishment becomes coupled with a piece as radically taciturn as this one, the critical reception becomes both predictably flamboyant and awkwardly personal. It inevitably falls back on the contradictory persona of the artist as its vital, irresistible point of reference. A 'daring' joke on the art market, an 'arrogant' display of audience control, a calculated example of épater les bourgeois, a 'political statement' - with the security personnel being a possible reference to the heavily guarded World Economic Forum that took place in Davos around the time of the show's opening, and a museum employee in a silly poncho who was widely interpreted as a Motti-designated WEF demonstrator. Others - local newspaper critics in particular - seized on what they considered a welcome occasion for conniving, puerile bluster. ('Is it art? Who cares! Ha-Ha!')

Entierro No. 1 reportedly ended with Motti hopping out of the coffin, with unsuspecting witnesses overcome by the miracle of resurrection. Plausible Deniability, for its part, frees the viewer from having to marvel solemnly at a neatly packaged 'Gesamt'-oeuvre, replacing it with a reinstatement of the enigmatic artist figure himself, traditionally engagé and yet coquettishly Postmodern, looming large on the horizon of expectation, just beyond the panelling secured by guards and tour guides.