Dutch historian Johan Huizinga’s 1938 book, Homo Ludens, argues that play both predates and defines culture. In this expansive exhibition of the same name, curator Ricardo Sardenberg has included more than 50 works by nearly 30 artists that deal with the ludic, or child’s play. The works on view suggest that children often first negotiate the world as a series of games; such games, however, do not always have clear rules, opposing players or final scores. In this show, as in the real world, the stakes are not so simple.

Chessboards, dice and treasure maps abound. The show opens with Agnieszka Kurant’s Speculations (1) (2016), a chess match whose pieces, although in play on a board, remain awkwardly packed in tiny, individual crates. Elsewhere, Montez Magno’s sculpture Um lance de dados não abolirá jamais o acaso (A Roll of the Dice Will Never Abolish Chance, 1973), a hand holding die, literally figures an eponymous Stéphane Mallarmé poem. To increase the available display area, the main gallery space has been partitioned with a series of unprimed plasterboard walls. At times, these can be distracting, as when they offset understated works like Beto Shwafaty’s PlayTime (2016), a list of synonyms for ‘play’ (‘produce’, ‘protect’, ‘consume’, ‘politicize’, ‘capitalize’). However, the partitions serve as a fitting backdrop to Jorge Macchi’s Periplo egeo (Aegean Voyage, 2012) – emergency tape declaring ‘PELIGRO’ (danger), and various anagrams of the word – which wraps around a wall hollowed-out to reveal a metal support beam. On it rest two tiny bronze sculptures: Ana Mazzei’s Guardiã (Guardian, 2013) and an untitled 2001 abstraction by Saint Clair Cemin. Here, the unfinished walls are an apt evocation of the improvisatory nature of childhood games.

Several works by the artist Marepe deal with issues of class, such as a video featuring the warm-up routines of a Bahian football team: an institution that gives the region’s poor a sense of belonging and local pride. Museu (Museum, 2014) – an installation of traditional handicrafts made of wood, sticks and tin cans found at markets and stores in the region, along with ceramics, dishware and signage for a Bahian superstore – presents a collection of apparent ‘junk’ as a museum-quality display in a commentary on the classism of
art institutions.

The exhibition also plays out in the gallery’s office spaces. Nelson Leirner’s Paleto (Coat, 1967) hangs flat against the wall beside the archives, providing a stark visual contrast to Renata Lucas’s nearby installation, Geometria Evasiva (Evasive Geometry, 2016), a display of floor tiles into which a newspaper has been inserted. The clash of signifiers for work and play, and the crowded installation throughout, presents a challenging environment for the visitor; though it’s conceivable that Sardenberg felt a more restrained hang would be ill-matched for his subject of unbridled play. Down the street, the show continues in Luisa Strina’s second, original gallery space. In stark contrast, this iteration includes far fewer works to a more considered effect. Here, Cildo Meireles’s Glovetrotter (1991), a dimly lit installation of sports balls covered in metal mesh, joins Rivane Neuenschwander’s Cabra-cega/Blind Monsters (2016), a series of illustrations inspired by sketches in a child’s notebook and drawn blind, which is projected across the walls. 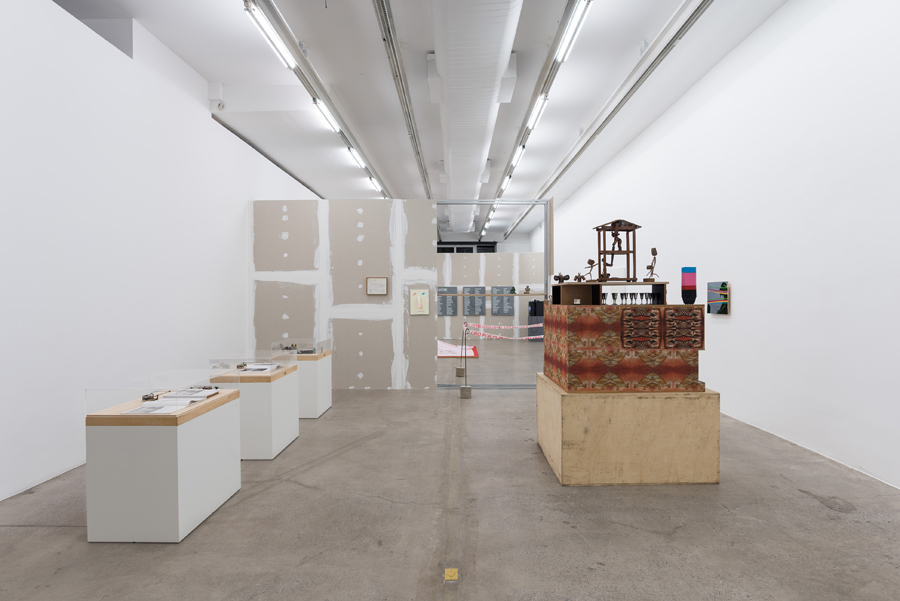 In Brazil’s current political climate, a show on the subject of play is a loaded proposition. The exhibition opened the same day that former President Dilma Rousseff was removed from office by the Brazilian Senate, and barely a week after the Olympic Games in Rio de Janeiro had ended. Sardenberg may not have set out to curate a political show but, given this context, it is tempting to regard these works as allegories for the many contentious and complex contests of life.