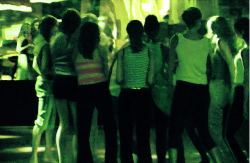 Jean-Marc Bustamante has had two lives as an artist. Initially he was a photographer, learning his trade as assistant to William Klein and forming his own style, a kind of Conceptual documentary, in the late 1970s. Later he became a sculptor: fellow Frenchman Bernard Bazile drew his attention to objects and sign systems, and the two teamed up, exhibiting as Bazile/Bustamante throughout the mid-1980s. But ever since, Bustamante seems to have been living both lives at once, and the effect is rather odd.

Much of this recent show, 'Nouvelles Scènes' (New Scenes), would have been familiar to visitors to the Venice Biennale last year, where Bustamante represented France. Four works from the series 'Amazone' (2003) formed the photographic centrepiece in London, while three images from the 'Lumière' (Light) series (2003) hung alongside. Since the late 1970s Bustamante's images have often depicted the churned-over, semi-developed or baldly artificial character of much modern landscape. Generally these have been unpeopled, but 'Amazone' approaches the portrait genre, showing individual figures, mainly young women, inhabiting a fully administered, dog-walker's, Sunday-afternoon-stroller's kind of wilderness. The figures don't so much pose as momentarily pause, though this informality seems very much an accomplished effect, given the large size and the splendour of the prints.

'Lumière' depicts what appears to be an adolescents' disco: people huddle stiffly in groups, directing nervous glances through the lights and mirrors. It's suburbia once again. The images originally came from the Internet and are fairly unremarkable in themselves, but Bustamante has inflated their scale, corrupted their colours into pale blurs and applied them to Perspex, using a seriographing technique. If the kids had racing pulses when the pictures were taken, Bustamante's versions seem intentionally chilly and pre-processed, as if their pictures had been passed through every relevant level of representation from teen magazines to advertising to social surveys, losing a little bit of themselves at every stage.

There is very little in these images that might immediately suggest a bridge to the artist's sculptural practice, but their Perspex support suggests a clever, double-edged ethic of truth to materials that might lead him back to his suburban preoccupations. Bustamante happily reveals the support by allowing us to see straight through the image in a few spots, and it suggests exactly the cheap, scratchable, safe and transparent sort of stuff that furnishes community dance halls.

The installation Larva 1 (2003) also suggests that it is at the level of design and materials that Bustamante's two divergent practices touch. Like a model for some extravagant floor or wall surfacing, the work comprises 12 metal panels cut down to form a polygon, sits about six centimetres above the floor and takes up a large expanse of the front of the gallery. The panels, which are made up of metal grids, afford a view of a shiny orange base below: a river of orange flows the length of the sculpture. Over the rest of the panels light reflects off the treated metal surface, making its colours separate into gleaming pools as if to suggest a beautifully oily bed of liquid like a shattered liquid crystal display.

Scintillating colour effects aside, Larva 1 strives to articulate a clear sense of shape and scale; although it doesn't seek to define spatial volume, it still somehow addresses the viewer simply by crowding the space. In that respect it accords with Bustamante's loose references to phenomenology when discussing his sculpture: the heritage of his work is in Minimalism. His images, on the other hand, have often been compared to those of Jeff Wall and Thomas Struth, and indeed they offer something of both the cerebral wordiness of the former and the more unabashed and urbane pleasures of the latter. The images don't engage with the sculpture's Minimalism; they merely sit alongside it, sometimes looking comfortable, sometimes not. The reason for this peculiar separation is no doubt buried in the unusual circumstances of Bustamante's early career (it is significant that his work went largely unnoticed until he began to make sculpture with Bazile). It need not be seen as a flaw; indeed it's intriguing to see how Bustamante negotiates both arenas. Ultimately he draws together two halves of contemporary suburbia, its image world and the stuff of its manufactured habitat, and the fault-line that's left in between makes his work all the more engaging.