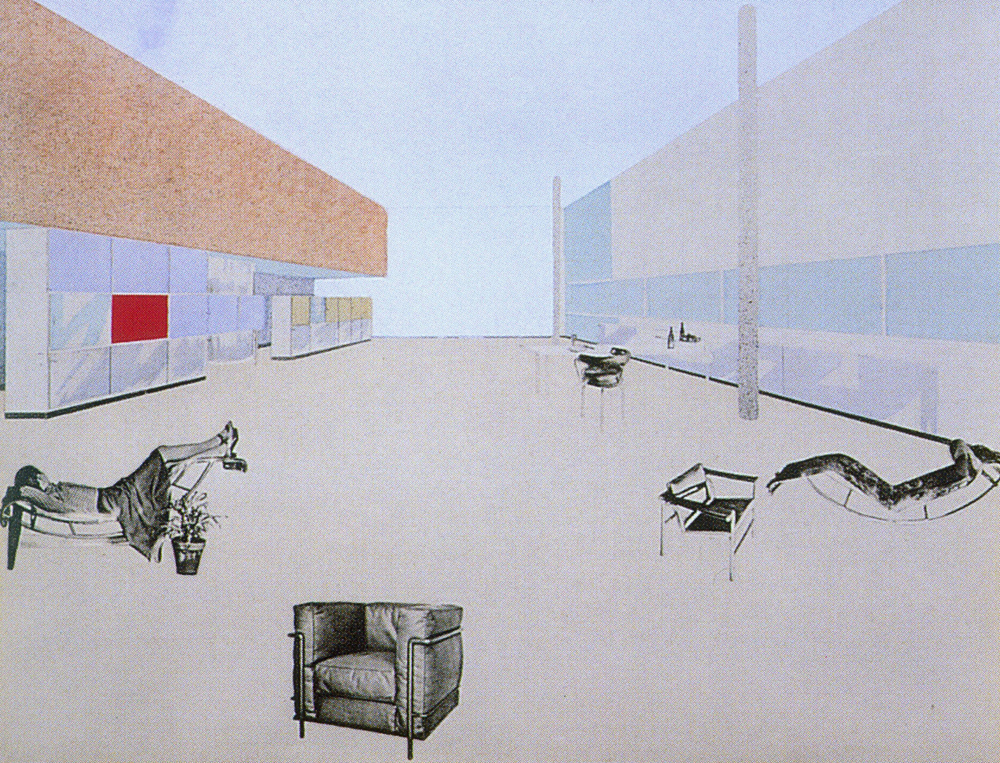 Liverpool’s Roman Catholic Cathedral, completed by Sir Frederick Gibberd in 1967 and known with local lack of ecumenical tact as ‘Paddy’s Wigwam’, was an apt setting for a survey show of Le Corbusier’s art and architecture. Not that the building’s spiked hump (a possible precursor to Oscar Niemeyer’s rather more elegant cathedral of Brasília, of 1970) itself enclosed the drawings, paintings, photographs, models and other artefacts that comprised the exhibition. ‘Le Corbusier: The Art of Architecture’ was rather installed in Edwin Lutyens’ vaulted brick and granite crypt, all that remains of the architect’s plan (abandoned after World War II) for an edifice twice as high as St Paul’s Cathedral in London. A space more often devoted to beer festivals, the crypt seemed to embody some of the present moment’s ambivalence about Le Corbusier and about Modernism in general: the show existed somewhere between dutiful homage and Utopian reanimation.

Three discrete sections notionally corralled Le Corbusier’s career. In the first, ‘Context’, the six cities that were most important for his work were explored. Here were models, drawings and films for his Plan Voisin (1925) for Paris: a vision of urban destruction and rebirth that now seems quite of a piece with Surrealist fancies of the era: ‘I dream of seeing the Place de la Concorde empty, solitary, silent,’ he wrote, as though in a fugue that revisits Baron Haussmann via André Breton’s Nadja (1928). Here too was his elegantly sinuous, no less destructive, plan for Algiers: Plan Obus (1932) would have torn down over half of the kasbah and turned the coast into a vast apartment block, topped with a motorway. The ‘art’ of the exhibition’s title seemed here a matter of baroque fantasy rather than modernist rationalism: in fact, much of the value of ‘Le Corbusier: The Art of Architecture’ lay in its revelation of how close, at times, the revered intellect of architectural history (albeit rounded off in later life by his turn to the ‘primitive’) was from the start to visionary thinking from Charles Fourier to Georges Bataille.

The second section, ‘Privacy and Publicity’, contained artefacts from Le Corbusier’s interiors: a reconstructed kitchen from the Unité d’habitation in Marseille (1947–52) felt cramped and provisional compared to the filmed expanses of the building’s playful roof terrace. It was the final section, ‘Built Art’, that promised the clearest fulfilment of the show’s title. Here the architect’s paintings competed with wooden models of such late masterpieces as his chapel of Notre-Dame-du-Haut at Ronchamp (1950–5), and the vast undulating plain of his administrative complex at Chandigarh in northern India (1951–64). Time and again, however, the exhibition failed to convince that Le Corbusier’s art was at all interesting. Where his late architectural turn to archaic and elemental forms still seems energetic and strange, the persistence of such primitivism in his painting simply makes him look out of date in his own time. One could not help thinking of the Irish designer Eileen Gray’s horror when she discovered that Le Corbusier had ‘vandalized’ E-1027 (her house at Roquebrune-Cap-Martin) with his murals.

Famously, Le Corbusier designed nothing in Britain apart from a display stand for the Venesta Plywood Company, installed at the Building Trades Exhibition in London in 1930. His influence, however, was crucial for the postwar housing projects of the nascent welfare state, and his name was, for a time, synonymous with their frequent infrastructural failures and social costs. For this first British iteration of ‘Le Corbusier: The Art of Architecture’ (the exhibition moved to the Barbican Gallery, London, in February), a short section had been appended that detailed such projects as Park Hill housing estate in Sheffield, Roehampton estate in London and the now ruinous St Peter’s Seminary near Glasgow.

Nobody could wish on such a sedulously researched and well-appointed exhibition that it should have to rehearse once more certain local arguments about the history of Modernism in Britain. But there was a sense in which these few photographs of ill-funded domestic knock-offs of Le Corbusier’s real art incarnated more of the optimism of the modernist project than the exhibition itself had quite conveyed. Which impression may well have more to do with the archaeology of Modernism currently under way among contemporary artists than with the unarguable thoughtfulness and comprehensiveness of ‘Le Corbusier: The Art of Architecture’. That’s to say: this was, curiously, the only point in the exhibition at which it seemed that something was still at stake – a history worth not repeating, but a future still in waiting.