In 'Life in Film', an ongoing series, frieze asks artists and filmmakers to list the movies that have influenced their practice. 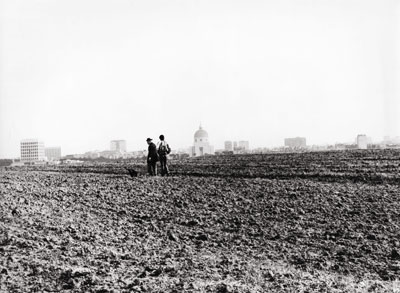 James Benning has been making films since the early 1970s. His most recent works, RR and Casting a Glance (both 2007) are about freight trains crossing American landscapes and Robert Smithson’s 1970 Spiral Jetty.

Every so often I teach a course at California Institute of the Arts entitled ‘Looking and Listening’. Each week ten or 12 students and I go somewhere to practise paying attention. We spend a whole day crossing an oilfield, an early morning watching the sky gain light, ten hours on the local buses or a night along 5th Street in the homeless section of downtown Los Angeles. We find looking and listening to be a political act, our differences in perception reflecting our individual prejudices. Occasionally I am asked to teach this course elsewhere. Last spring I did it in Mexico City. After spending the day in a large industrial area, I asked, ‘What did you see and hear?’
Student one: There was a white wall on the opposite side of the street. It was very bright. On the right there was a small door that was recessed a foot or two, causing a rectangular shadow to fall upon the door. On the left side there were two more doors that were quite large, but they had no shadow, since they weren’t recessed. It was relatively quiet – that is, just an overall industrial ambience. Then after some minutes someone exited through the small door. The shadow went from a rectangle to a triangle and back as the person opened and closed the door and disappeared down the street. Then nothing happened for a long time. But finally the two other doors opened inward, revealing a negative space with the faint presence of two men working somewhere in the back of the black void. One of the men ignited a welding torch and sparks flew. The outside wall remained bright. The rectangular shadow got longer.

Student three: A railroad track curved its way back between two old factories. They sounded like foundries but weren’t. I’m not sure what they were. People lived in makeshift homes along both sides of the tracks. There were children and dogs. Right where I stood a road crossed the tracks. Vehicles coming down the street would brake due to the bad condition of the crossing. As they passed, I could hear part of a conversation or the sounds of a radio. Words and songs came and went. A large truck didn’t slow and crossed with a loud bang. All the dogs began to bark.

Student four: I watched three men unload a boxcar full of yellow powder. They had a long tube that sucked the powder out of the car. One of the men held the tube, alternately filling burlap bags held by the other two men. As soon as a bag was full, the man would seal it and place it on a pallet. When the pallet was full (about 50 bags), a forklift driver would haul it away. Then one of the men had the added task of getting an empty pallet to replace the full one that had just been carted away. I watched for two hours. The process never stopped. The sound was like flowing sand but was hard to hear over the noise of a gasoline-powered compressor. They were working on their third pallet when I left.

Student five: There were about 20 workers outside the factory on a break. Some sat on benches provided by the factory. A man in dark blue overalls was talking to an attractive young woman. They were both standing. She too was in blue, but it was a very fine dress. You could see the shape of her body through the fabric. Perhaps she was a secretary or part of management. I couldn’t hear what they were saying, but I could tell they were flirting by their body language. Three women in yellow overalls were sitting together, smoking cigarettes and laughing. Two men on the left were engaged in a serious conversation. They too had blue overalls. Then a bell rang, and they all walked back into the building. It was orange.

Oh, and this morning I saw another amazing film. I was at my school, which has been rented out to a high school summer arts programme. The halls were filled with teenagers. Off to the side in one of the main galleries a young man was playing Erik Satie’s Vexations (1893), a piano piece with 840 repetitions that is composed to go on for ever. I went in and listened for a few hours. What a treat and surprise to hear this being performed. Occasionally a few students would come in, most of the time for less than a minute, and then wander off. Two young girls stood in the doorway for 30 minutes, mystified and perhaps a bit afraid to enter the genius of this work. They reminded me of myself, the first time I saw and heard John Cage. Then a blind student came in and sat down. He carried a red and white cane that folded into itself. He listened intently and was still there when I left. Imagine what he saw.